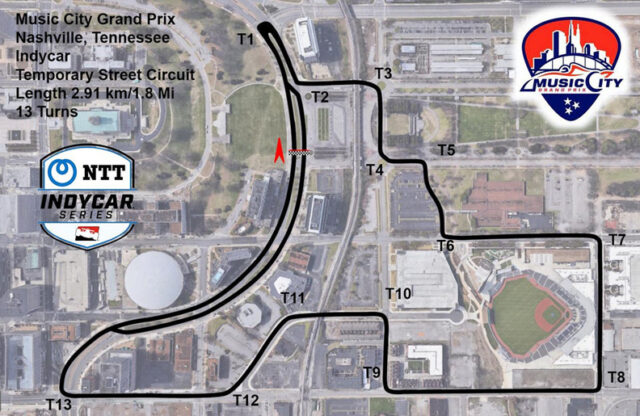 For the first time since 2013, the 2021 NTT INDYCAR Series will have a new street course venue to tackle. The Inaugural Music City Grand Prix will take place August 6-8 in downtown Nashville, TN and around the Nissan Stadium area, home to the NFL’s Tennessee Titans and including trips across the city’s Korean Veterans Memorial Bridge.

The 2.17-mile temporary track becomes one of the only events in modern-day racing that will cross over a major body of water, the Cumberland River. Drivers will be challenged by both very fast long straights and challengingly tight turns on the newly-devised 11-corner circuit.

In making the announcement on September 16th, less than a week after a successful, fan-included two-race return to permanent road course Mid-Ohio Sports Car Course, INDYCAR noted the one-of-a-kind nature of this new track and the series’ desire to show the sporting nature of the city that spawned two-time and reigning series champion Josef Newgarden. “Nashville is a world-class city and global entertainment capital that provides an exceptional platform for our series,” said Mark Miles, president and CEO of series owner Penske Entertainment Corp.

“From professional sports teams and top live music acts, to a burgeoning food and culture scene, it is a perfect home for a racing event of this magnitude. Urban street festivals have become a huge part of our DNA at INDYCAR, and this three-day festival – complete with a course that pushes the limits – will highlight everything Nashville and the sport have to offer,” Miles continued.

This race has been in the planning stages for more than a few years and is the culmination of behind-the-scenes work to make sure the venue was settled prior to the announcement, made by Miles, Nashville mayor John Cooper, Titans president and CEO Burke Nihill, Matt Crews, CEO of Music City Grand Prix, together with representatives from INDYCAR. The president and CEO of the Nashville Convention and Visitors Corp., Butch Spyridon was an active and avid participant.

INDYCAR and the organizers of the Music City Grand Prix intend to make the race into a three-day festival, taking cues from the Acura Grand Prix of Long Beach, the country’s longest-running and most successful street race. Newgarden, driving for Team Penske and actively seeking his third and second-consecutive season title in the NTT INDYCAR Series, understands the allure of racing in Nashville for series competitors. “When you think about INDYCAR racing, certainly on a street circuit, it is an event that you don’t want to miss,” he said. “For me, it’s going to be probably the second most pressure-filled event to get right. We always mark the Indy 500 as a key point for us. How do we win this race with Team Penske next year?” Newgarden mused.

The Tennesse-bred racer also noted the dearth of venues during the month of August in INDYCAR, stated that the drivers “love the date of the race. Please don’t change that. We love that it’s a three-year commitment so we have the opportunity to truly build this into the best INDYCAR race in the world. That’s our goal: we want to be a festival; we want to entertain.”

Nashville hosted the 2017 NHL Stanley Cup Finals, the 2019 NFL Draft and is widely known for its involvement in other major sports. In addition, the downtown area of Nashville is home to many fine dining and, of course, music venues that should entice race-going visitors from around the United States and worldwide when the Indy cars come to town.