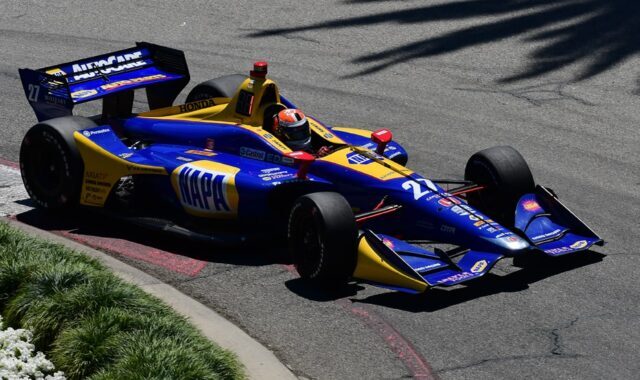 The streets were bare and quiet in downtown Long Beach, California this April, after crews removed grandstands, walls and fencing they’d erected in anticipation of the 46th annual Acura Grand Prix of Long Beach. The track had been close to being built by the second week of March, with only finishing touches remaining.

Then the novel coronavirus hit. Grand Prix president and CEO Jim Michaelian pretty much figured there was going to be a problem when, during his visit to the NASCAR’s February race at Auto Club Speedway in Fontana, he received a text telling him one of the largest conventions the city annually attracts was canceling its 2020 visit. He turned pale and left the track shortly after receiving this notification.

Like most every activity, Long Beach’s race was done for the year. A race that customarily attracts more than 175,000 for a three-day beach party, accentuated by a variety of motorsports competitions, the Acura Grand Prix was silenced, amid great pain for competitors, fans, organizers and financial partners. INDYCAR did have a shortened season in 2020, but it didn’t include Long Beach.

The NTT IndyCar Series announced its ambitious 17-race 2021 schedule as October began, and slotted Long Beach in its traditional slot, at mid-April, right after the natural road-course contest at Barber Motorsports Park. At the time, the second wave of the pandemic hadn’t hit, but it still looked iffy to many in the city. Now California is pretty much shut down with increasing cases of COVID-19 making everyone apprehensive. April was not looking positive for the venue to hold an open event with customary fan participation.

Finally, the series realized it had a problem on its hands. Long Beach is, without argument the second most popular and successful event on the INDYCAR calendar, lagging only the Indianapolis 500. The setting is great for fans and participants, the action is usually excellent – although there have been some truly unimaginative contests over the years – and it’s a venue everyone wants to attend, whether working or playing.

INDYCAR made a proper decision. For 2021, the 46th Acura Long Beach Grand Prix will be the season finale, the 17th race of the year, not the third (leaving the series with serious lags between St Petersburg on March 7th and Barber on April 11, before heading to Texas the first of May). The race will culminate a western swing that begins on the 12th of September at Portland International Raceway, goes to WeatherTech Raceway Laguna Seca a week later and lands adjacent to the Pacific Ocean on September 26th.

The change does elongate INDYCAR’s season to the end of September, something fans of the series have wanted – actually, they’d prefer the season end in October or even November – and this series of races means personnel can remain in the Oregon-California sphere through much of the month. Adding to the positive news, the popular IMSA, vintage and stadium truck events will participate on the rescheduled weekend.

The first Long Beach Grand Prix, which was a USAC/SCCA co-sanctioned Formula 5000 event, occurred the weekend of September 26-28, so this does bring the race back to square one in many ways, although it wasn’t the F5000 finale. While the 2021 race is the contest’s 46th, now that the 2020 event faced its cancellation, it’s also the 37th time Indy cars have regaled fans at the World’s Fastest Beach Party.

“I want to thank all of the officials at INDYCAR for their assistance in rescheduling the 2021 Acura Grand Prix of Long Beach to September,” Michaelian said. “We believe the this move will afford us the best opportunity to provide our guests with a fun and exciting experience in a safe and unrestricted environment.”

“It is important to have Long Beach rescheduled to continue the history and tradition for one of the series’ hallmark events, in one of the nation’s premier media markets,” noted Mark Miles, president and CEO of Penske Entertainment Corp. For the 15th consecutive season, the championship was decided in last year’s finale, held at St. Petersburg, where the 2020 campaign intended to begin. There’s no reason to suggest this can’t happen a sweet 16th time on the streets of Long Beach.