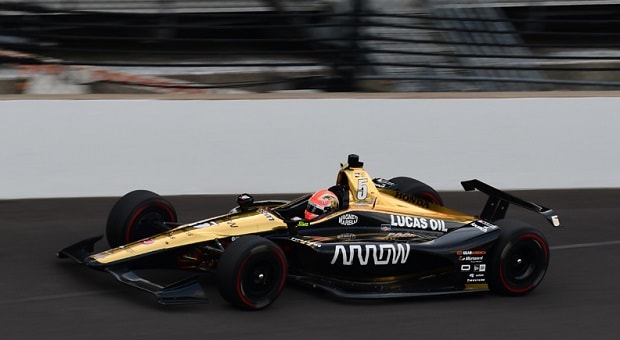 Need an incentive to give blood while in Indianapolis – or anywhere, for that matter?

Hinchcliffe, never one to stop joking, said of the donations three years ago that give him blood to replace that lost in the crash, “I had two full oil changes.” Not everyone is so lucky to have access to the right blood type when an accident or illness leaves them in need. Hinchcliffe is cognizant of the need and is doing something about it.

Partnering with IU (Indiana University) Health and the American Red Cross, Hinchcliffe is hosting #HinchliffeHundred blood drive at IMS on Monday, May 21 from noon to 6PM. That day marks a post-qualifying practice before Carb Day’s final tuneup on Friday, May 25 and is also the third anniversary of his crash (not the same date, but the identical occasion). The event is being held on Legends Row inside the Speedway’s garage area.

This blood drive marks the start of a larger initiative for Hinchcliffe: The racer intends to host several blood drives at Verizon IndyCar Series races in the future, including this year’s contest on the Iowa Speedway oval that runs July 8; he also plans another blood drive during the season finale on the Sonoma Raceway road course, set for September 16.

The blood drives are his response to donations Hinchcliffe received while in critical condition following his practice crash. Fans are strongly encouraged to sign up in advance for the blood drive by going to www.redcrossblood.org and entering the code: “HinchcliffeHundred.” The first 100 people to schedule an appointment for this event will receive a ticket and garage pass for the day.