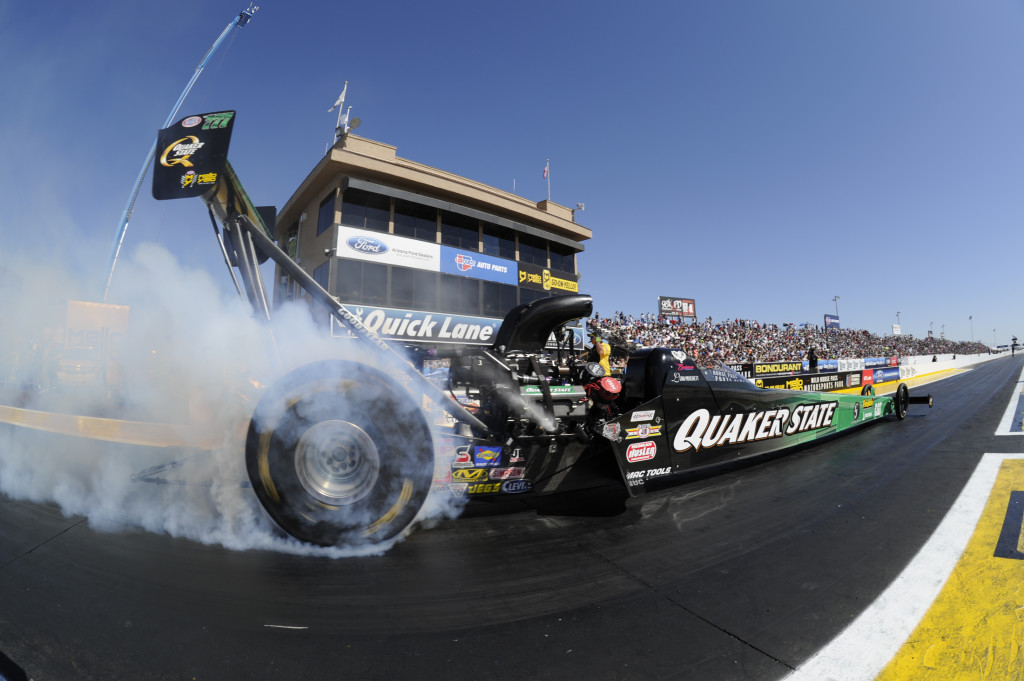 When the win light flashed on in Leah Pritchett’s lane in Phoenix at the NHRA’s last race, it had been a long, long time since a win felt so good in the sport.  The Bob Vandergriff racing team has come out the gate in 2016 swinging in the Top Fuel category and as the team was jumping up and down at the starting line with exhilaration, none was any happier than its popular crew chief, Mike Guger.

The celebration continued onward with a universal gratitude among the entire NHRA community saluting one of their own.  Guger has been around the sport of NHRA Drag Racing for most of his life, but most notably working with the master tuner, the late Dale Armstrong during his tenure at Kenny Bernstein’s Budweiser King Funny Car and Top Fuel dragster teams.

“It was awesome and real emotional to me just thinking about Dale [Armstrong] and after being so close so many times, finally able to finish it off,” said Guger.  “It’s a big deal for me.  It’s a lifetime goal.  It was real important to me.”

Being a part of the King Racing team for many years, he had plenty of opportunities to observe and soak in everything he could on the Funny Cars and Top Fuel Dragsters that he worked on with Armstrong along with all the other key personnel that Bernstein had built around him.

“What I learned from Dale was just a work ethic,” Guger said.  “How to conduct yourself; how to tune the car.  Obviously, the guy was way smarter than I am.  It was always ‘Oh let’s try that a little different’.  It’s a different era now, but he made it look easy because he was the best and that’s the key.”

The buildup to Pritchett’s magical moment in Phoenix started in 2015 as Guger led then driver, Larry Dixon, to six runner-up finishes.  As frustrating as it was seeing the other lane light up a half dozen times, Guger knew his combination was a winner and along with his co-crew chief Joe Barlam, the two put their heads together and kept the pressure on.  It was a long list of circumstances that prevented the BVR organization from heading to victory lane.

“You have to keep trying,” emphasized Guger.  “It was not just one thing.  We just couldn’t get the planets to align.  We tried several times and if you get enough shots at it, you’re going to get it eventually.  It certainly is not going to change anything except how learn to race.”

It wasn’t an easy road in Arizona to the winner’s circle for the Quaker State team.  First off, Pritchett smoked the tires first round against J.R. Todd literally driving the wheels nearly off her ride.  She benefited against a rare red light from defending Top Fuel champion, Antron Brown, advancing to the semis to outrun Clay Millican with her 4.832 pass. 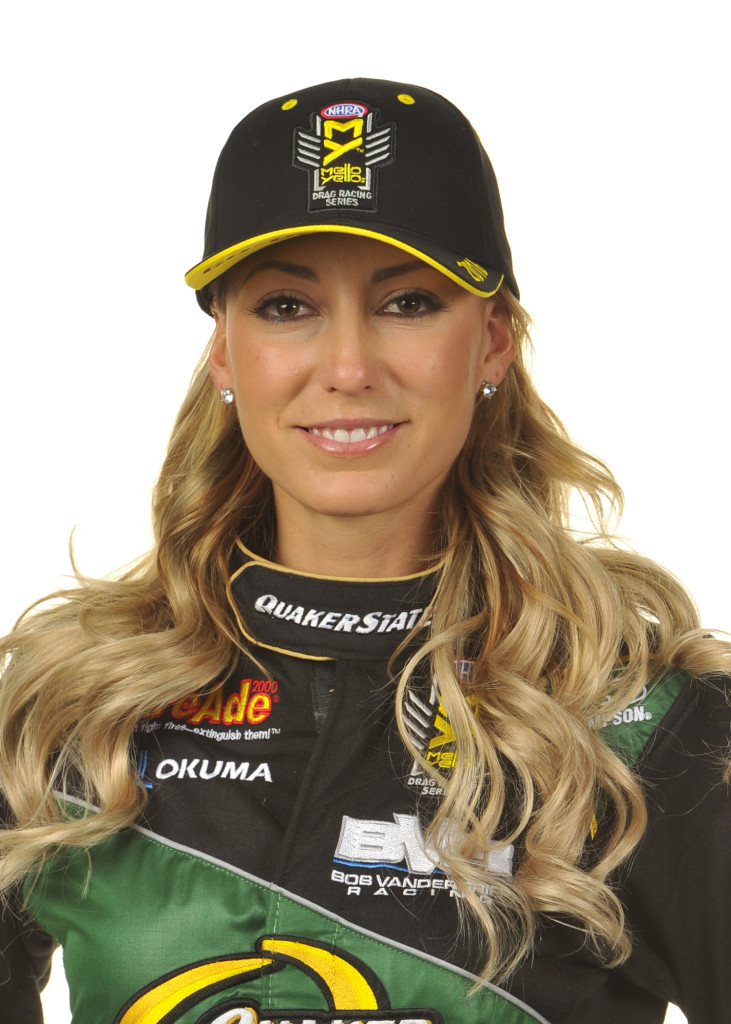 It was in the finals that Leah’s desire proved more fateful for her cause by beating Brittany Force on a hole-shot (3.775 to 3.774) in the first all-female Top Fuel final round since 1982.

“First round we smoked the tires and Leah did a great job of pedaling the car,” said Guger.  “Second round was pretty routine, just a round win, no issues.  For the semifinals, we had a deal come up in the pits.  We were warming it up and saw a bit of a fuel leak.  We shut off and took off the valve cover off where a bunch of fuel had run off and we had a brief fire.  It really wasn’t that big of a deal.  You have to be prepared for that kind of stuff.  You can’t let that defeat you.  You’ve got to ready for anything.  It’s just of those deals.”

After getting back to the pits at that moment of solace reflecting back on the day when you realize what’s just happened and it all begins to sink in, you would think the conversation would be active, but according to Guger is was just the opposite.

“Not much said, really, it was such kind of a relief for both of us,” smiled Guger.  “This had been a goal we both have had for a long time.  By the time you get back after taking all the pictures, you’re mentally exhausted.  It takes a little while for it all to soak in for at least a day or two.  The one thing I will say is the outpouring of seeing my phone blow up.  People were texting me, congratulating on Facebook, all my social media was unbelievable and it really was.  Everything was cool.  I’m loving every minute of it.”

Of course, Guger couldn’t forget the other half of the team co-led by clutch specialist, Joe Barlam.

“He’s half the team, said Guger.  “I do the motor and he does the clutch.  I try to give him as good of a motor I can every round.  He’ll ask me what’s our power element is going to be like.  He adjusts everything accordingly.  He does a great job and I don’t have to think about the clutch.  It’s all him.” 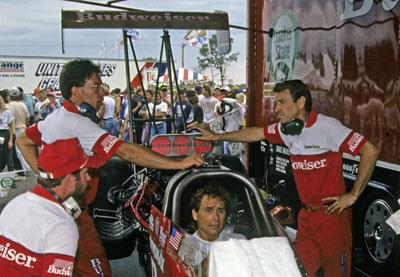 Car owner, Bob Vandergriff, is a smart man letting his team’s ebb and flow on race day be in the crew chief’s hands.  He trusts the guys running their teams and Guger appreciates letting those decisions fall on him.

“He really doesn’t say anything once we get rolling,” grinned Guger.  “He just stands backs and watches.  What’s really cool about Bob is when the win light came on he was in the middle of it and then he stepped back and watched.  He has been so supportive of me and Joe (Barlam, clutch specialist and co-crew chief) the whole way.  We’ve struggled along this year unfortunately with a few blow-ups and so forth and he never once said ‘you’ve got to get this thing worked out’.  He’s been supportive all the way, all the way.  More than you can ask for, for sure.”

This year with the Amalie Oil Gatornationals coming up, could the team see back-to-back wins.

“Our goal is to try and keep it rolling,” said Guger.  “We haven’t been very easy on parts so far this season.  We’re going to try to get that reined in a little bit.  We’ll just keep trying to plug away in Gainesville.  We’re looking for our sweet spot and we’re not quite there yet.  We’ll get it there.  If Leah keeps driving like that and we keep putting good equipment under her, it will all be good.  I have a lot of confidence in her.”

Qualifying starts on Friday night at 9 p.m. EDT and Saturday at 6:30 on FOX Sports 1 with Sunday’s live finals starting at 1 p.m.