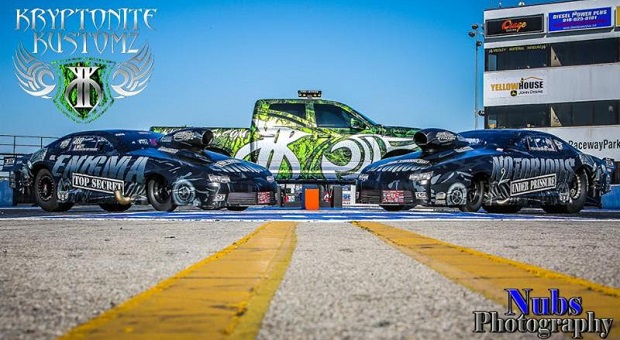 Keith Haney Racing has had one heck of a weekend! For the first time, both KHR Lucas Oil/RacingJunk.com Chevrolet Camaros (Enigma and Notorious) raced in the same event, at the Throwdown at T-Town.

“That was fun – and a lot of work,” Haney said. “Plus, we entertained our local fans. But it was an absolutely outstanding weekend for Keith Haney Racing.”

In the first and second rounds, Haney won with Notorious. After that, however, things got a tad more complicated.

Impressive – but this wasn’t the end of Notorious’ problems. Initially believing the starter was hung up, tuners Pesz and Brandon Switzer, along with the rest of the team, found that in fact the torque converter bolts had backed out. Three bolts had broken off, one had been was stripped and three could tighten. Determined to fix this issue, the crew worked right up to the final seconds (and a little past that!) before Haney’s semifinal matchup with Jonas Aleshire.

“It took longer than what we had anticipated,” Haney said. “They pulled over and waited. At the end of the day, all they cared about was racing. They could’ve taken the Tree, taken the round win and gone on to the finals. But they were stand-up guys and believe in the Mid-West Pro Mod Series, and we had well over 35,000 fans over the two days, and these guys wanted to race. That’s all they cared about. I’ve got a lot of respect for that team waiting on us. A lot of the time they were working on the car, I was inside, fully buckled up with my helmet on. They waited 15 minutes longer than they should’ve. Needless to say, I was pretty nervous.”

When Haney, at last, fired up the car for a burnout, he heard something amiss. There was a lot of clanking coming from within the workings of the car. He suspected the engine would end up “going to the moon” immediately upon launching, but Notorious took to the track without a problem. Of course before long, as the lockup came in, every bolt from the torque converter broke. Sparks flew everywhere as Haney slowed down and veered left, working to regain control of his vehicle. He lost, but was confident that the car was strong.

“First Mid-West Pro Mod Series race, we got to the semis, and the car was perfect,” Haney said. “We had the fastest car on the property. Had that incident not happened, we would’ve kicked their asses. They all know it.”

Enigma also put on an impressive turn of speed, but luck was not with Pesz, the driver, in his matchup with Mark Mickie. Pesz had a decent .038-second reaction time, but Mickie managed a .001 light, which allowed him to beat Pesz’s slightly quicker pass. Pesz’s run came to 3.960 seconds at 191.38 mph, but Mickie triumphed with a pass of 3.963 seconds at 205.85 mph.

Pesz, Switzer and the whole KHR team have a lot of which to be proud over the weekend – preparing and racing two different cars in two different classes is anything but easy, and they pulled it off well.

“Brandon Switzer did a remarkable job tuning with Brandon Pesz,” Haney said. “They had a good weekend. I couldn’t believe all the guys, too. It was an amazing effort by my crew. We had great fans, and all our sponsors were just ecstatic. The show went off great, and we were done. A great outing for Keith Haney Racing.”

Haney will head to the next Mid-West Pro Mod Series race, at Gateway Motorsports Park on June 30-July 1. He currently is third in the points standings.