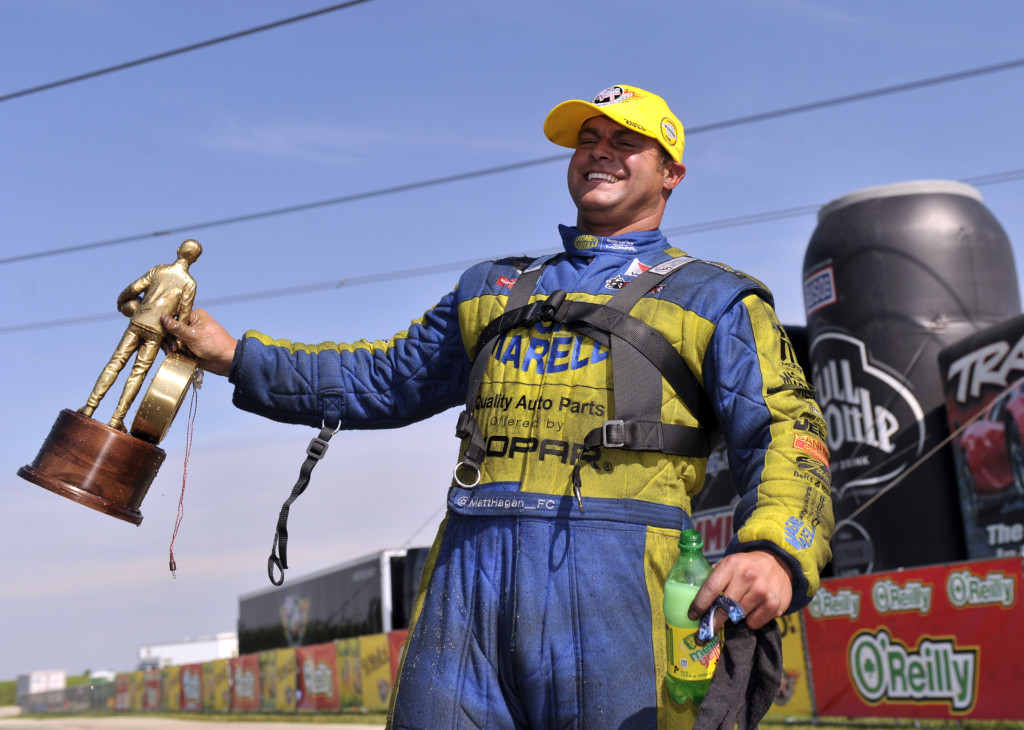 Matt Hagan is the type of Funny Car racer that could feel he has had a complete motorsports career in just a short three years.

He’s lived the highest of highs in the drag racing world–winning the 2011 NHRA Mello Yello Funny Car championship after rebounding from a crushing loss at Pomona the year before to legend John Force.

Add to his story that 2012 was a year of rebuilding after adding a new crew chief, Dickie Venables, to right his ship at Don Schumacher Racing after missing the NHRA Countdown.   In this quick span of time, Hagan finds himself back in a familiar situation.

With only two NHRA drag racing events remaining on the calendar, Hagan now finds himself in the unenviable position of second place trailing Force by 65 points.

What makes that so hard to deal with is simply that Hagan took over the Funny Car points lead at Raceway Park’s Englishtown on June 2 and rode it as the leader through the start of the Countdown only to let it slip away in Pennsylvania at Maple Grove Raceway on October 6.

That leaves only leaves the Toyota Nationals at Las Vegas and the Auto Club Finals at Pomona in the six race NHRA Countdown to the Championship format  or only eight rounds of racing, for Hagan to earn at least 66 more points than Force in that short duration.

“There’s no room for error,” said Hagan, the driver of the Rocky Boots/Magneti Marelli/Mopar Dodge Funny Car.  “We’ve got to have two good races, he’s got to have one bad, and it’s got to play out that way.  It did for me in 2010.  I came out of this points lead in Reading 65 points ahead just like John did just now, and he came back and spanked me again, man.  It’s very doable, it’s possible.  You have to be confident.  Confident, cocky, call it whatever you want to be, you have to be driven to win. I think I read a sports book the other day that said if you’re not confident, you find a way to lose, and we’re not going to find any ways to lose, we’re going to find a way to win out here.”

Hagan has reach eight final rounds with four event wins this season and dominated until now.

After going through a championship season, he knows what it will take from him and compares this season differently than his other two previous attempts to take the title.

“I think it’s a lot more stress free,” said Hagan, the nine-time National event winner.  “2011 it was just so unpredictable.  I’m with a different group of guys now.  They’re a little bit, I would say, more focused.  Not that our other group wasn’t, but after you’ve been there before, the hardest part is winning your first one, I believe, not that I’ve got a second one to talk about.  It’s just so hard to win that first one.  Ask Ron Capps how hard it is.  It’s so tough, and after you’ve been through that pressure and you understand kind of how to internalize that and use it as a positive, I think that you just grow from there.  Maybe that’s why John has got so many.  He knows how to do it; you know what I mean?  We’re racing with the best out there, and it’s not to say that there’s a couple boys back there right behind us that can’t sneak up here and do this thing, too, but I really think it’s turned into a two horse race here, and we just have to focus on what our car can do and not really who’s beside us, as hard as that is to do with a 15-time champ out there. “

That philosophy gives Hagan the reality of knowing that only he can set his destiny.  The Force team is gunning for him and wants to eliminate him from contention and Hagan is taking that drag racing maturity right in stride.

“We can’t control how he qualifies, we can’t control who he runs, we can’t control how many rounds he goes,” said Hagan.  “We’ve just got to go out there and try to go four rounds on Sunday and turn four win lights on and do it two more races.  I believe we can do it.  I know that’s a steep hill to climb, but I’ve never won back to back races, and I sure would like to in these last two events.”

John Force has literally been burning up the track.  In the six-race NHRA Countdown, the Yorba Linda, Calif., driver after the first four races has reach the finals three times, winning two (St. Louis and Reading, Pa.)  Hagan has only one final round in this period at the zMax Dragway in Charlotte.

“Well, it’s tough,” said Hagan.  “The cards are stacked against us, but it’ll make it that much more special when we win.  Definitely you look at a guy like that and you look at your career, and a lot of guys out here would just love to be in my position to do battle with this guy.  He’s a 15-time world champion, and I’m working on my second championship, and hopefully it comes together for us in these next two races.

“But if it doesn’t, we’ll get back together; we’ll work hard and make it happen the next year.   I’m still focused on today.  John is a legend, but I think some of that stuff gets in people’s heads.  The biggest thing that we have to think about is just not who’s beside me because that’s out of my control.  A lot of it is just what I can control in the race car.  It’s leave on time, keep it in the groove and turn the win light on.  When you get to thinking about all that other stuff that’s out of your control, there are so many variables anyway.   I think it really goes and messes with people.  For me, it’s put the blinders on and just kind of dig deep.  The guy, like I said, he’s drag racing, man, and I have nothing but respect for him.  He’s always been super kind to me, but it doesn’t mean that I don’t want to beat him anymore.  Nobody has been giving me anything out here all year long, and we’re not going to give up any rounds to anybody else.”

Although not yet the household name as Force, challenging the 15-time champ could portray Hagan as the villain in this flopper drama, especially when you’re trying to beat fan favorite Force. Good-guy, Hagan sometimes feels the world maybe rooting against him, but sheepishly grins at the opportunity.

“Well, if you read Facebook, there ain’t no Matt Hagan fans out there,” joked Hagan.  “That drives you.  People either love you or they hate you.  I don’t want anything in between.  That’s just racing and the fan base and that kind of stuff.  Yeah, I feel like we’ve got the cards stacked against us, but if we can come out here and pull this thing off, it’ll make everything that much sweeter for us.  Yeah, it’s tough.   I mean, but John Force has been out here 30 some years doing this.  He’s built a humongous fan base.  This is my fifth season out here doing this.  I don’t expect everybody to cheer for me.  It’s one of those things where I’m not asking you to.  I just want to go out there and race my race car and hopefully turn on four win lights on Sunday.  I don’t know, I mean, you can’t help but like the guy and I’m racing him.  He’s always been very kind to me.  He’s a stand up guy.  He’s the same off camera as he is on camera, and I mean, I don’t know, just a good all-around guy.  So yeah, I understand why people like him.  But when it comes to racing, I want to beat him so bad I can’t stand it.  I think about it at night, I think about it in the morning, I think about it when we’re out here doing this deal.  And I try not to think about it because sometimes I feel like it consumes me. That’s why I’ve got to get out here to the farm and do some different things to occupy my mind and spend some time with my family. But it is what it is.  That’s why we race.  We have a passion for it.” 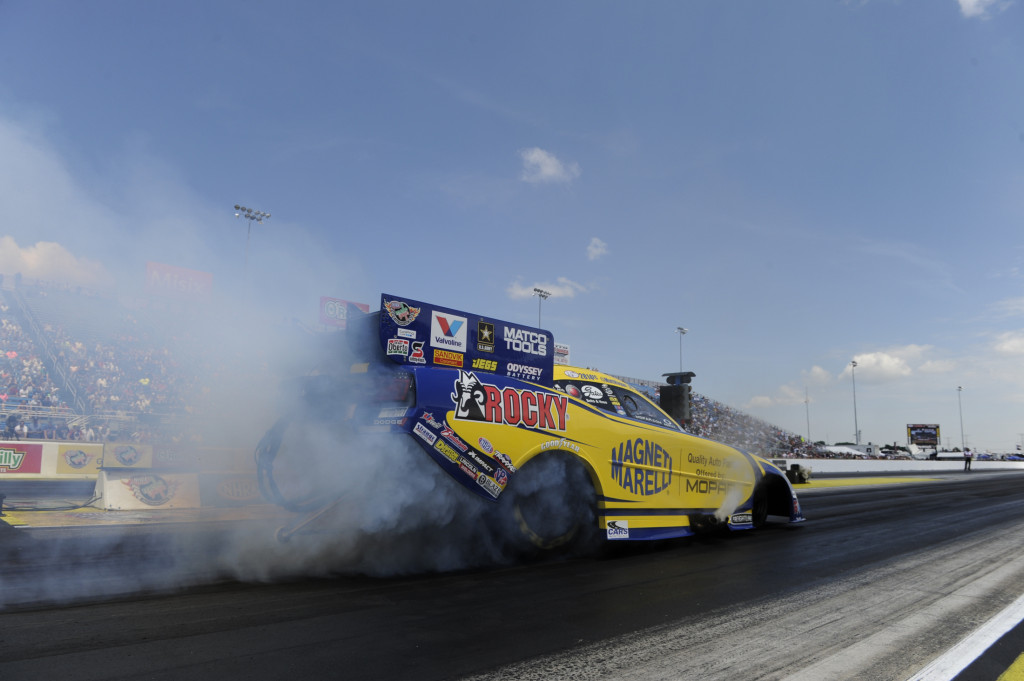