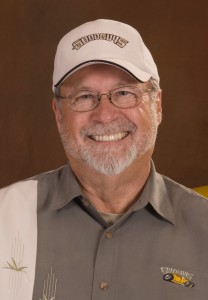 Meadors founded Goodguys in 1983 in Northern California, and the organization launched a series of hot rod and custom car events in 1987, to become one of the most well-known and well-respected automotive event production companies.

Goodguys Rod & Custom Association has a worldwide membership of over 70,000 people, promotes 21 hot rod and custom car events, and publishes the Goodguys Gazette.

Gary Meadors grew up in Dinuba, CA in the Central Valley where he discovered a love of cars, and customizing them to his needs and interests, including the ’32 Ford hi-boy which was drawn by Thom Taylor and has served as the iconic centerpiece for the Goodguys logo since ’87.

Meadors moved from his job as a traveling salesman to an auto show promoter following the success of a “Street Rod Mini Nationals’ at the Lodi Grape Festival Grounds in 1973. He worked as a regional event director for the NSRA, creating the Western Nationals in Merced, CA which would eventually become the Goodguys West Coast Nationals at the Pleasanton Fairgrounds when Meadors and his wife Marilyn launched Goodguys.

He was also instrumental in developing and encouraging vintage drag racing events, including a resurrection of Bakersfield’s March Meet, now run by the Auto Club. He entered Bonneville’s 200mph in 1994 driving the Dozier & Hegarty Chrysler to a 223mph top speed.

Meadors, and his organization, have had a profound effect on the hot rod enthusiast community, not only with the spread of the shows across the country, but with the addition of AutoCross, the encouragement of young builders and enthusiasts, and the Trendsetter award presented at SEMA to recognize young builders.

In 2009, Gary and Marilyn stepped down from the day to day operations of the organization, turning them over to their youngest son, Marc, allowing them to travel and enjoy their vehicles on the open road.

From the obituary provided by the Goodguys Rod & Custom Association:

“All told, Gary’s life was enriched with deep personal relationships and hot rodding milestones. He is enshrined in the Street Rod Market Alliance Hall of Fame, Hot Rod Industry Alliance (HRIA) Hall of Fame, and is a recipient of both STREET RODDER Magazine and the HRIA’s “Lifetime Achievement” awards. In 2014 he received the International Show Car Association’s “Legends of Hot Rodding” award.

But the ultimate award for Gary Meadors, was being able to share his love and passion of cool cars with others and bring people together. It’s truly what made his tires turn.

He is survived by his wife Marilyn, brother Craig, sons Marc and Marty, grandchildren Breann, Grant, Grace, Reece and Rory.”

Our thoughts go out to all of the Goodguys family and community as they deal with this loss.