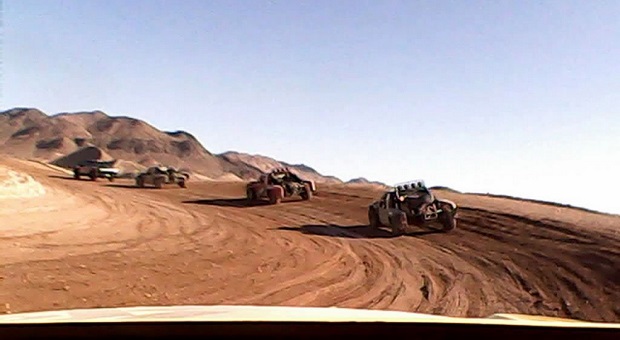 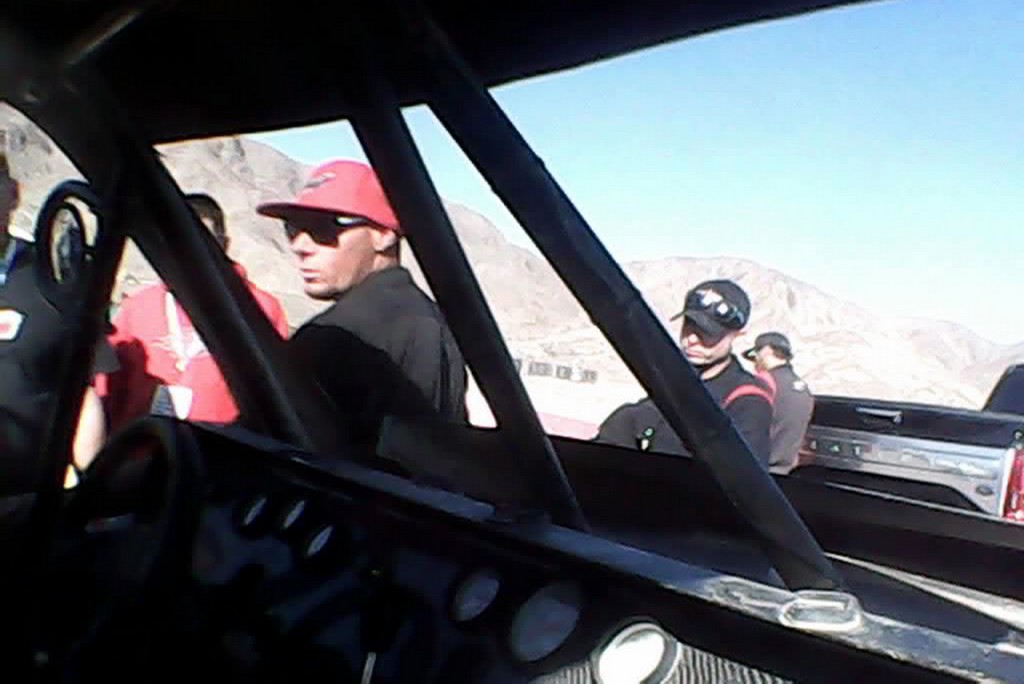 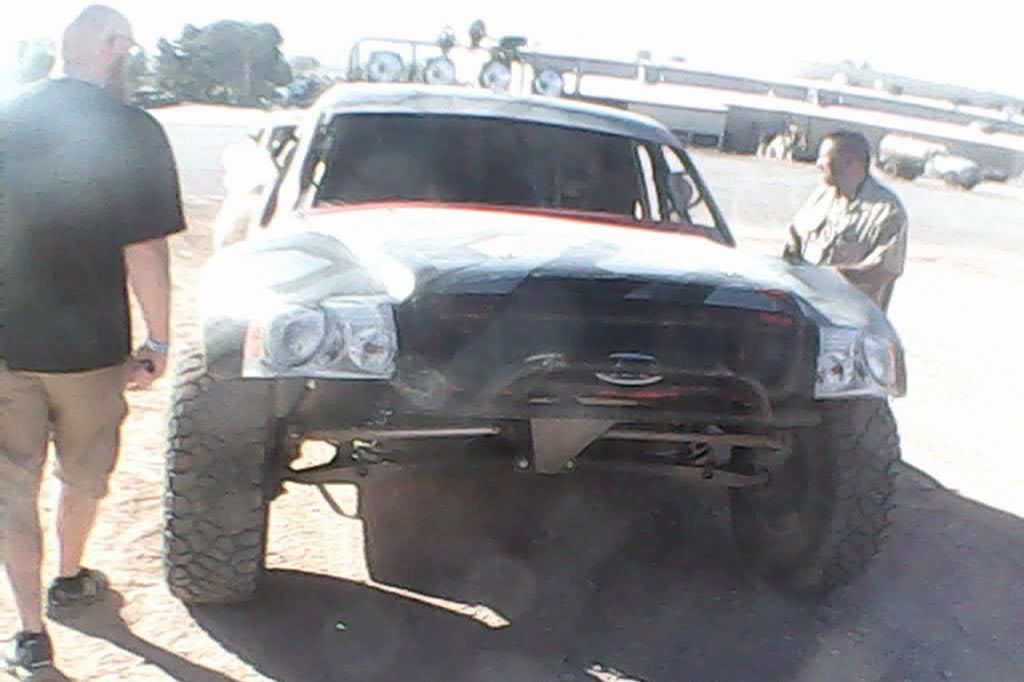 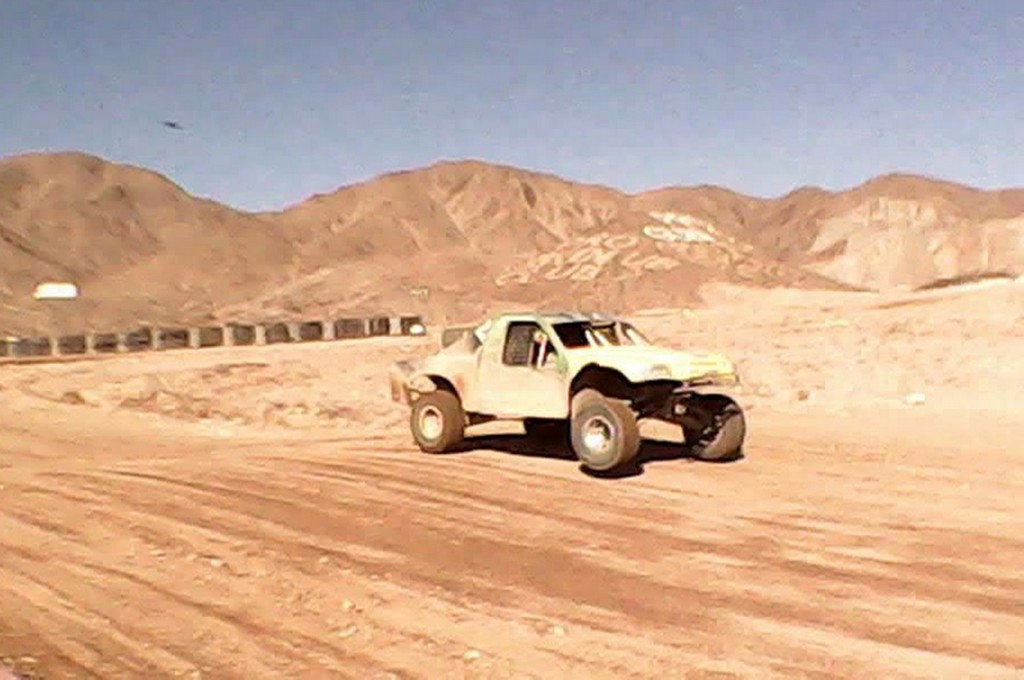 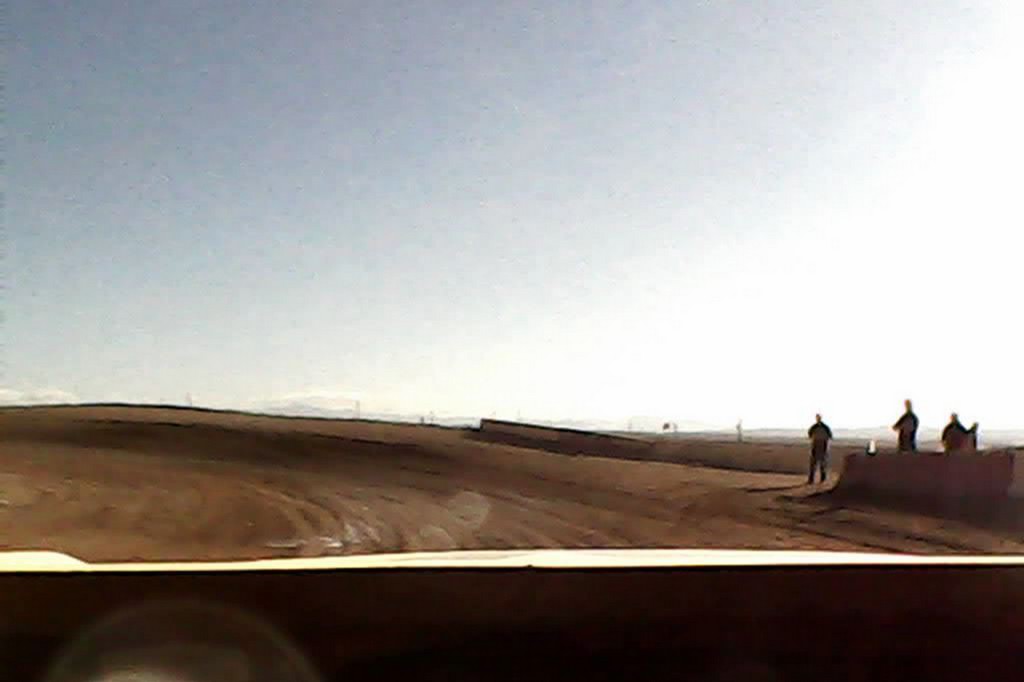 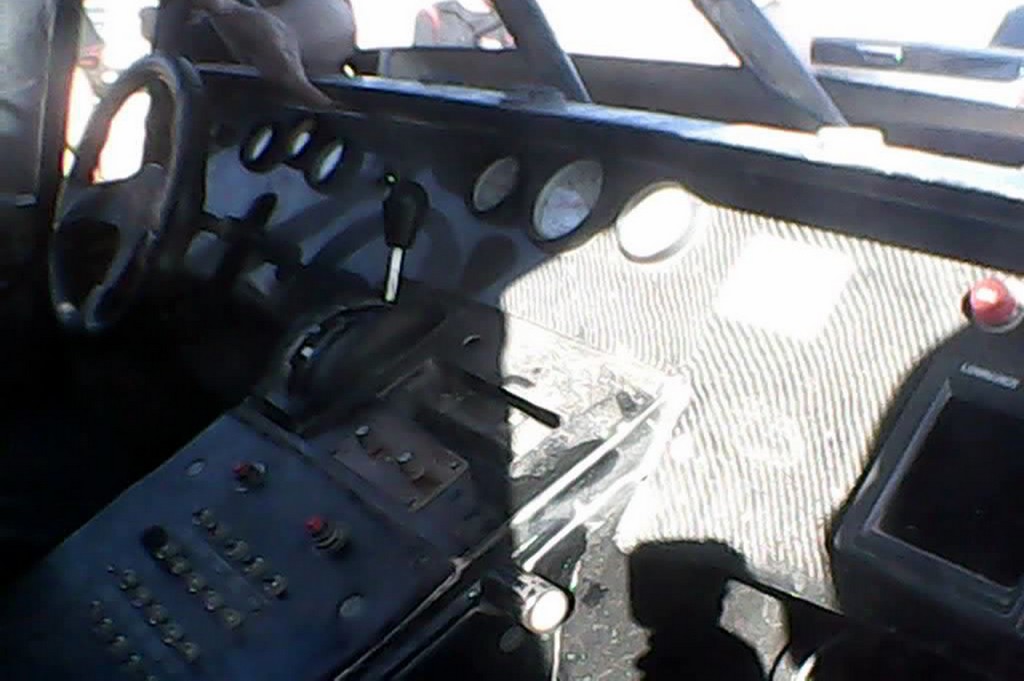 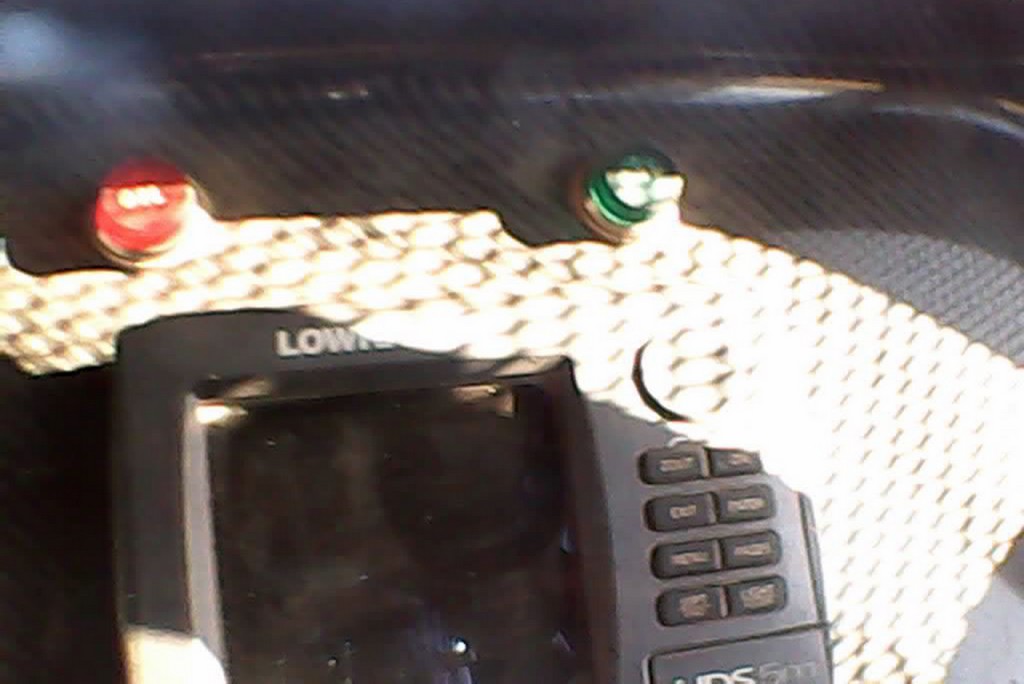 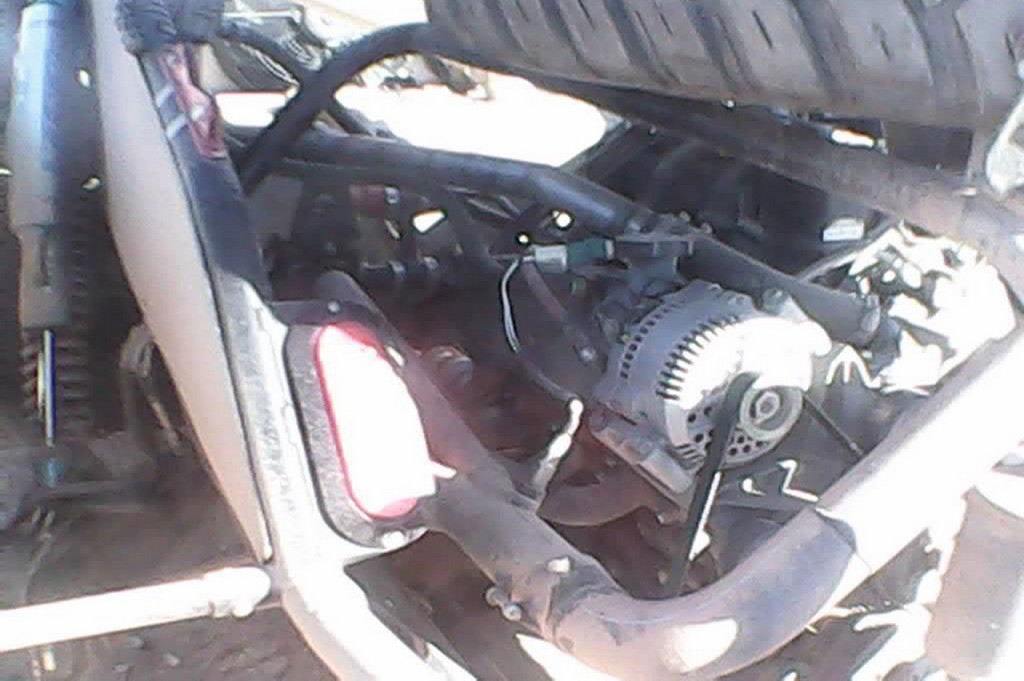 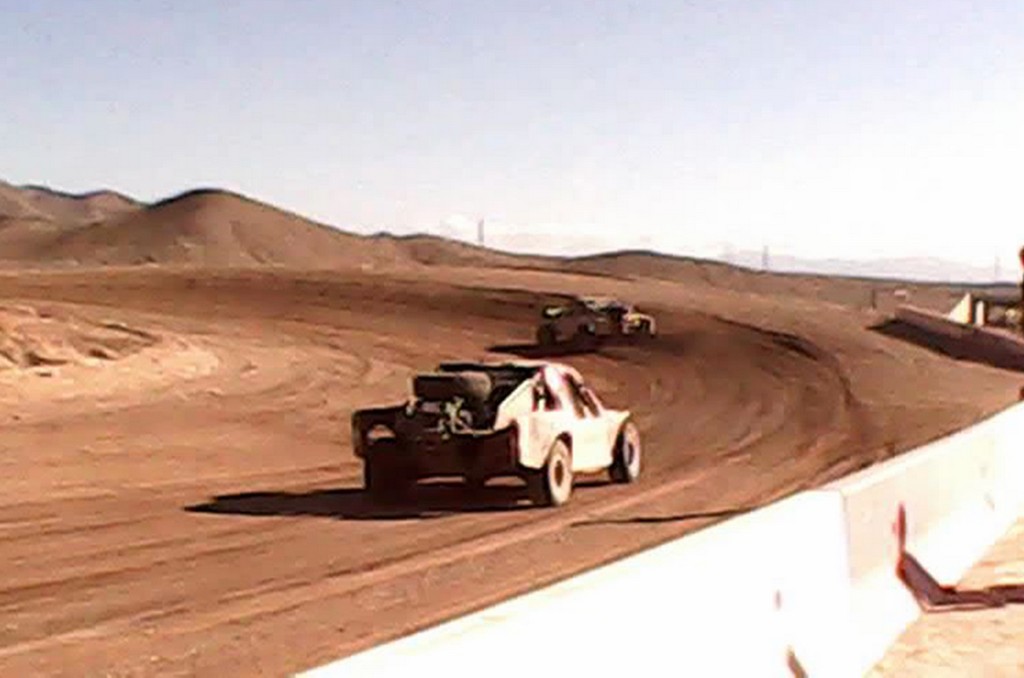 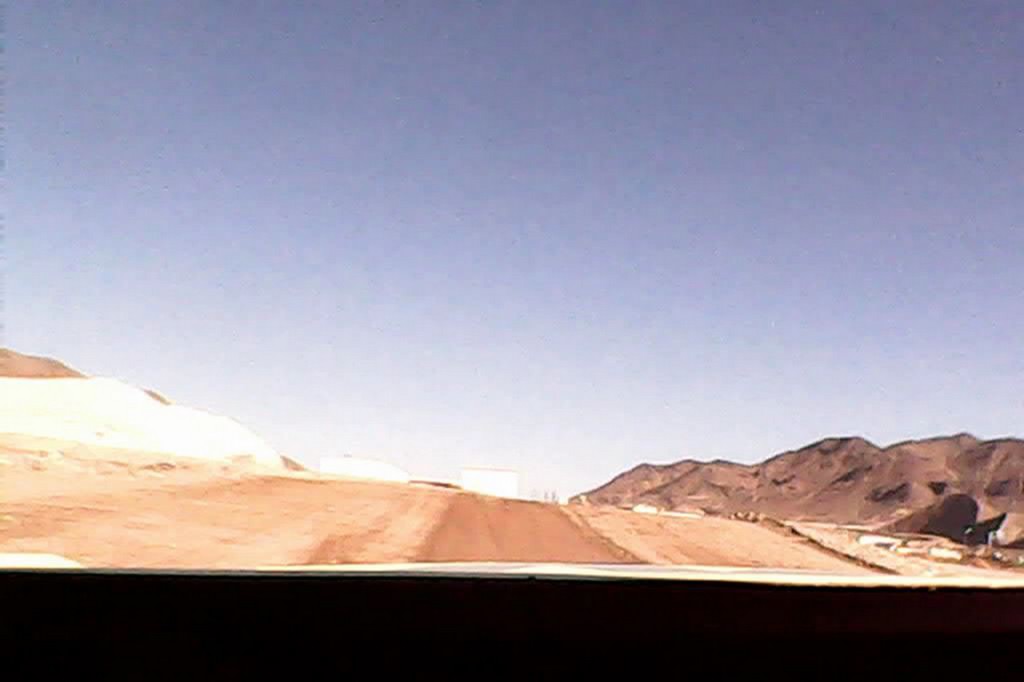 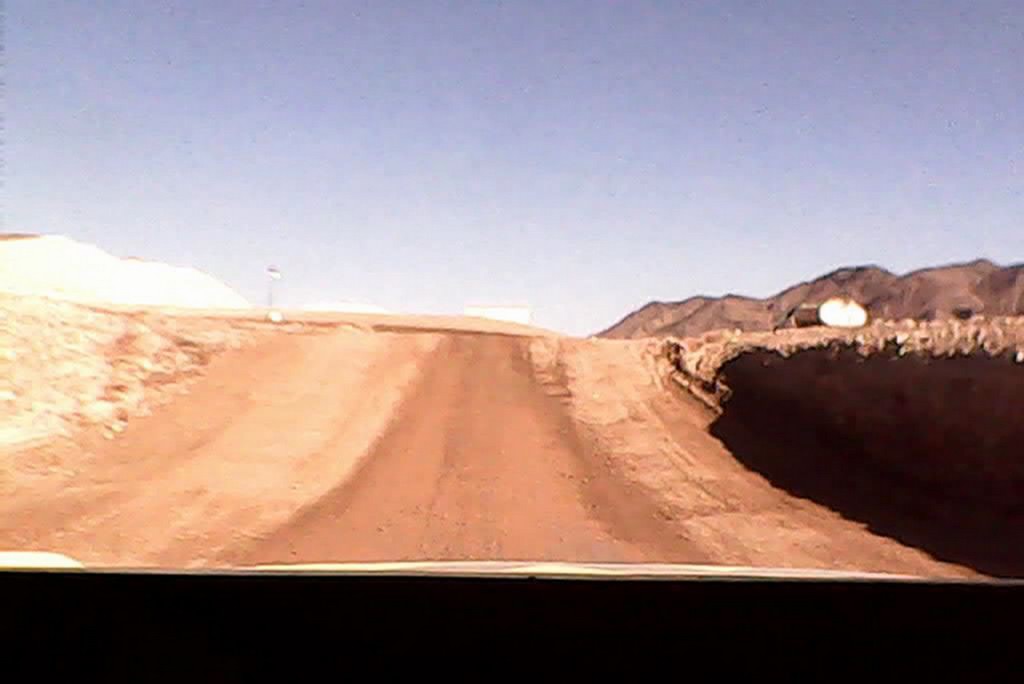 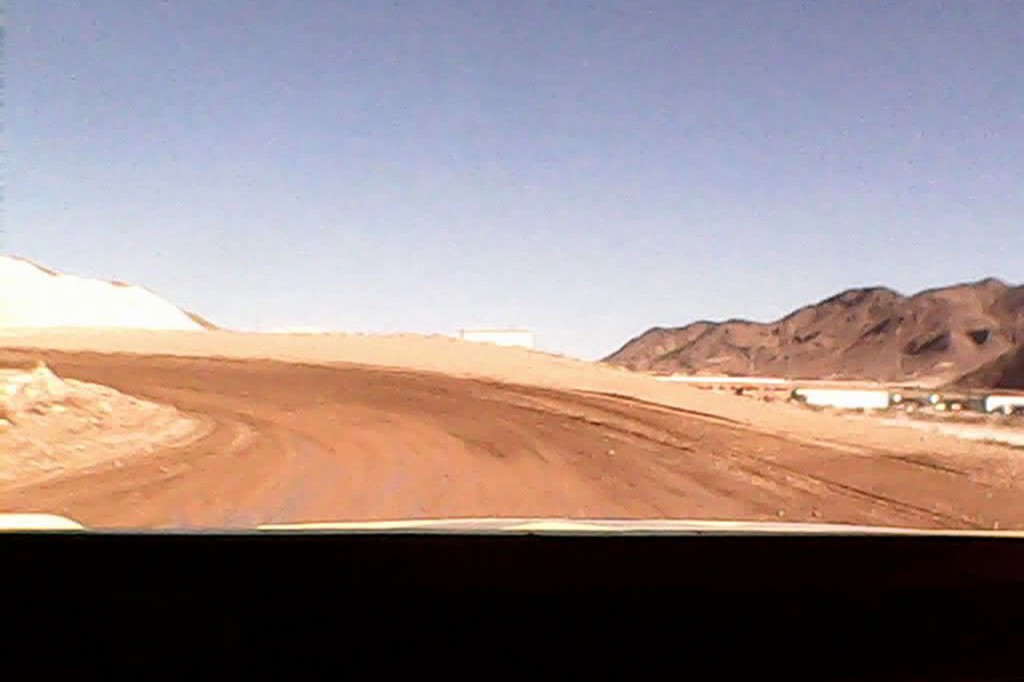 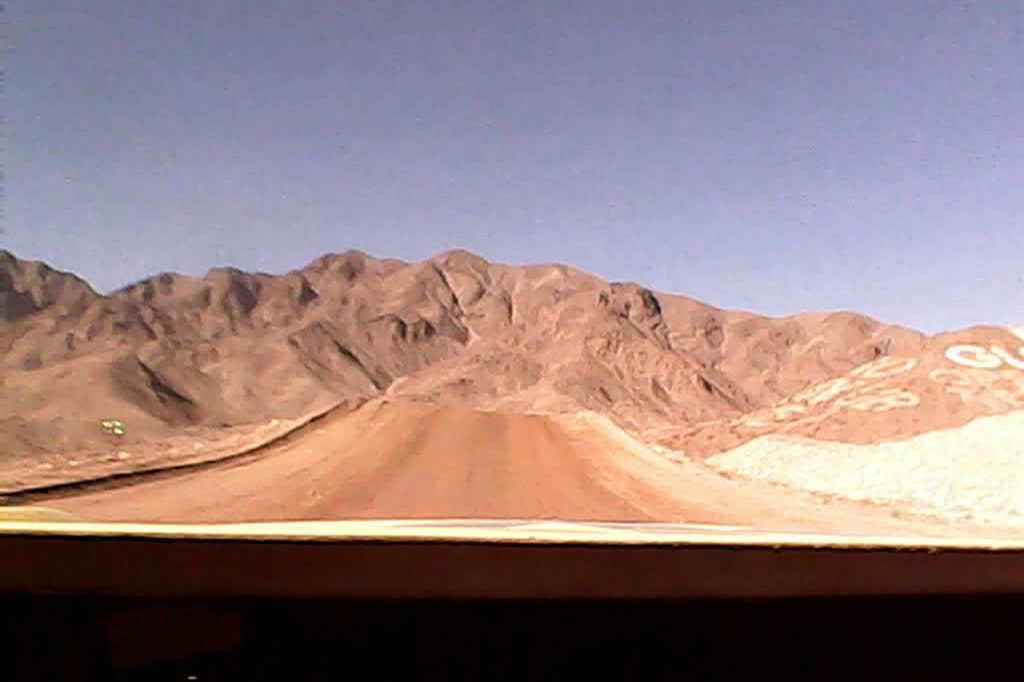 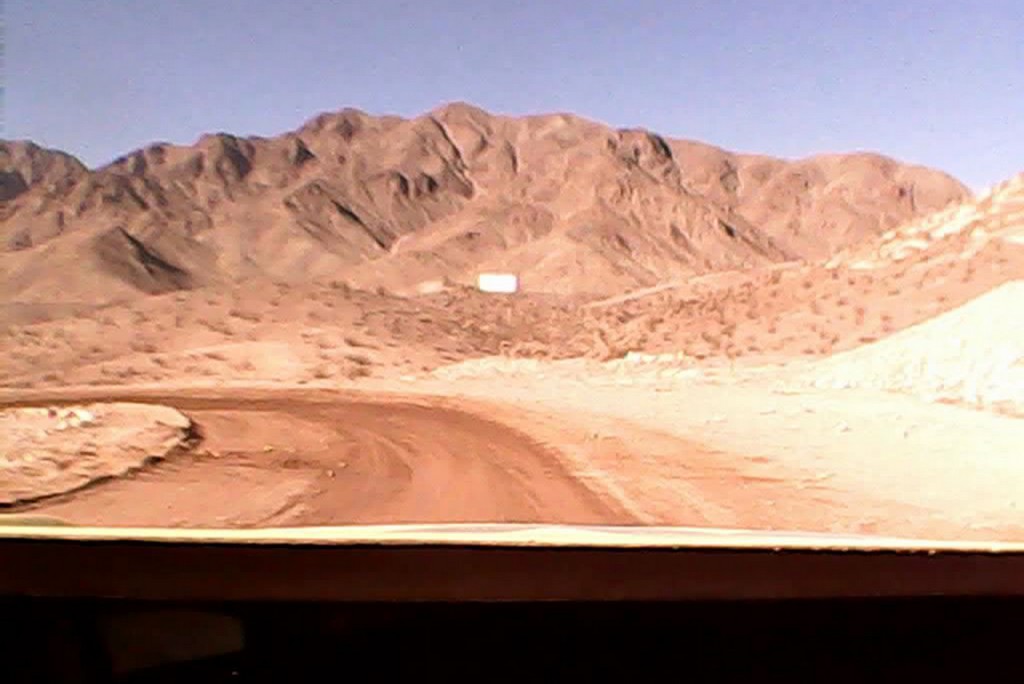 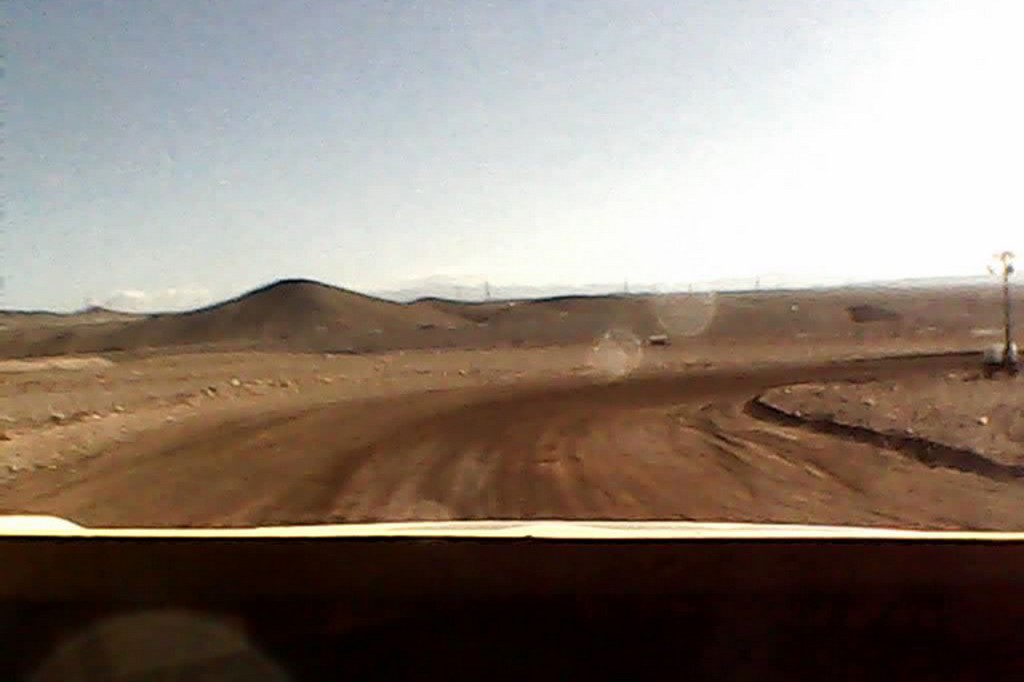 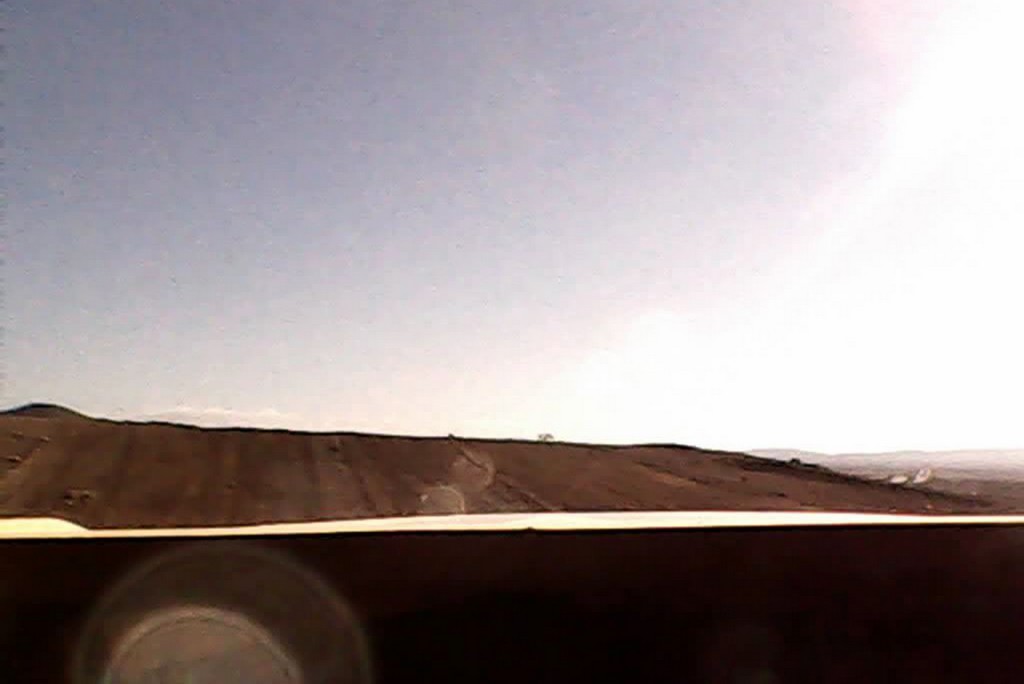 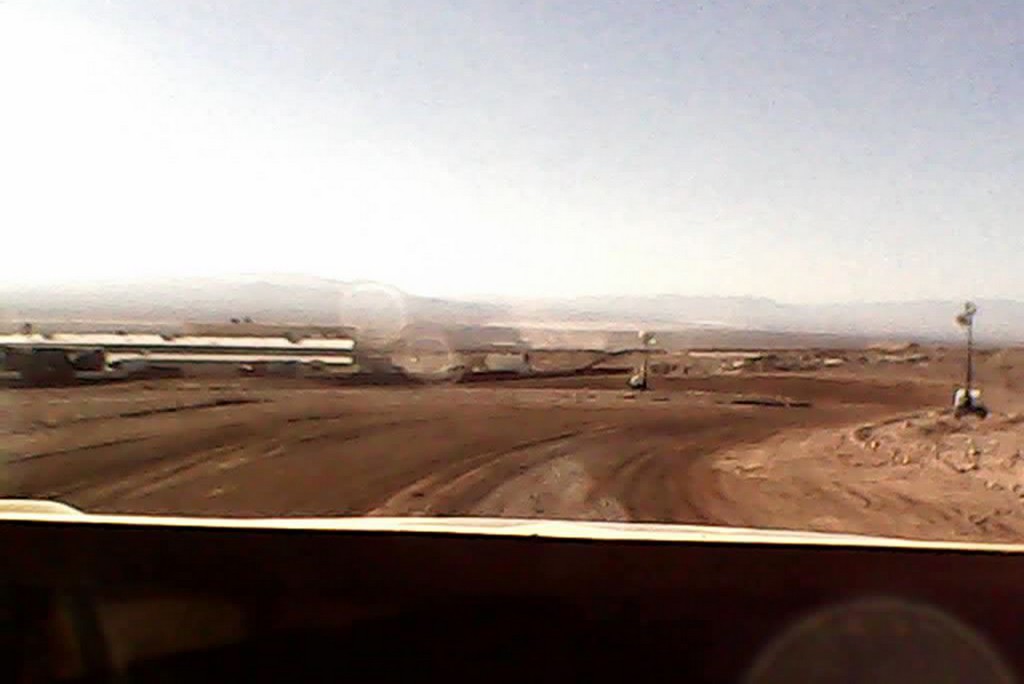 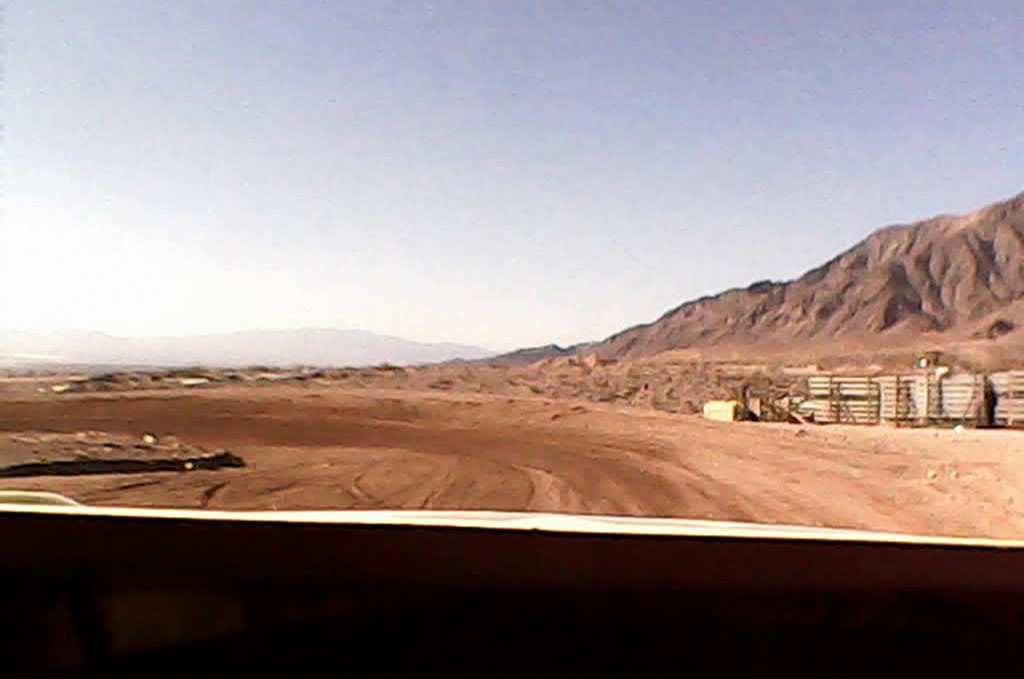 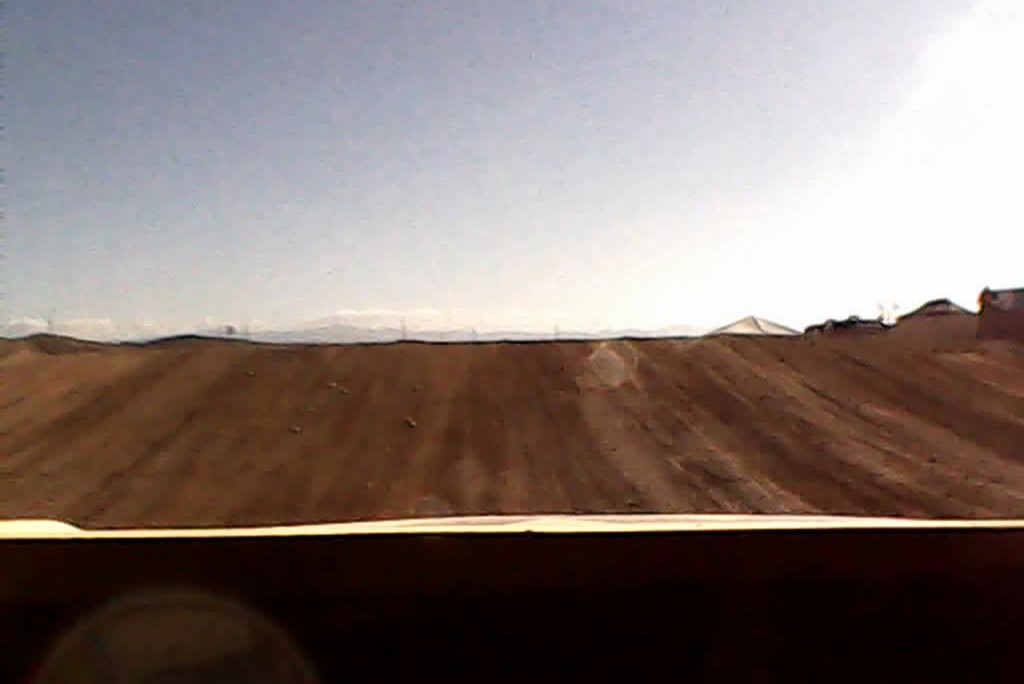 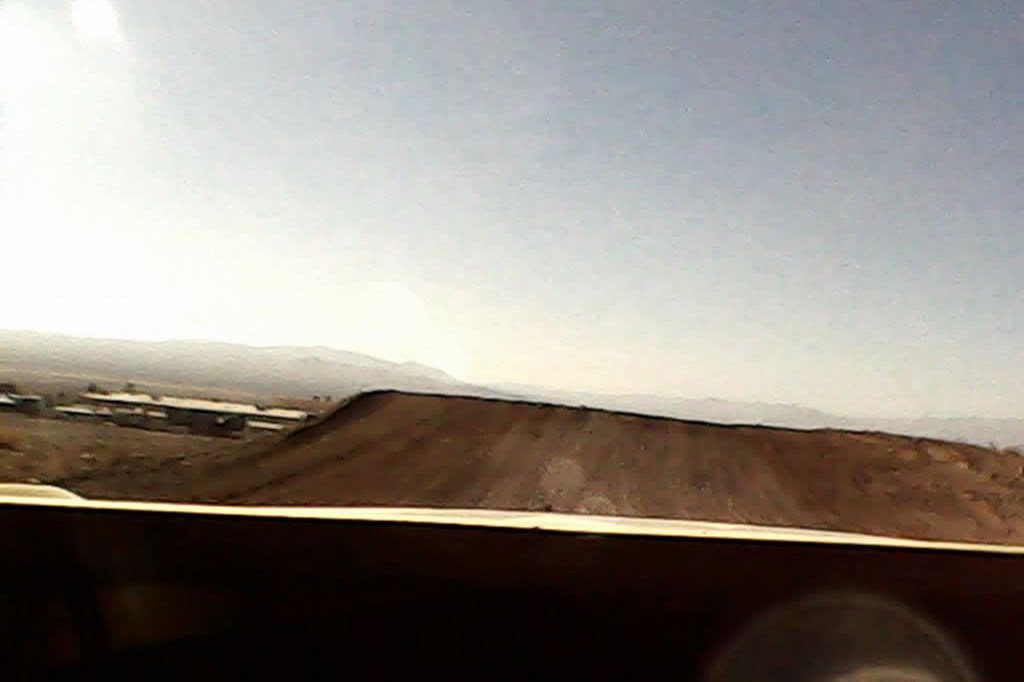 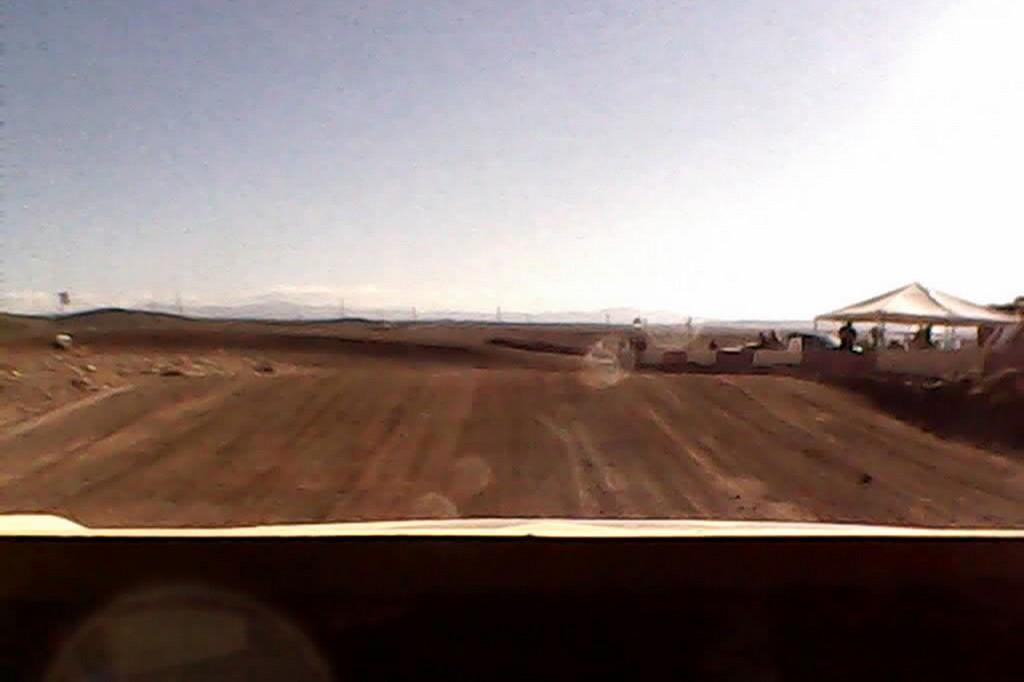 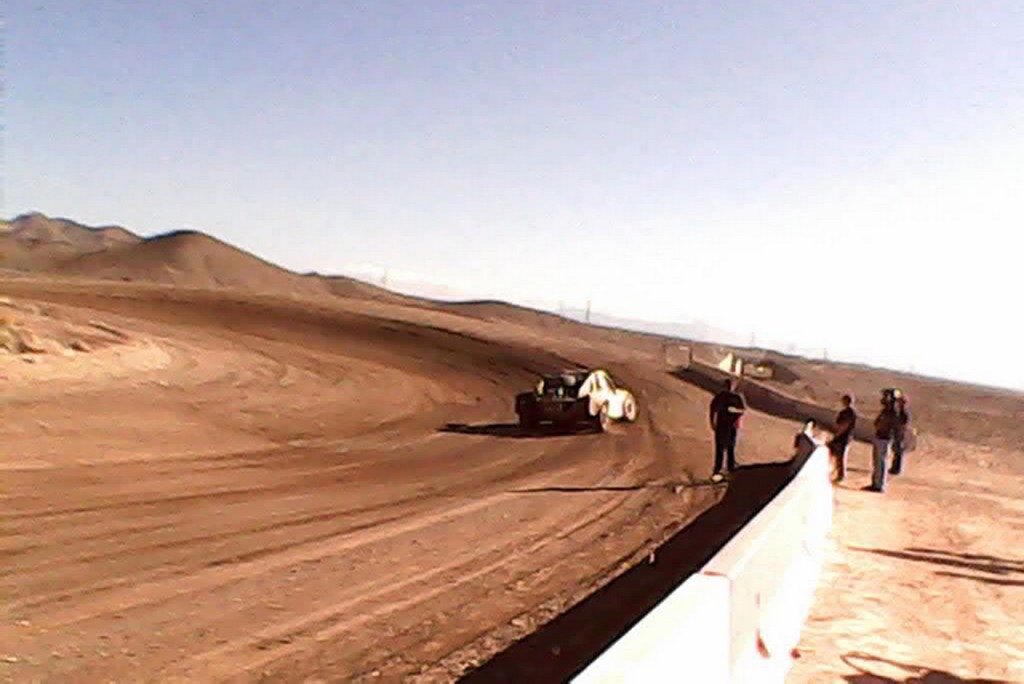 All images and video by Enilda Aguilar

One day recently I was invited to test out the new Ford Raptor for RacingJunk by taking a few laps on a dirt short course “stadium.” I jumped on the opportunity, of course, and took my Faux Pro camera along with me to record the experience for you.
This photo shows our lead driving instructor for the day.

The event was held at the Adrenaline/VORE (Vegas Off Road Experience compound outside Las Vegas, Nevada and started at nine in the morning with a 20 minute introduction to the trucks and safety briefing. My thinking on this was, “Hey, I’ve been driving cars and pickups since the early Eighties; why do I need a class on how to handle a Ford pickup, albeit a really radical off road one?
Well, our class started off with a video that showed the trucks we’d be driving that day, and one thing stood out as very different from anything I’ve ever driven before (and I’ve driven quite a few things in my lifetime): These trucks, while they may vaguely resemble the Ford Raptor you can buy at the local dealership, were very different from those “dealership trucks.”
These things have nothing under the fiberglass hood in the front except suspension components. The engine is in the rear of the truck. This means they do handle quite a bit differently than anything else I’ve ever driven in my lifetime. We were told, “These trucks don’t do power slides. Don’t even try. They also don’t do ‘slide turns’ where you accelerate into the turn and use the engine’s torque to help turn the rear end. You WILL get in trouble out there if you try either of these moves. The trucks don’t like those maneuvers because the engine and transmission are in the rear.”
This photo shows Turn 1 after the Front Stretch.

The next part of the orientation video/safety class was a short video shot from a drone of the track, both with and without the trucks we’d be driving going around the course with the instructors at the wheel. The voiceover on the video told us how to run the various jumps and turns on the track so as to not wreck ourselves or anyone else. Once this was done, we headed out to the track and got fitted for our helmets.
I passed Switchology 101. Below this switch panel is the radio panel with more switches that we learned how to use.

As I mentioned before, although these trucks vaguely resembled the awesome Ford Raptors on display at your local Ford dealer, they were not the same trucks. The first and most obvious difference is the fiberglass body. The next thing that jumps out at you is the rear-mounted spare tire and window net.
The instructor has you gather around both sides of one of the trucks (driver and passenger windows) and goes through the truck’s “switchology.” Which one of the switches you see is the master power switch? Which one turns on the cooling fans for the electronics and which one turns on the forced air fans for the helmets? The starter?
There were five switches we had to know the function of before he moved on to the next portion of the familiarization, which was how to get into and out of the five point safety harnesses - which belt went into the buckle first (left leg, anti-submarine, right leg, right shoulder, close the latch-just like the dozens of other safety harnesses I’ve used over the years) and how to release the belt’s latch. Although we were told a few times that if we wrecked, we were to stay put and wait for one of the safety drew to come get us, we also had to learn how to latch and release the window nets.
Once we learned how to operate the safety equipment, we were allowed to jump in and strap in. Make sure you loosen the belts before you attempt to buckle them up, as there’s no give in them like in your car or even a “stock” Raptor. Over the radio, we were given the command to start our engines and once we all did that, the “head instructor” jumped into his own Ford Crew Cab truck and led us onto the track to familiarize us with the track.
This is the first “jump” on the track right after Turn 1. Its purpose is to mainly give you a little more downward momentum for the wall coming up.

Whether you’re running autocross or racing off road in stadium trucks, the most important thing is to get to know the braking and acceleration zones on the track in question. So, once we had our helmets and knew the switches, off we went for the track familiarization lap. Our instructor led us onto the track right at the first turn, which has a short chute leading to a drop off and a wall ramp.
This jump gives you some good air if you hammer the throttle.

Once you settle after coming back to Earth after climbing the wall, there’s a short braking zone leading into a banked hard left turn. Brake lightly before the turn and accelerate through the apex and out of the turn. This led into a couple of light jumps and then into the 40 foot tabletop jump they call “Gravity.” Hit this jump straight-on and in the center, so you can carry as much speed as possible into the 90 degree soft-packed and banked left turn.
Turn 2 has to be hit near the center so you can be at or near full throttle on exit, so you can hit the first small camelback jump on the backstretch.Out of the hard left, you’ve got a short chute leading to a small jump. After the jump you need to set up for a flat hard right turn. Set yourself up in the middle of the track after that right turn as you’re going to hit another small jump, shortly after which is a small mild chicane (something of an S-turn). Out of the chicane, you need to set up for another hard left with mild banking, which allows you to carry a little speed through the corner.
"Gravity" is a 40 foot tabletop jump. If you’re at full throttle at the apex, you’re getting really good air.

Once you clear the low-banked hard left turn, you’re on the front stretch, which is broken up by two short camel back jumps. They aren’t much, but if you’ve carried good speed through the previous left turn, you can get some air on them. That’s it. Going at a good clip, the short stadium-style course takes about two to three minutes to traverse.
Hit Turn 3 middle to high so you can carry more speed through it and get into the throttle sooner on exit.

Every time we approached one of the jumps during our familiarization lap, our instructor repeated one mantra: “Let off the throttle as you reach the apex of the ramp, otherwise you will damage something. It might be a differential or an axle, or it might be the transfer case. Worst case scenario: You break all of the above.”
“Oh, and remember guys,” the instructor continued, “the release you signed inside the office before the video said you accepted liability up to $3,000 for anything you break, and since these trucks are valued at about $300,000, trust me: If you break just about anything, you’ll be paying $3,000, so be careful and again, let off the throttle just before you hit the apex of the ramps. Don’t be in the throttle with the trucks in the air. Please. We don’t want to charge you $3,000 for breaking something, but we will.”
The fourth jump is a mild one that sets you up for a flat sweeping right turn that is very misleading when you look at it.

There were five trucks lined up for us to choose from as we got to the track, so once I got my helmet fitted and the switchology class was through, I headed out to the last one line and started to get into the driver’s seat. I was told to head to next one up in line and to get into the passenger seat since my “co-driver” was already strapped in.
The chicane doesn’t look like much, but you can’t carry much speed through it and you’ve got to be careful with throttle application or you won’t exit it to hit the next turn correctly.

Our instructor spaced us out in about 30 second intervals, since as amateurs, we really didn’t know how to safely pass on this type of track with this type of truck at speed. Remember, these aren’t “stock Ford Raptors” and this wasn’t the freeway - it was a dirt track course, and we were driving race-prepped off road trucks.
Here we are entering the final turn before the frontstretch. This is a somewhat wide left turn with low banking. This one almost bit me on my first full power hot lap.

The guy who led the procession must have had quite a bit of experience in this type of truck, because he was less than 20 seconds behind us on his “let me get used to this truck” lap before we were given the go ahead to take off.
This jump needs to be hit straight on and centered.

Once my co-driver finished his four laps, which seemed to me to take forever, and everyone was stopped and parked, we switched positions. I had decided beforehand that I wasn’t going to baby it around the track for the first lap like my co-driver did, but I wasn’t going to try and set any sort of track records, either. I wanted a lap to feel what the truck and track felt like together to my head, hands, and most importantly, my butt in the seat.
Hit the final jump full throttle, but be sure to lift just as you’re reaching the apex.

Once that was done and I felt I understood how the truck handled, it was time to see what I could make it do. I was a bit disappointed because the truck didn’t have the type of acceleration I was expecting from an all-out dirt racing truck; it was actually somewhat anemic. When I put my foot to the floor, the truck seemed to hesitate, then settle in the rear; then it would go, but it wouldn’t jump forward, it would run forward. I honestly think my dad’s stock Toyota Tacoma has more off-the-line acceleration than these trucks did. Maybe I was expecting too much; I don’t know.
This guy went in the last group of the day. I think he was a ringer because he was just killing it out there and lapped the other truck on the track twice in five laps.

I will say this, though: Even though the trucks didn’t accelerate the way I thought they would, it was still a blast. If you’re ever in the Las Vegas area and have the extra hundred bucks to blow, I definitely recommend taking the two or three hours out of your day before hitting the casinos and take in the Vegas Off Road Experience. You will not be sorry.
All in all, a great time!
Back to Post
About Mike Aguilar 388 Articles
Mike's love of cars began in the early 1970's when his father started taking him to his Chevron service station. He's done pretty much everything in the automotive aftermarket from gas station island attendant, parts counter, mechanic, and new and used sales. Mike also has experience in the amateur ranks of many of racing's sanctioning bodies.