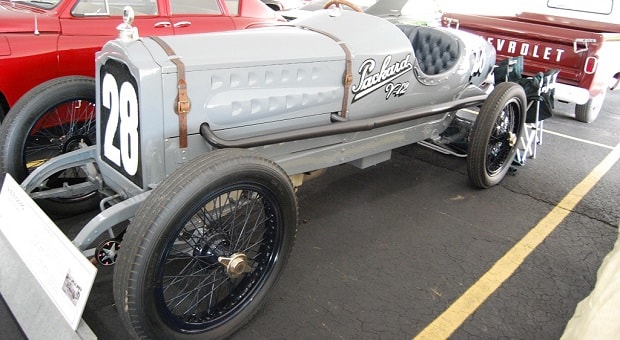 In 1915, Packard’s new twin six was a vehicle that would place the company in the luxury field. The Twin Six designation was used on a 12-cylinder engine made from two six-cylinder blocks, and the new car set the tone of Packard’s overall thinking for many years.

The series designations were based on the wheelbase of the cars and not on the horsepower they produced. The 1-25 models had a 125-inch wheelbase and the 1-35 models had a 135-inch wheelbase. In the passenger car market, the Twin Six two-door coupe carried a $2,700 price tag and the three-passenger coupe was priced at $3,700. The touring car in the 1-25 line was priced at $2,750 and the 1-34 version of that body style was $400 more.

Both series used the same engine, a 12-cylinder job with a 3 x 5-inch bore and stroke. That factored out to 424 cubic inches. The chassis of the new Twin-six bore little resemblance to earlier Packard chassis. It used a pressed steel channel section that was six inches deep. The front axles were of I-beam design with roller bearings. The semi-floating rear axles were constructed from beam tubular steel.

One of the Twin Six’s best testimonials came from a British writer who said, ‘For 20 years, Packard models like the Twin Six held a reputation of being in America what the Rolls Royce was in England.’

This car was raced prior to the time that the concept of having a pit crew arrived. A “riding mechanic” sat in a buddy seat next to the driver and had to maintain fuel pressure and oil pressure by the use of a hand pump, operated while the car was actually racing. A wooden handle attached to the dashboard was the riding mechanic’s only safety restraint.

In 1920, Packard shipped this racing car to Argentina, where it won the “Championship of the Mile.” It was raced successfully throughout South America until the end of the decade. Then it was simply placed in a shed and forgotte. Seventy years later it was discovered, still in amazingly good condition, in a shed in Paraguay. It now resides in the Gilmore Car Museum (www.GilmoreCarMuseum.org.

This early “factory experimental” racing car has serial number PMC-X 0051. It utilizes a 112-inch wheelbase and the Twin Six engine makes about 88 hp. The car’s claimed top speed is 104 mph. It would be a real experiment to see if someone today could actually drive it quite that fast!