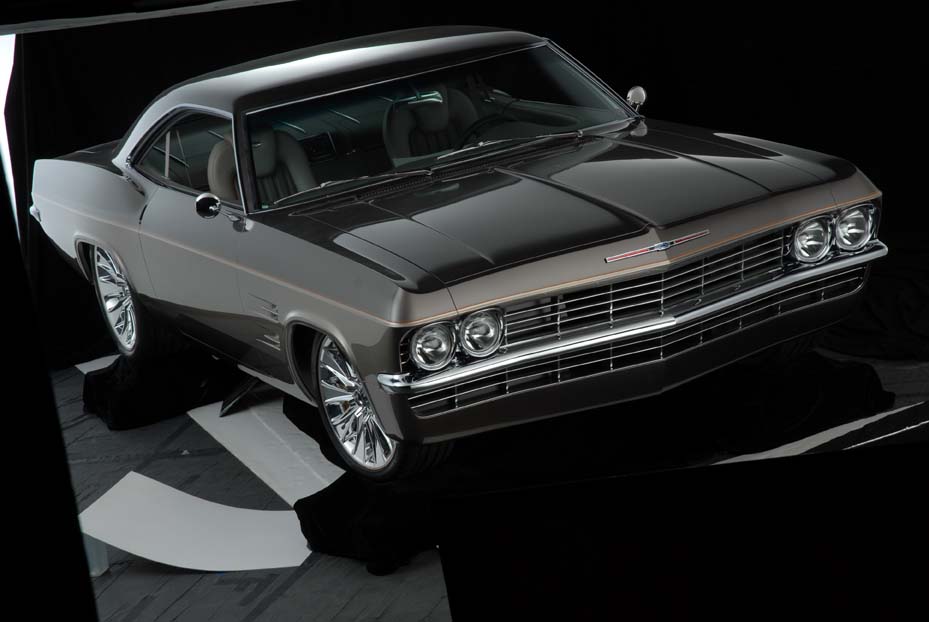 In the hot rod world, cars are often not what they seem, and Chip Foose’s 2015 Ridler-award winning 1965 Chevrolet Impala custom is no exception.

Nicknamed the Imposter, this Impala takes the idea of hiding in plain sight to an epic level, answering Foose’s question: “what if” Chevrolet’s Corvette studio modeled a muscle car in 1965?

Built for Canadian construction magnate Don Voth, the car features custom Foose styling touches throughout, designed to evoke the 1965 Corvette Sting Ray. While resembling a stock 1965 Impala, Impostor has been chopped, lowered, shortened, narrowed, and has a significantly altered wheelbase.   It’s been stretched over 7″ to work in the Impala body. The Corvette C6 drivetrain and suspension ensure that Impostor performs as well as it looks.

The Impostor custom will be on display at the Monterey Historic Automobile Week, making several appearances including  on at the the exclusive Carmel Mission Classic, an event with only 50 cars invited to display, in Carmel, CA  on Wednesday, August 17th.

“The Monterey Historic Automobile Week is one of the greatest car gatherings anywhere and we’re honored and excited to be taking part,” said Chip. “I’m very proud that the Impostor will be in Monterey to provide a unique retro and modern twist on such a historic event.”