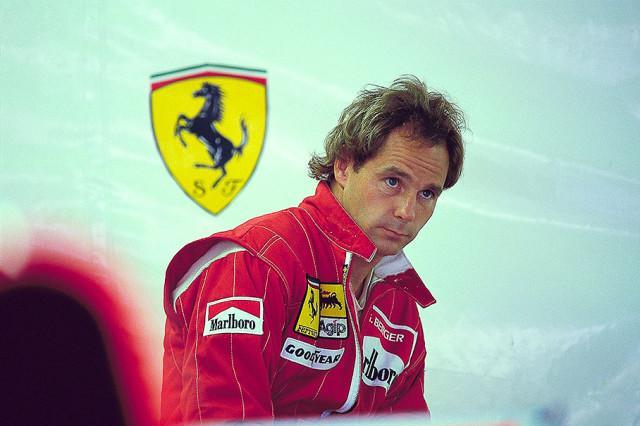 The number of colorful characters emerging from the world of F1 seems to grow fewer and fewer by the decade. As corporate interests strangle most of the personality and fun from the spectacle of racing, viewers are gifted another diplomatic, dull lecture or recitation of the race events without any real insight. It’s a common complaint, but thankfully, there remain a few outspoken, headstrong types who manage to keep a smile cracked across the viewers’ faces.

Gerhard Berger was always a class act, an assertive driver, and a hilarious, if slightly dangerous prankster. He was a driver often overlooked because of his effervescence and his laid-back attitude, but beneath his carefree demeanor was a serious, steely competitor. No question, his willingness to put it on the line was clear, and in his early days he was not averse to taking massive risks. On and off the track, the tall, amiable Austrian was always an entertainer, and brightened up the paddock in a way only a few icons really could.

Berger almost lucked his way into F1. His father prevented the young Gerhard from racing in his teens, so he started off in secret. He was also quite tall. At 6’2”, his size would prove a problem as the cars from his era grew smaller with the development of aerodynamics. After a season racing a crashed Alfasud, he found a connection that helped get him into an F3 car, and despite his parents’ protests, he had enough money from his job as a mechanic to get going. By this stage, Berger was already 24 years old. Clearly, his route into the sport was not conventional, but his talent and daring helped him bound over the hurdles.

Berger started his career in FWD Alfasuds – not typical for an F1 driver.

Quickly rising through F3 into touring cars, Berger used his connections with BMW to supply a mid-field F1 team, ATS, with an engine. The turbocharged M12 generated plenty of power – enough to spin the wheels in any gear – but realistically, the chassis kept it from being competitive, though that wasn’t a major concern to Berger, who just wanted to have fun – after all, he had made to F1 in the matter of a few short years. However, his career nearly ended just after he began.

Just after starting in F1, Berger’s road car careened off a cliff after being involved in an accident outside of Salzburg. Thrown from the car, Berger broke his back and laid half-conscious on the rocky terrain. Miraculously, the car following Berger happened to be manned by two surgeons who specialized in back surgeries, and even had special infusions in their trunk. With their care, Berger was treated and avoided any serious, lasting injury. Lady Luck had smiled on him that day.

After spending several weeks in the hospital, Berger’s business acumen had him on a flight to London to meet his team boss, Jackie Oliver, who had heard of his accident and was concerned about Berger’s fitness. Careful not to give anything away, Berger feigned his readiness for the upcoming race by using his hands to support his head – his neck muscles were seriously weakened by the surgery. This raised Oliver’s eyebrows, but it was convincing enough to get Berger back in the seat. As always, Berger’s self-belief and friendly nature endeared many to him, but ultimately, he knew what he wanted, and was dedicated to achieving these goals, even if it involved a little bit of trickery.

After two lackluster years with ATS and then Arrows, Berger moved to the Benetton team. With a decent chassis and a powerful BMW engine, the Benetton gave Berger a platform that allowed him to show his considerable talent. With some clever tire strategy, he managed to win his first race at the 1986 Mexican Grand Prix. From then on, the young man was considered a threat, and Ferrari signed him for the following year.

Berger’s success started with the wildly-colored Benetton B186.

Now with a serious car, Berger stood a chance to be a regular race winner – and he was. Despite his growing success, he managed to keep a cool head and still actively enjoy life. Never the type to shun a good chuckle, Berger was perhaps better known for his pranks than his driving. Famously, he wound up the stern Ron Dennis by closing his oxygen bottle while scuba diving forty feet below the surface, prompting the irate team boss to shoot up “like a rocket.” Dennis received more abuse in the form of being thrown from a boat in sharky Australian water. While this might have been shocking enough, the elated Berger threw a bit of chum in after Dennis, just for good measure.

The famously severe Ayrton Senna also endured some of Gerhard’s macabre sense of humor, though admittedly, he went easier on the Brazilian. Filling Senna’s hotel room with frogs and snakes, MacGuyvering a smoke bomb with a hotel fire extinguisher and setting it off in Senna’s room, clipping out Senna’s passport photo and replacing it with pornography were all casually committed by Berger, who managed to see the funny side and kept heads from getting too big.

Gerhard’s sense of humor had the effect of lightening up the serious Senna.

During a helicopter ride over Monza, Senna boasted about a tailor-made, carbon composite briefcase he had just received, claiming it was indestructible. Testing the Brazilian’s theory, Berger grabbed the case and hurled it from the helicopter. “It fell somewhere near the course but we found it again,” claimed Berger innocently. While those sorts of jokes might rub some people the wrong way, men who drive racing cars professionally need a little extra to get their kicks.

His career wasn’t all jokes and lightheartedness, however. In the cockpit, Berger was a determined driver, and while not the most focused, was never fearful of pushing the limits, and capable of going too far at times. As one of the strongest hard-chargers from the late eighties, Berger’s aggressive, curb-hopping driving style correlated with plenty of retirements, as he would often wring the neck of the car in searching for that last tenth. At Imola in 1989, that approach would cost him.

Sideways, bounding over the curbs, Berger was always hard on the car.

Tamburello was a daunting, high-speed kink taken at two-hundred miles an hour, with little runoff area. It’s not surprising then that when Berger’s front wing failed as a result of his aggressive driving style, the resulting incident was spectacular and mortifying. Plunging straight off the course with full tanks, Berger’s car bounced off the wall with a violence rarely seen outside of the oval. The car caught fire within seconds, and only due to the incredible response from the medical team was his life saved. Incredibly, he only sustained heavy burns to the hands, and missed but one race, but watching the footage, many must have have assumed the worst.

Berger kept his form at Ferrari, but a long string of retirements pushed him towards McLaren, where he partnered with his friend Senna for a trying three years. Always in the shadow of the great Brazilian, Berger never quite performed as well as he could have, but stood out as a regular front-runner. Moreover, he possessed a supportive, empathetic personality not common among top-tier racers, who tend to be quite selfish. In a world of serious men, Berger helped remind the audience that racing was just a sport, and it needed to be fun and friendly.

As Berger became one of the old guard, he never lost his edge. Calmer, perhaps a little wiser than before, Gerhard jumped back to Ferrari, where he remained for a mediocre few years before his swan song seasons at Benetton. Though he was often snapped joking and giggling, his staunch determination would show itself on occasion. Recovering from sinus surgery, fearing contract renegotiations, and dealing with the death of his father, Berger put on a blistering performance at Hockenheim in 1997, where Michael Schumacher and Mika Hakkinen could only watch as Berger’s Benetton became a speck in the distance. Under all that pressure, the affable Austrian pulled a rabbit out of his hat, and showed exactly that, despite being nearly 38, was still as quick as anyone.

Berger’s perspective on racing never changed dramatically. Ever the bon vivant, Berger knew that F1 was only one aspect of his life, and never dedicated himself to competing the way he dedicated himself to enjoying all life had to offer, whether it be women, parties, vacations and the like. What made him unique amongst F1’s all-too-short list of playboys is that he never was arrogant, never crude or petulant, and always very generous. Of course, he was focused on his own ambitions, but was always a gentleman.