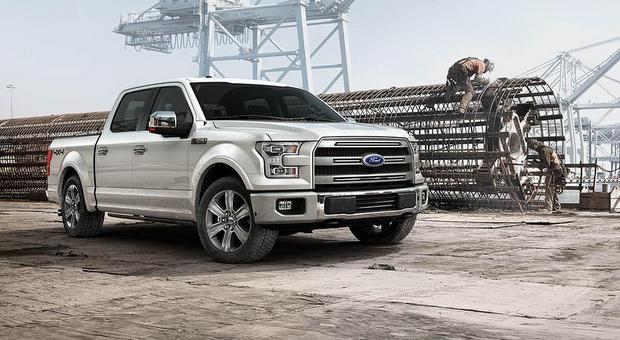 Ford debuted the re-designed 2015 F-150 at the 2014 North American International Auto Show in Detroit, showing off a lighter body and new technology.

The biggest change for the 2015 F-150 is the use of aluminum for most of the body components — doors, hood, engine compartment, bed and tailgate. This is a first for full-size trucks and results in a weight loss of about 700 pounds, which will help the F-150 accelerate quicker, brake better and achieve better fuel economy. The base frame is still made out of high-strength steel with eight cross sections, but we’ll have to wait and see if the aluminum body is just as strong as the old steel body. Rest assured that Ford’s marketing team will do everything they can to alleviate your fears about their aluminum components.

Other notable changes for the 2015 model aim to make your life easier, with additions of a deployable tailgate step, remote opening tailgate and integrated load ramps. Higher trims will receive a panoramic moonroof, a surround view camera and much more.

Engine offerings include a new 2.7 liter Ecoboost V-6, NA or turbo 3.5 liter V-6 and a 5.0 liter V-8, all of which are mated to a six-speed automatic transmission.

The exterior and interior design hasn’t evolved too far from previous models, aside from a few modern tweaks here and there. Ford has stepped up the elegance in the F-150 though, in a likely attempt to lure some customers out of their luxury SUVs.

The 2015 Ford F-150 is expected to arrive in dealerships in late 2014, and we’ll get more information about power and capability figures as its on-sale date approaches. MSRP will also be of interest to many as the cost of aluminum construction is much higher than that of steel.

Has the 2015 F-150 taken a step in the right direction? Sound off in the comments section below!