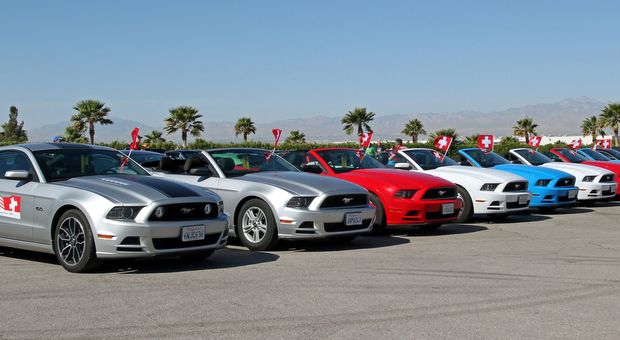 Mustang turns 50! Let’s celebrate! And celebrate we did, from April 17th thru April 20th, 2014. And when I say “we,” I mean it in the collective form, as people from all over the world came to either Las Vegas or Charlotte to participate in the biggest birthday bash you could possibly imagine. There were so many countries represented; Australia, France, Mexico, Canada, England, Norway and Denmark, just to name but a few. This is remarkable considering the Mustang will not officially be an international car until the release of the 2015. The Mustang Club of France certainly knew how to attend in style; they pre-rented all the Mustangs available in the Las Vegas area, all in either Blue, White, or Red, the colors of their flag. When they parked them at the show they did so in color sequence. I was told there were over 150 club members in attendance!

For the Mustang Club of California, we met up in San Bernardino with members from several other Mustang clubs to form a caravan of 35 Mustangs of all vintages. Our destination was the birthday bash in Vegas. Along the way we participated in a poker run; this gave everyone a chance to gas up, get something to eat, and get out and stretch.

The event was held at the Las Vegas Motor Speedway, located at the northern end of Las Vegas. There was so much going on each day in addition to just trying to see all the cars. Opening ceremonies were held on Thursday with such dignitaries as Henry Ford III, Hal Sperlich and others. Ford had the Vehicle Ride & Drive, where one could take a new Ford car out for a drive on a specially designed course in the center of the speedway. Seminars were held on various topics related to Mustangs throughout day. For those who wanted to exercise their cars, there was the Open Track course. While these things were going on, there were NASCAR drivers doing practice laps around the speedway. On Saturday the raceway was opened for those who wanted to drive their pony on the big NASCAR track. That was quite a sight to behold. Want more? Well, it seems our Air Force was more than willing to add to the festivities by flying over the speedway many times each day. Of course it could have been the fact that Nellis AFB is close by, but still, it was really something to see and hear.

Each evening there were different venues to attend in a continuing celebration of everything Mustang. Saturday evening a banquet was held at the Luxor Hotel & Casino. Guest speakers included Henry Ford III, Hal Sperlich, and Bob Fria, just to name a few.

Of course if you chose not to go to one or more of the special evening venues, there was still plenty to see. How about the constant rolling car show down the main strip in Vegas? Everywhere you looked, everyone was celebrating the Mustang’s 50th birthday.

This was a once-in-a-lifetime event. I feel very fortunate to have had the opportunity to participate.