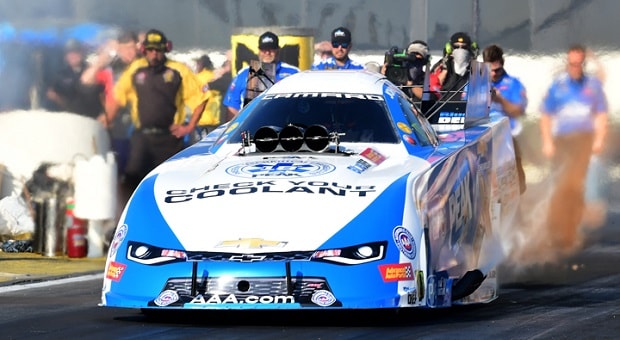 Aside from four massive engine explosions, John Force has been quiet lately. The 16-time driving champion in NHRA Mello Yello Drag Racing Series Funny Car competition, as well as a 20-time team owner of championships in both Funny Car (19) and one Top Fuel title, John Force is in a driving slump.

The owner of 144 national event wins hasn’t carried a Wally trophy to the Winner’s Circle since Gainesville of 2017, and yes, those four explosions in 2018 haven’t kept his confidence up. Force had a qualifying explosion at the season starter in Pomona and went out in the first round, had another in the second round of eliminations at Phoenix that sent him to hospital (and back to the track to watch daughter Courtney take her first win of the season).

At Gainesville, there was another explosion but he still made the call for race day, only to lose to Courtney; he made it to the second round of the Las Vegas Four-Wides, failed to qualify in Houston, took a healthy runner-up result at Charlotte’s Four-Wide race, lost in Round 1 at Atlanta and again at Topeka only to rebound and race his way to the semifinals, and then DQed at Joliet by crossing the centerline and leaving a nice trail of oil, costing him 15 points.

These results leave the patriarch of John Force Racing in 10th place as the series tends to its Richmond return after a decade away this weekend. Despite his fourth explosion and crash in Joliet qualifying, Force is excited about the series’ return to Richmond, the site of late teammate Eric Medlen’s final victory in 2006. The 69-year-old Force has earned four victories at the track, in 1996, 1996, 1999 and 2000.

Although he’s had difficulties this year, “My car is starting to act like a race car again,” Force said, “and these young kids, they worked all night in Chicago to put a [backup] car together after I totaled the other one (in qualifying). They’ve got heart. You can teach everything else, but you can’t teach someone to love what they do.”

The explosion in qualifying at Joliet wasn’t without its physical ramifications. He was sore, yet never thought of not competing on Sunday. “They checked me out and there was nothing broken,” Force stated. “I’m just sore, all bummed up in the shoulders. I hit the wall really hard like three times, but I’ll be fine.”

Force has been banged up many times this early season and it’s brought questions from fans and media alike about Hall of Famer’s future, but as he approaches his 750th NHRA national event appearance, the winningest driver in drag racing history is getting inspiration from the youth around him.

No, not his Top Fuel champion daughter Brittany, nor his Funny Car champion son-in-law and team president Robert Hight. Not even from current points leader and three-time 2018 national event winner daughter Courtney. It’s two of his grandchildren, Autumn Hight and Jacob Hood, who put Force into race mode.

John Force recently spent time watching the duo racing their NHRA Jr. Dragsters at Barona, Calif. where Autumn secured her first victory. “In Autumn and Jacob, I saw myself again, younger, dreaming the dream,” he said. “I came out of there with a different heart. I really do love what I do and I don’t care what they say, I can still do it.”

John Force attempts to earn his fifth Richmond Wally in the NHRA Virginia Nationals this weekend, on the suburban Dinwiddie dragstrip. Mother Nature might have other ideas, with forecasters calling for clear weather Friday, morning thunderstorms on Saturday and an 80% chance of thunderstorms on race day Sunday.