The NHRA Mello Yello Drag Racing Series Countdown to the Championship battle just got a little more interesting at the AAA Texas NHRA FallNationals, at Texas Motorplex. The fourth of six playoff events left fans awestruck as the current point leaders fell to their respective challengers and left us all wondering: Who will come out on top at the upcoming 2017 season finale? 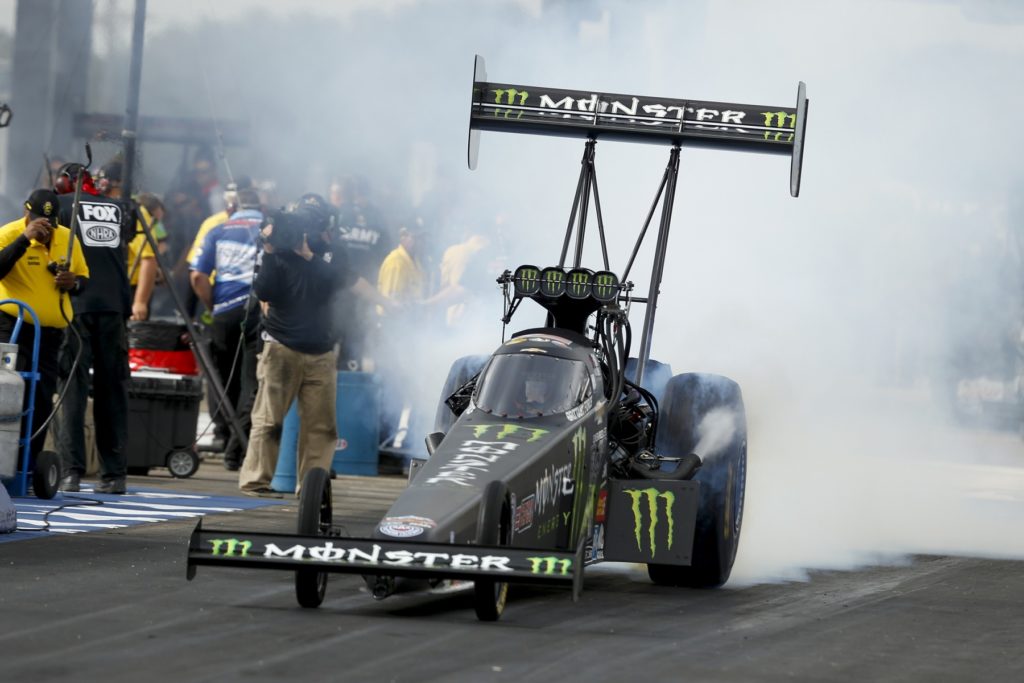 The John Force Racing team seemed to have all the answers this weekend at the 32nd annual AAA Texas NHRA FallNationals. Despite points leader Steve Torrence racing to a No. 1 qualifying position, the East Texas native saw his high hopes diminish when his Capco Contractors dragster lost control after crossing the finish line during the second round of final eliminations.

Although Torrence pulled off the win during this round and walked away uninjured, his winning Top Fuel dragster wasn’t so lucky. Torrence’s misfortune would give Brittany Force, the daughter of famed Funny Car driver John Force, the chance to pull off an astonishing victory after defeating Terry McMillen, Doug Kalitta and even Torrence in a backup car before moving on to Sunday’s final elimination round against Shawn Langdon.

After piloting her Monster Energy dragster to a Texas Motorplex elapsed-time record of 3.681-seconds at 326.87 MPH to defeat Shawn Langdon and his Global Electronic Technology dragster’s 3.693-second pass at 326.56 MPH, Force earned her third victory of the season and moved into second in the points standings behind Torrence.

“A lot needed to happen this weekend and it all seemed to work in our favor,” said Force. “We had to take on Doug Kalitta and Steve Torrence, the two people in front of us in the standings. While everyone has been struggling trying to take them down, I felt confident in this team and the fact that we were going to turn those win lights on because that is what we needed to do. This is a huge win that gives us a chance to continue climbing the ladder to the 2017 Top Fuel Championship.” 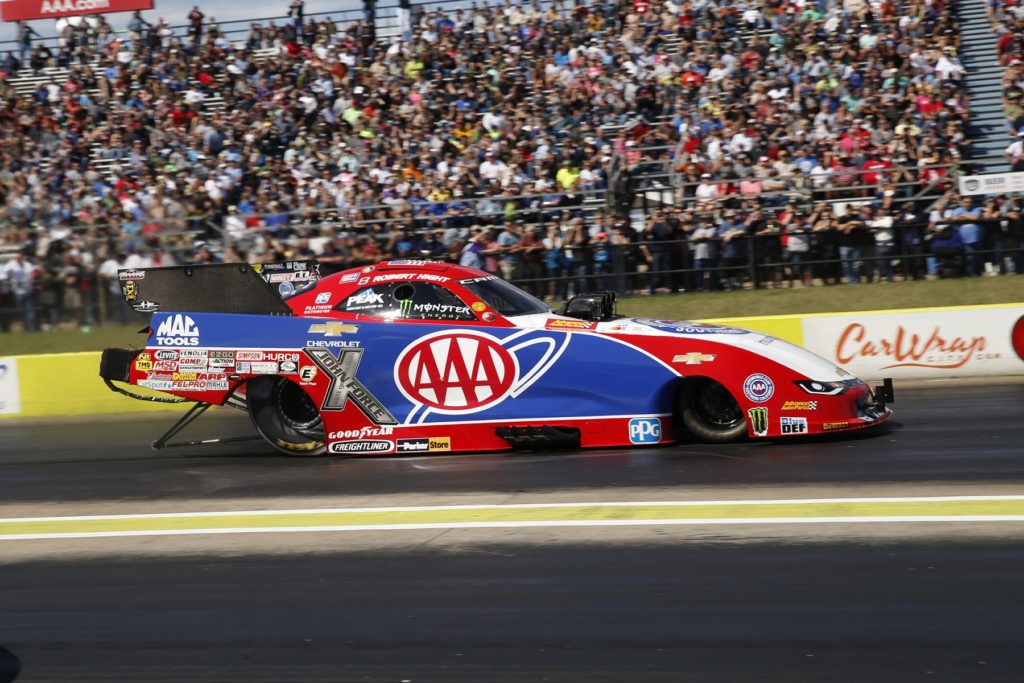 Much like his teammate, John Force Racing Funny Car driver Robert Hight also took down the Funny Car point series leader at Texas Motorplex. On his way to an astounding victory, the No. 1 weekend qualifier took down Jim Campbell, Alexis DeJoria, who announced her retirement following the 2017 season, and Tim Wilkerson. While Ron Capps took down Hight’s teammates John Force and Jack Beckman on his way to the final elimination round, his NAPA Auto Parts Dodge was unable to come out on top.

Instead, Hight’s 3.877-second pass at 332.24 MPH in his AAA Texas Chevrolet Camaro SS defeated the reigning Funny Car world champion and gave the John Force Racing driver his third win at Texas Motorplex and his fourth win of the 2017 season.

“This was just the win that we needed,” said Hight. “We were 44 points back going into the final round and, had we lost, that would mean that we would be 64 points back. Winning brought this number back to 24, which is a little over a round with two races left.”

While Hight now sits only 24 points behind the Funny Car reigning point champion, he will have to keep up this momentum going into the upcoming 17th annual NHRA Toyota Nationals. 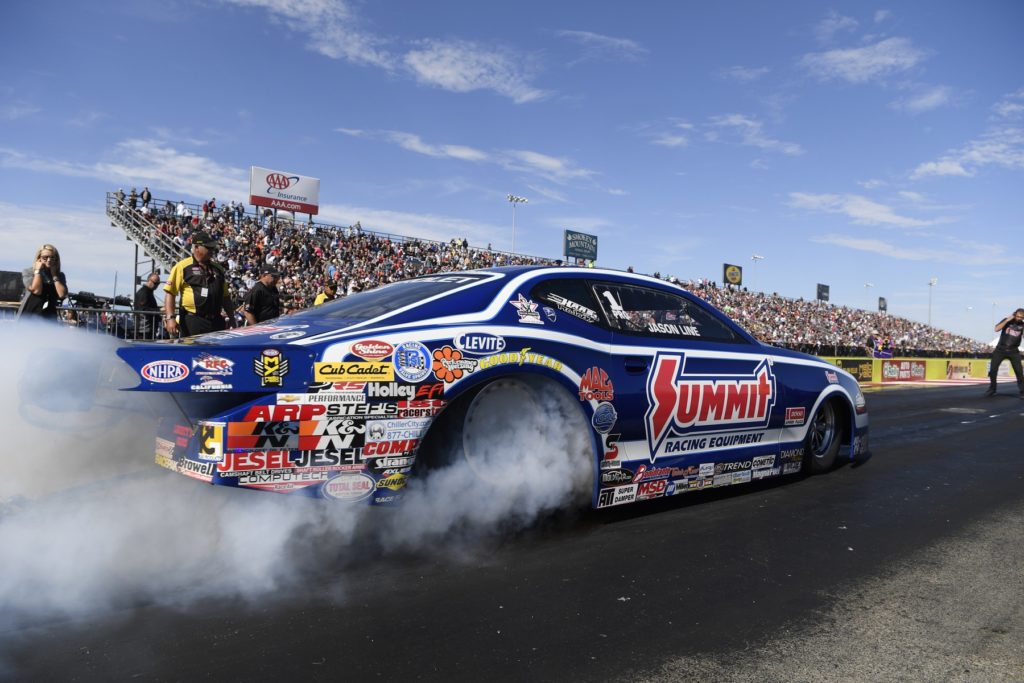 While John Force Racing drivers earned victories in both the Top Fuel and Funny Car divisions, KB Racing driver Jason Line found himself in the winner’s circle for the second time this season and 27th time of his career at Texas Motorplex.

After racing past Alan Prusiensky, Texas native Alex Laughlin and Brian Self on the way to his third final round of the season, Line bested Ray Skillman driver Drew Skillman after running a 6.548-second pass at 211.20 MPH against Skillman’s red-light start.

“We picked up at the perfect time,” said Line. “Hopefully I am giving Greg Anderson, Bo Butner and everybody else something to think about for the next couple of weeks. If we didn’t win here this weekend, the chances of winning the championship were going to be slim to none. Now, we actually have a chance at this.”

While Line earned a podium finish this weekend, he continues to sit behind point leader and teammate Greg Anderson and Bo Butner in the Pro Stock point standings going into Las Vegas.

The NHRA Mello Yello Drag Racing Series continues with the 17th annual NHRA Toyota Nationals, at The Strip at Las Vegas Motor Speedway, October 26-29, 2017. Stay tuned to RacingJunk.com for all your NHRA coverage!