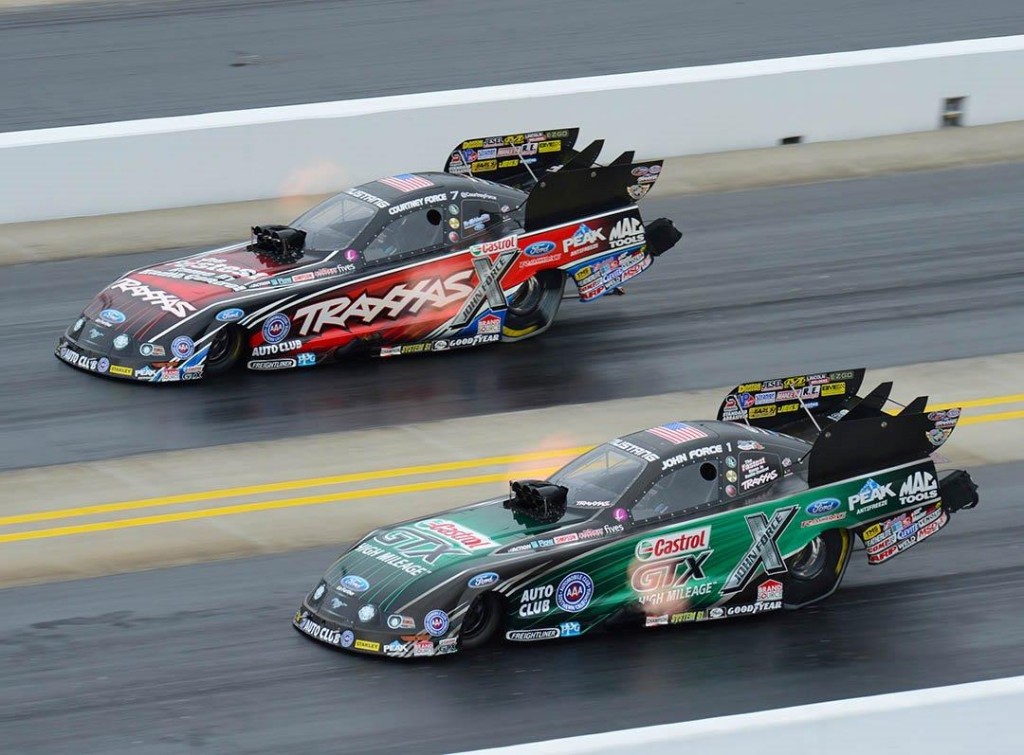 Just when you think the NHRA Countdown to the Championship couldn’t get any more complicated, the next few weeks are poised to offer another NHRA first.

John Force’s split with longtime crew chief, Jimmy Prock, is sure to shake things up and he’ll need to approach this week’s Toyota Nationals with a rejuvenated attitude for his Castrol team.  He’s battling Funny Car points leader, Matt Hagan for first, but  right in his rear view mirror is daughter, Courtney, 36 points in arrears of  her dad and 72 away from Hagan.  It marks the first time a father-daughter rivalry is coloring the championship.

The roller-coaster of emotion is evident for both Funny Car Forces, a conflict of sentiments that must be held in check to focus on the fight for the championship.  For John, doing his job and representing his sponsors has always been key and his focus is legendary. The goal is always simple – beat the person in the next lane.  But it’s a little harder when you’re also a proud Papa. 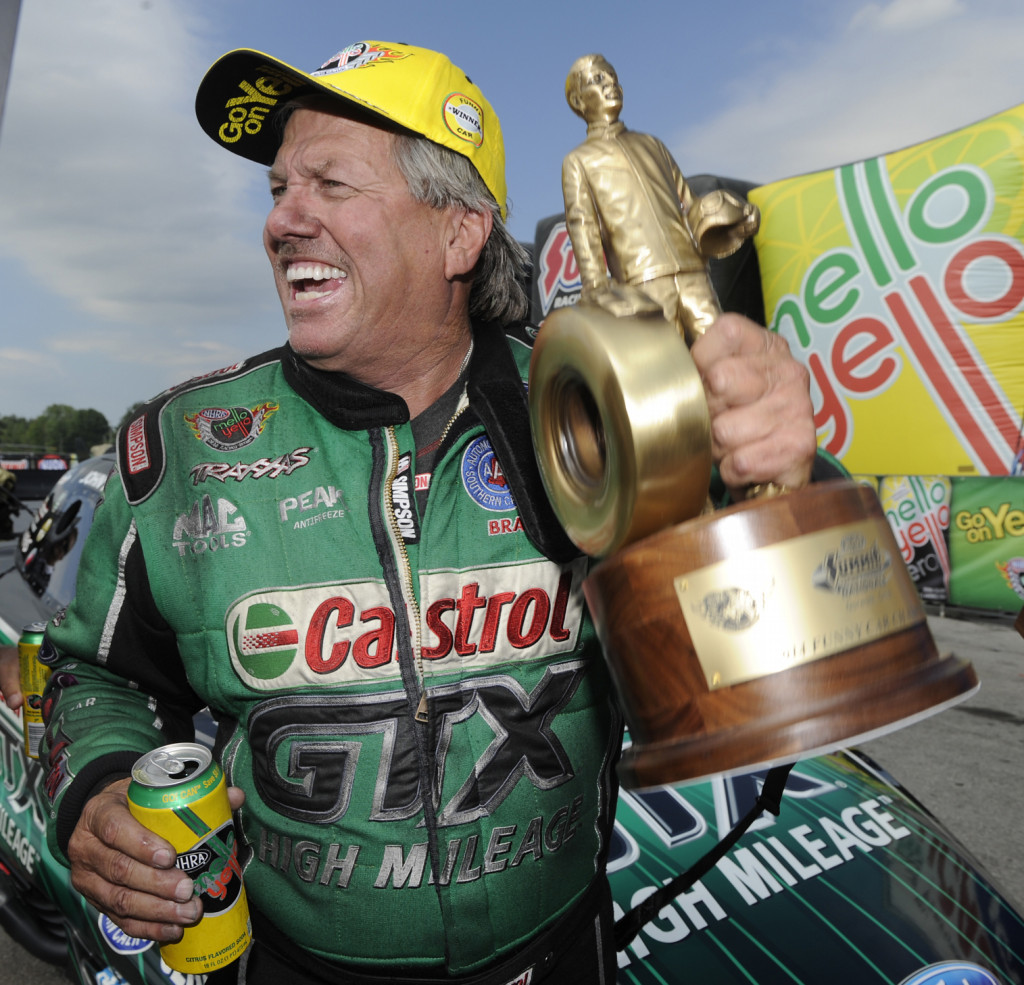 “Hagan is going for another championship, but so am I,” said the 16-time champion. “I am trying to get some sponsors and they want to go with a winner.  The Funny Car championship is so important.  I am also battling my daughter Courtney and I can’t count out Robert Hight and the Auto Club Ford.  We struggled in Reading but we have two races to catch up.  We came back in 2010 and got the championship on the last day.  I’ve been there.

“Battling your own child for a championship is hard for a couple reasons.  You want your kids to succeed, but I also have to win.  That is why we have all the sponsors on all our race cars. You still have the fire in your belly and I know Courtney has that fire.  She has a great attitude and I know she has a good race car.

“I loved sitting here and listening to her talk.  She’s just like her dad.  Brittany, my daughters Ashley, Adria, they’re all different.  But I see the fire in her.  She loves this sport… the way I do.  It’s what my life’s all about.  I never realized how much I wanted it and the fear of losing it.  I had the same fear when I laid in the hospital bed in Texas (in 2007 following a crash at the Texas Motorplex).  I laid there for five weeks.  They were telling me it was over. 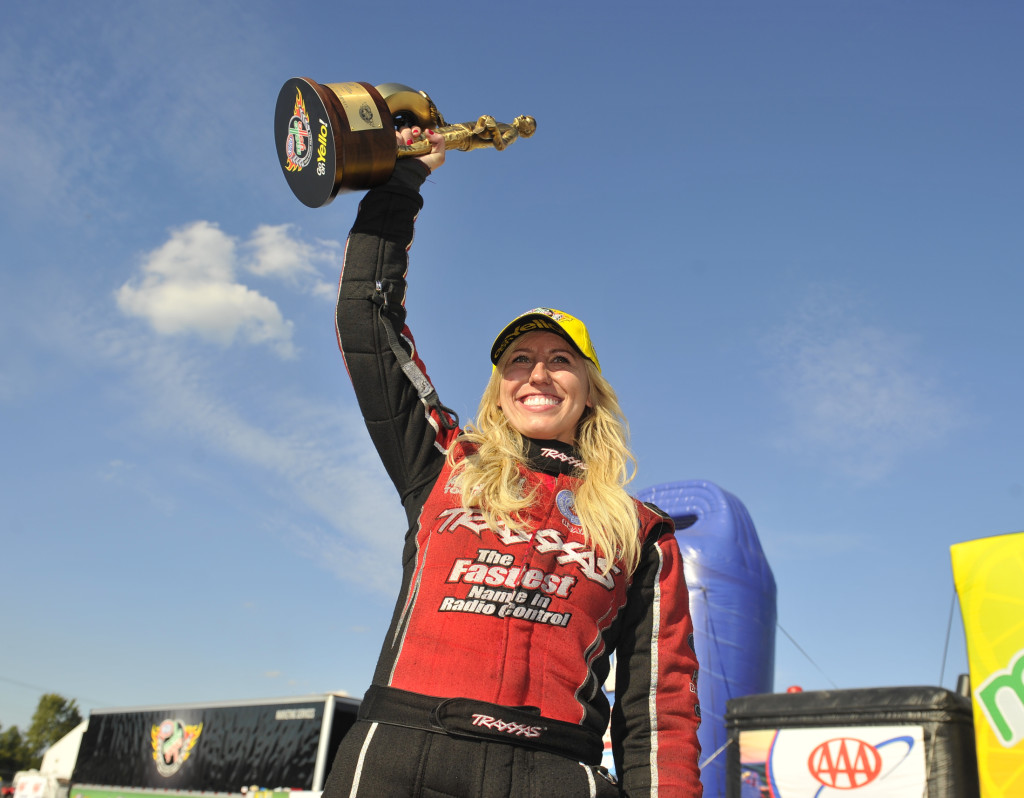 “Nobody tells me anything.  I’m really thick-headed like my dad.  I always believed that if you stand up and you fight and you’re honest, you do the best you can, with a little help from the good Lord, the people around you, you’ll be okay.  If you win, that’s great.  That’s the icing on the cake.  But if you lose, and you gave it everything you got, you still won.  That’s the way my daughter fights me.  Oh, she aggravates me sometimes when she tries to get in my head because I did all that smack talk back when I was her age.  I’ve grown out of it.  I just race. But to hear her, I see so much of myself.”

Likewise for Courtney Force,  racing – and winning – is in her blood, literally.  She’s mathematically competitive in the Funny Car championship after having two wins.  She also knows that the 72 point gap between her and Matt Hagan may seem insurmountable, but if she turns on four win lights in Las Vegas this Sunday, there’s a chance.  It’s not just her dad she has to beat. To win, she has to trailer Hagan, or rely on a teammate to beat him as soon as possible if she is going have any chance of getting her first championship.  Going against her dad for such a monumental round of racing is worth 20 points in the championship.  It’s her job, but although she adores her dad, it’s not easy to forget that she’s could be racing him on Sunday.

“A little bit,” Courtney said reflecting over the past weeks.  “But to me it just those two people that are my competition and I’m just fighting to get around.  Obviously, dad is on my team, but we’re both going after that championship and only one person can get it.  We both have to get around Matt Hagan first.  He was able to get around us at the last race in Reading, Pennsylvania, and we’re going to have to fight for it in Vegas and Pomona with two left.  You know, I think there’s a lot of people who have a shot at it right now.  We’re all very close in the points.  Although if I’m going against my dad, I want the championship for myself, for my team, and for my sponsors.  It’s just something I really gotta work hard to get to.” 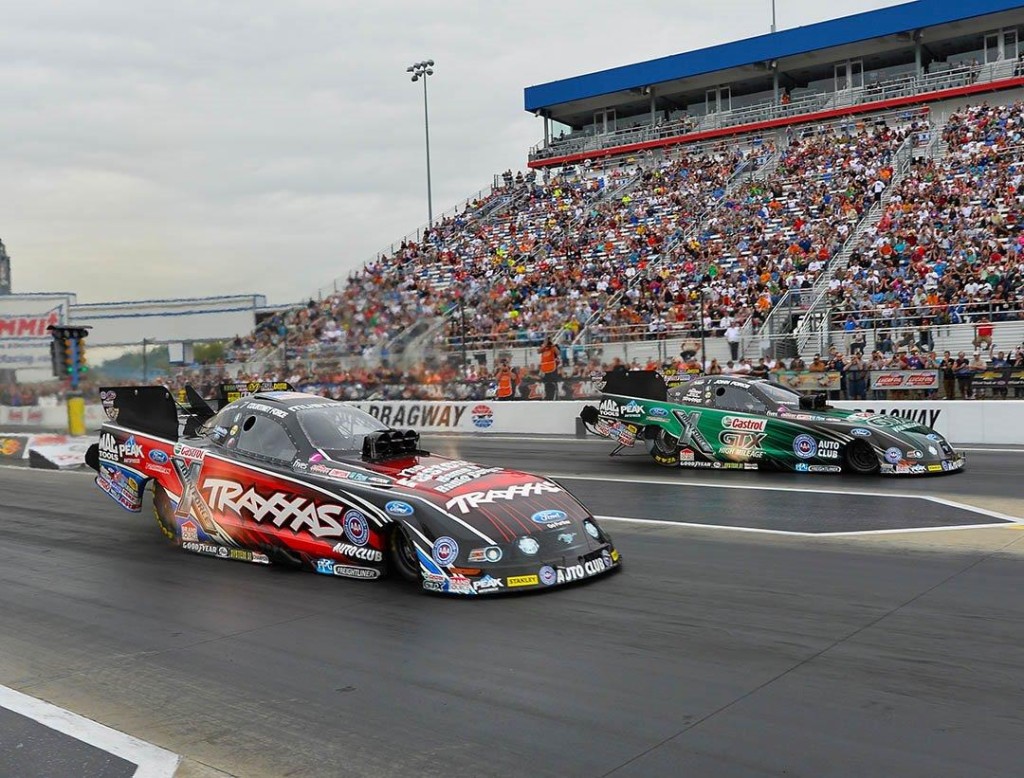 It’s just eight rounds to go and the Funny Car driver has her team pumped up for the challenge with Ron Douglas and Danny Hood calling the shots.  Although, Hagan is her main concern, it’s really her teammates that are the toughest to beat.

“Yes, I definitely think so,” stated Force referring to her JFR team.  “They have been some of the most consistent cars out here.  So, it’s tough trying to keep up with them most of the season.  We got our car turned around in the Countdown and won two events and started to pass people.  That’s exactly what we needed, to get that momentum going. We lost some it in Reading, but we’ve had good luck at both Vegas and Pomona before.  I’ve been to the finals in Vegas before and I’ve done the same at Pomona, although it was the Winternationals, I’ve done well at that track as well.  We’re keeping a positive thought process going into these last two events.  Knowing we have good cars here before and just hoping that we can get around Matt Hagan in time and stay ahead of the guys that are right behind us.”

So how would a win change things for the Traxxis Ford team?

“It would definitely be a high,” said the smiling Force.  “If we can get the win in Vegas, I mean that gives you that extra boost you need in the points to get the edge in the points over the other guy.  It would make you feel that you have a car that can win the championship and it would just take you that much closer going into the Pomona race.”

Dad has experience on his side, though. Years of championships and rivalries have honed his strategies, and love for his kids isn’t going to encourage him to temper his talents or give in to pressure.

“Whether you’re ahead in the points or you’re behind requires you to race with two different styles,” said John.  “When you’re in the lead, you have to be protective of the points. When you’re behind, you open up and it’s guns-a-blazing.  That’s how I’m going into Vegas.  I told  Courtney and Brittany, ‘You can’t look at those races or any round or qualifying or final any differently than you did opening day at Pomona. The race car doesn’t know the difference.  If you set the pace of where you’re going and do what you’ve always done, then your best potential will come out as a driver in the driver’s seat.’  So, nope, I’m going to address Vegas and Pomona as any other race and I’ll see how the cards fall.”