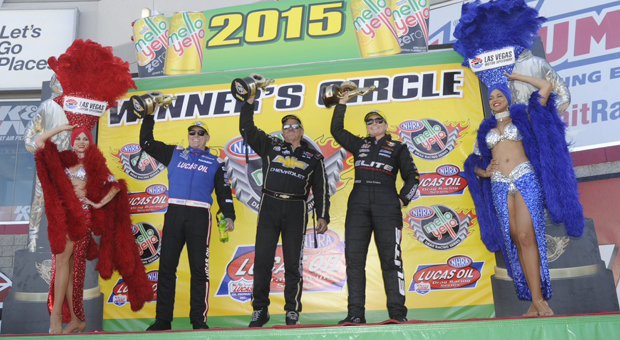 John Force, Richie Crampton, and Erica Enders-Stevens all the hit the jackpot in Las Vegas this Sunday at the SummitRacing.com NHRA Nationals, ending the nitro category dominance that Don Schumacher Racing had held in the first four events of the 2015 season, taking seven of the first eight titles. John Force Racing and Morgan Lucas Racing shuffled the cards and dealt out aces to win the Funny Car and Top Fuel titles, respectively, at the LVMS Strip.

Erica Enders-Stevens, feeling under the weather despite winning her second consecutive K&N Filters Pro Stock Challenge on Saturday, managed to pull herself together to also win the Pro Stock division, which set her up to win an additional $25,000 NHRA bonus for taking both events, totaling a $100,000 Pro Stock payday.

Australian Richie Crampton continues to impress after winning last year’s rookie title, and in Las Vegas he proved there is no such thing as a sophomore slump for this Lucas Oil Top Fuel pilot with a stirring victory on Sunday.

Crampton secured his first victory of the season after winning at least one round in the previous four races as well as qualifying in the top half in each race to start the year for Morgan Lucas Racing.

“It’s huge,” Crampton said.  “Obviously, we want to win right out of the gate, but that hasn’t always been the case for MLR.  To win in the fifth event and to go to the final at the Four-Wide Nationals, we’re gathering some good momentum.”

Crampton reached the final round in Charlotte two weeks ago, but NHRA doesn’t count that as an official final-round appearance.  That means Crampton is still a perfect 3 for 3 in finals, including victories in Englishtown, N.J., and Indianapolis in his rookie season.

“It’s a huge boost for the entire team,” Crampton said. “We’ve got a great hot-track race car, and we all know how well (crew chief) Aaron (Brooks) can run when the weather is cool.  He’s just phenomenal right now and one of the best around.  I’m extremely lucky to get to drive such great equipment.”

Lucas had been at each of Crampton’s first two wins, but he wasn’t racing in Las Vegas this weekend.

“I did not text Morgan all day long, which is very rare,” Crampton said.  “I usually send him a picture of the ET slip after qualifying runs and every round of eliminations, but I changed it up a little today.

“I know he’s over the moon and extremely proud of Aaron and the entire team.  I’m sure he was following along on Twitter and all the social media outlets.  I’m sure he knew exactly what was going on, and I’m sure he was pacing around his living room back in Indianapolis waiting to hear the result of the final.”

“It was a great day, and I’m lucky to share it with Force, a Lucas Oil teammate,” Crampton said. “That’s pretty good company to be in.”

For John Force, it’s all about family and team.  The 16-time champion Chevrolet Camaro Funny Car racer added to his win total, storming Las Vegas like Elvis and had his JFR teammate, Robert Hight right alongside him in the finals.  He would be the first to tell you that nothing has come easy for him over the years and that only hard work pays off.

In picking up his 142nd career Funny Car win and his first for Chevrolet, Force had to outrun teammate Robert Hight in one of the closest races of the weekend, a side by side race that was decided by two thousandths of a second at the finish line.  The win for Force was the culmination of months of planning and rebuilding both on financial and personnel fronts.

“It shows that when you get a plan you stick with it, you don’t change.  We struggled for five races and we couldn’t win a round.  It wasn’t just me, it was me and Robert Hight.  We made it work with a group that stood by us,” said an elated Force from the winner’s circle.

Force’s 248th final round was in jeopardy midday and without the help of the Auto Club Chevy Funny Car team prior to the semi-finals fans would not have been treated to the 45th all JFR Funny Car final round.

“We saw that we had a problem and we had to switch out motors.  This was about 40 minutes before the semi-finals.  All my guys and all of Robert’s Auto Club guys were working and we got it done just in time.  We had a tow strap break and my guys had to push this Chevy all the way up to the starting line almost,” recounted Force in a packed pressroom.

“(Crew chief) Jon Schaffer and these young guys, I call them The Replacements like from the movie, really came together today and I am really proud of everyone at John Force Racing.  We are rebuilding this team and today showed we are going in the right direction.”

Force had a tough first round match-up against Chad Head, but winning that round setting up a marquee matchup with reigning champion, Matt Hagan.   Force blasted down the right lane in 4.158 seconds as Hagan smoked the tires in the left lane, and advanced to his first semi-final of the season.  After scurrying in his pits making a late engine change, he once again flew down the track, this time against Kalitta Racing’s Alexis DeJoria with a solid 4.165 second pass on a much hotter track setting up the all JFR Funny Car final.

This momentum helped propel Force up to No. 6 in the Mello Yello points by the end of the day, a massive seven spot jump up the points ladder.

“The first round was when a little bit of stress crept in,” said a nervous Force.  “We haven’t gotten out of the first round a lot so once we got past that it got easier.  This Chevy ran good and we made eight good runs when you include qualifying and today.  I couldn’t be any happier.  We got two cars in the final.  It was a full team effort from the off-season to now,” said Schaffer, who became the youngest crew chief to lead Force to victory.”

In order for Force to capture career win No. 142, he had to outrun arguably the most consistent car on race day: the Auto Club Chevrolet Camaro driven by Robert Hight and tuned by Mike Neff.  Hight outran Ron Capps in the first round with the second quickest run of the session, a blistering 4.087 second run at 312.50 mph. It was a big upset for the No. 10 qualified Funny Car and helped move Hight up into the No. 3 spot in the Mello Yello point standings.

Erica Enders-Stevens turned in another brilliant driving performance to continue her run of success at Las Vegas Motor Speedway, winning the SummitRacing.com NHRA Nationals on Sunday to secure a second consecutive double-up at The Strip.

Enders-Stevens also won the K&N Horsepower Challenge on Saturday, completing the Challenge/national-event sweep for the second year in a row.  The sweep earned Elite Motorsports a $25,000 bonus to go with the $50,000 earned from winning the Challenge and Sunday’s winnings of $25K.

“I guess we can start saying Vegas is our lucky track,” Enders-Stevens said.  “Winning is very challenging, and to be able to do it at both Vegas races last year and then come back here and do it again shows what we’re capable of.  But it’s also very surreal.  There are so many tough competitors out there, and the bar has really been raised.  I’m just proud of my team.  It’s certainly a high-pressure situation, but my guys thrive on it.  They perform very well under it, and I’m so proud of them.”

The Las Vegas winning streak has reached 18 round-wins, including last fall’s national event.  She last lost a round here in October 2013 when she was with another team.  She also became the first driver to sweep the Challenge and national event in consecutive years since Bob Glidden did it in 1987-88.

“I’m just really proud for Elite Motorsports and Elite Performance,” Enders-Stevens said. “My guys have worked so hard and continue to give me a great race car, which has been a struggle at the start of this year.  I think we’ve got our hot rod back.”

The victory was Enders-Stevens’ 13th of her career and first of the season.  A test session following the Four-Wide Nationals in Charlotte two weeks ago went a long way in helping her Elite team overcome troubles with a new tire and new fuel for 2015.

Sunday, though, Enders-Stevens had to undergo her own troubles.  Flu-like symptoms, including a sore throat and fever, left her dehydrated before the race, and she took intravenous fluids before the first round.  She took another IV later in the day.

“I just really had to focus on the mental side of it,” Enders-Stevens said.  “Anybody can relate to feeling so bad you don’t even want to get out of bed.  To have to get in a race car on a 130-degree racetrack in a 15-layer firesuit certainly tests you.  I just had to be positive.

“I asked my crew chiefs (Rick and Rickie Jones) to do their best to pump me up on the radio, so we had some fun out there.  I give them the credit today.  They gave me a consistent race car.  Granted, we did win on a couple of holeshots, but that’s my job as a driver.  You don’t get sick days here.”

Enders-Stevens responded with holeshot wins in the semifinals and final.  She had a bye in the first round after Matt Hartford failed to make the call, and she then beat Jimmy Alund with a pass of 6.661 seconds at 207.27 mph to Alund’s 6.697 at 206.70 mph.

In the final Enders-Stevens and Vincent Nobile — opponents in the K&N Horsepower Challenge final on Saturday — made identical 6.674-second passes.  Enders-Stevens, though, had a .024 light, a tick quicker than Nobile’s .040.

“I don’t want to dwell on being sick,” Enders-Stevens said.  “It’s not that big a deal. Everybody gets sick. They took care of me, and we were able to get it done today and that’s all that matters.”

By Ron Lewis for JFR

By Courtney Enders
About Jay Wells 321 Articles
Jay Wells, 61, is a veteran motorsports public relations and marketing official. He spent 33 years at the track working with NASCAR, IndyCar, IMSA, and NHRA series' before retiring in 2009. He began writing for RacingJunk.com in September of 2013 covering the NHRA and NASCAR circuits with post race coverage along with feature and breaking news stories. Wells resides in Mooresville, North Carolina. Follow Wells on Twitter @ jaywells500.