The blooming of the 2018 spring season might mean the rebirth of flowers and plants, but for two very well known NHRA drivers this season also brings with it a rebirth of their winning ways. During this weekend’s NHRA SpringNationals at Royal Purple Raceway, Top Fuel driver Brittany Force and Funny Car Driver J.R. Todd returned to a place that they both hope to call home far into the 2018 season. 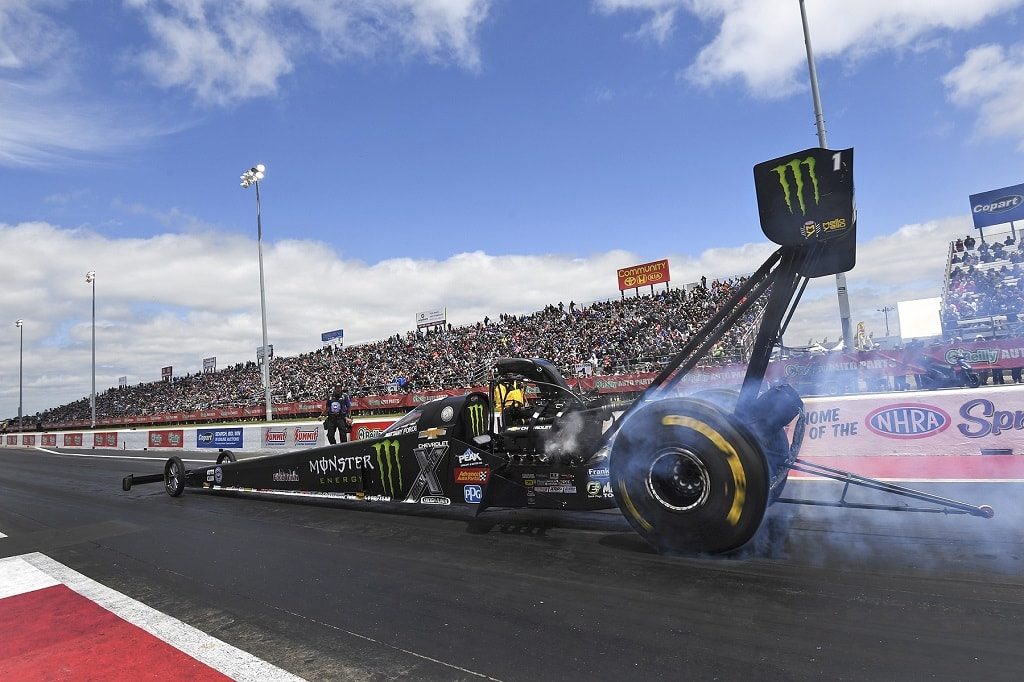 Although it was Leah Pritchett who set the Top Fuel track record during Saturday’s final qualifying session at the 31st annual NHRA SpringNationals at Royal Purple Raceway in Baytown, Texas, with a pass of 3.680-seconds at 326.00 MPH, defending Top Fuel world champion Brittany Force ultimately set the tone during Sunday’s final elimination round. For the first time since her accident in Pomona, Force found her way back to the winner’s podium after driving past Terry Haddock, Doug Kalitta and Tony Schumacher to reach her first final round of the season against Terry McMillen.

After piloting her Monster Energy dragster to a pass of 3.762-seconds at 299.46 MPH, Force powered past McMillen to become the seventh different John Force Racing driver to win at Royal Purple Raceway, which now gives all the Force family members victories at one facility.

“Although we struggled a little bit at the start of this weekend, we continued to improve and after seeing the win lights come on in the final round I knew that we were back from the bottom,” said Force. 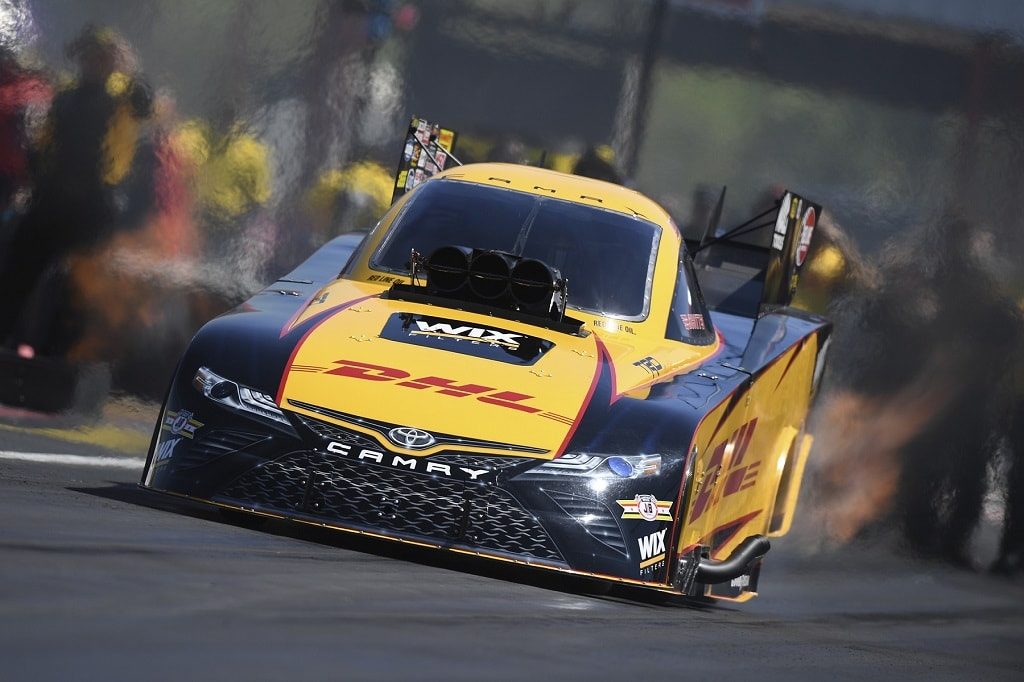 Following his recent win at the 19th annual DENSO Spark Plugs NHRA Four-Wide Nationals at The Strip at Las Vegas Motor Speedway, Kalitta Motorsports driver J.R. Todd continued his hot streak at this weekend’s NHRA SpringNationals. Despite yet another John Force Racing driver earning the No. 1 qualifier position during Saturday’s final qualifying session, the DHL driver found his way back from a tough start to defeat Tommy Johnson Jr., Jeff Diehl and Tim Wilkerson before entering Sunday’s final round against No. 1 qualifier Robert Hight.

After facing off against Hight, Todd proved that nothing would keep him from back to back wins. With a 3.955-second pass at 313.29 MPH, J.R. Todd would become the third driver in Royal Purple Raceway to have won in both Top Fuel and Funny Car, as well as the first Funny Car driver to earn back to back wins this season.

“It is so great to have this much momentum so early in the season,” said Todd. “We struggled really bad last season and we didn’t really turn around till probably the Western Swing. This is why it is nice to come out swinging for Kalitta Motorsports this season.”

Despite double wins, Todd continues to trail Jack Beckman in the point standings by 68 points going into next weekend’s NHRA Four-Wide Nationals at zMAX Dragway. 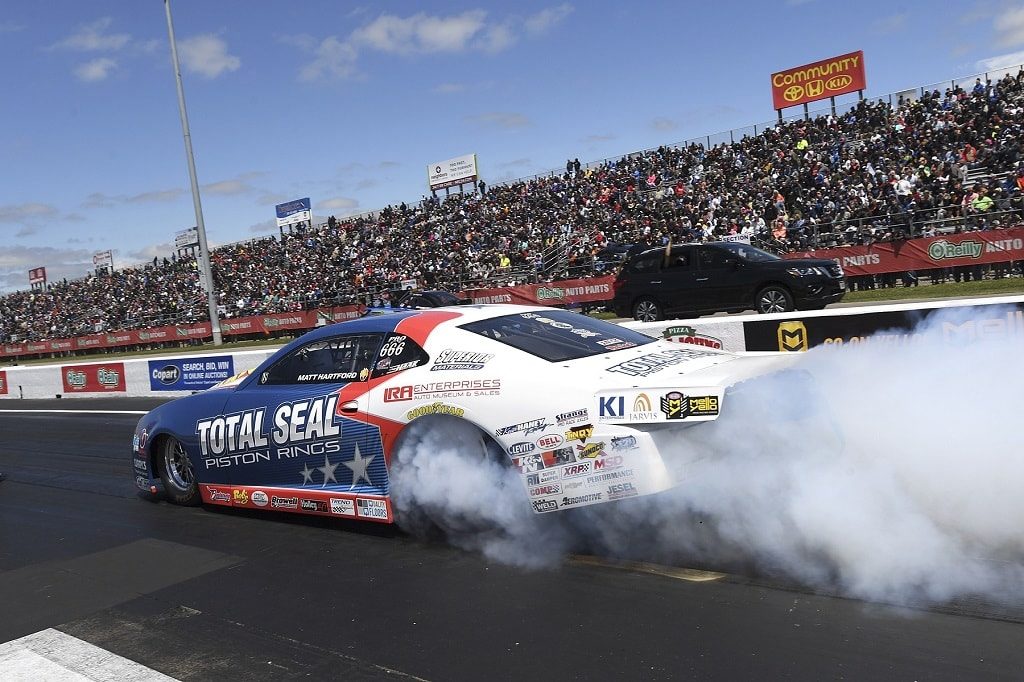 While two drivers earned yet another win, Sunday’s Pro Stock final elimination round gave 46-year-old Matt Hartford his first career win. After taking down Chris McGaha, Tanner Gray and Jeg Coughlin Jr. to enter the first final round of his career, Hartford had to take down hometown hero Erica Enders to earn his first hard-earned Wally.

Although Enders defeated No. 1 qualifier Greg Anderson to move onto the final round, Hartford’s pass of 6.552-seconds at 211.36 MPH in his Total Seal Chevrolet Camaro was enough to make this senior driver the 66th different Pro Stock driver to win in NHRA history.

“We earned this,” said Hartford. “My driving is not why we won; instead, my crew tuned the car enough for us to be able to drive around Enders at the end.”

Along with his first win, Hartford has also earned a slot among the top three drivers in the Pro Stock division going into the NHRA Four-Wide Nationals at zMAX Dragway.