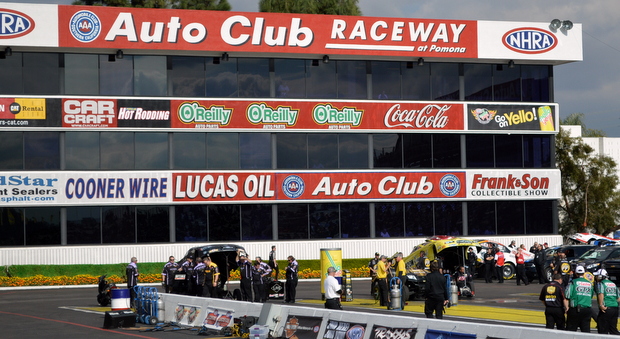 The second longest running NHRA National event, the 54th annual Circle K Winternationals, lived up to its reputation, kicking off the year with new records, new teams, and a general sense of exuberance as drivers enter the 2014 NHRA Mello Yello season.  However, it also didn’t take long for the notable names to rise to the top. 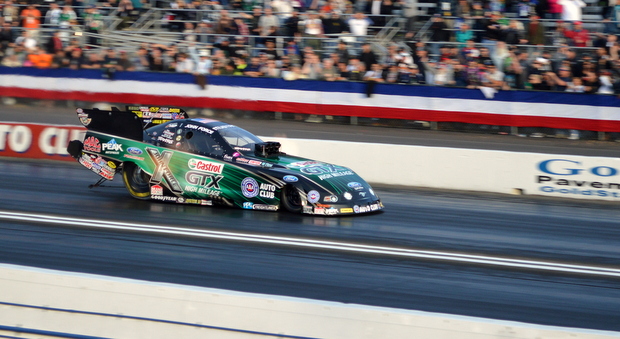 64-year old John Force continued his domination in the Funny Car category and took home a slew of records to go along with all his accolades.

Force rushed his Castrol GTX Ford Mustang to the top of the list in Friday’s qualifying round, posting an incredible 3.966 elapsed time at  324.12 mph to take his JFR team to the No. 1 spot. This offered  his team the first leg of new National ET and Speed record, since all records have to be backed up to within 1 per cent as per the NHRA rulebook.

On Sunday, the Yorba Linda, Calif. resident defeated Paul Lee, Tommy Johnson, Jr., and Bob Tasca in eliminations before a rematch with his Pomona Finals opponent, Matt Hagan.  The good-natured Force loves talking up his opponent and Hagan was no different.

Hagan is the lone driver to snap Force’s winning ways in the NHRA Auto Club Finals back in November and going into the finals in the season’s kick-off event, they met again.

The JFR flagship car showed why it was No.1 in qualifying by backing up Force’s previous quick time and on his third three-second run of the weekend, lowered the new National elapsed time record to 3.965 seconds at a speed of 323.58 mph, giving him both ends of the record and an additional 20-points for the achievement, and carving out a 50-point lead in the Funny Car points standings over Hagan.

“I get really excited racing Hagan and the ESPN announcer in the semi-round said ‘Do you see those muscles on that kid, do you think you can beat him?’ I said what is this, the WWE? We aren’t in a cage,” laughed Force, who recorded his seventh Winternationals title.

Going into the final round, the brain trust of Jimmy Prock and rest of the Castrol GTX High Mileage team put a tune-up on John’s Mustang that could’ve reversed the rotation of the earth.

“I’ve got a good race car. It is amazing and we are trying to build our sport.  We are out here trying to run good for the fans.  Jimmy Prock and the whole brain trust are working together,” said Force.  “After the final when I got out of the car on the top end, the ESPN announcer said ‘you got him (Hagan) with all his muscles’ and I said ‘this old man didn’t, Jimmy Prock flexed his muscles by ripping off that 3.96 number,’”

Hagan was disappointed not being able to offer an encore run to take down Force, but it wasn’t from a lack of trying.

“We were just pushing hard,” Hagan said after his Dodge Charger R/T went up in tire smoke in the final round.  “Force had been running 3.90s all weekend long.  We knew we had to bring our A-game.  He’s got a great hot rod right now but we’ve got a pretty good one too. It’s going to be a great season this year and I can’t wait to battle it out and turn on some more win lights.” 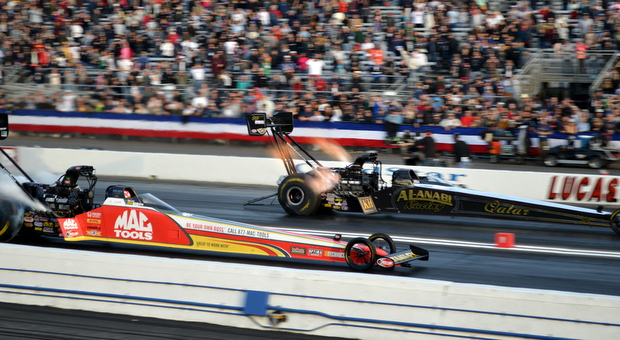 In Top Fuel, Khalid alBalooshi drove his Alan Johnson-led Al-Anabi dragster winning his third Top Fuel event of his career and first Winternationals Wally while taking down  No.1 Qualifier, Doug Kalitta in the final round.

alBalooshi, now residing in Los Angeles, has quickly adapted to his Top Fuel ride.  In the finals, he felt his dragster losing a bit of traction, but quickly reacted, keeping it straight and hitting the throttle again with full traction enabling  an off-pace time of 3.974 seconds, running a speed of 324.36 mph.  alBalooshi was the No. 7 qualifier with a time of 3.774 seconds.

“I am so excited.  There is nothing better than to leave the first race of the season with the first trophy,” grinned alBalooshi.  “Thanks to Jason (crew chief Jason McCulloch) and everybody on our team; they have been working very hard, and I thank everyone for his hard work on our car; I thank Sheikh Khalid for giving me the opportunity to drive his car; I am happy we could make him proud today.”

The three-time winner had to dispose of Tony Schumacher, his teammate, Shawn Langdon, Steve Torrence and in the finals, Kalitta.

“The Al-Anabi car had a strong day today,” said alBalooshi.  “It’s a good win, especially when you have Tony Schumacher first round, Shawn Langdon second round, and ‘Steve-O’ (Torrence), who’s been doing a good job.  Doug’s (Kalitta) car was the best car all weekend, so it made it a very big day for us to take him down in the final and get the trophy.

The Sunday victory has propelled alBalooshi atop of the Top Fuel points standings (113) with a six-point lead over Kalitta (107), and a 38-point lead over Spencer Massey (75) and Steve Torrence (75), which are tied for third on the roster. 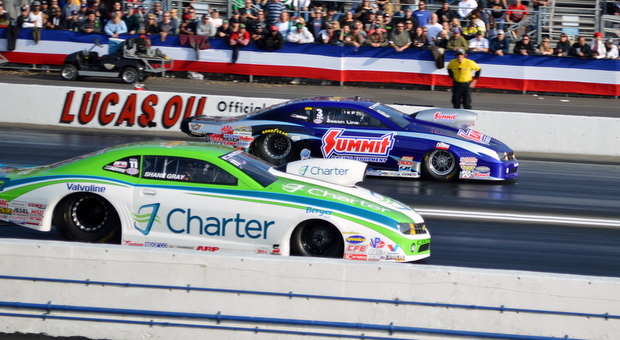 Line, of Mooresville, NC, wanted to deliver the Winternationals Wally to his best friend and Ken Black racing teammate, Greg Anderson, who underwent heart surgery and will miss probably the first six races.  Anderson was recuperating in a Charlotte hospital watching via ESPN3 on his computer.  It was the first time in both Line’s and Anderson’s career one of them was absent from the track.

“It’s a huge deal to start off the year like this, and I didn’t want to lose to an ‘ugly Dodge,’ ” joked Line.  “But in all seriousness, this is a big deal for the Summit Racing team and our Chevrolet Camaros.  We worked hard over the winter, and I think we really made some progress. The sport is crazy competitive right now, but we’re certainly off to a good start.

“The KB Racing team was great this weekend.  We all pitched in and worked together, and Jimmy Alund [who will drive Anderson’s Summit Racing Camaro for the first six events] was a great help as well. He’s a very capable guy and was certainly an asset to us this weekend, there’s no question.”

Line, tuned by crew chiefs Rob Downing and Tim Freeman, had a strong car from the start with his Summit Racing Camaro – remarkably, the same car that he crashed in testing late last season in Rockingham – and entered eliminations as the No. 3 qualifier based on a best time of 6.514-second at 212.63 mph.

Line defeated Matt Hartford, Dave Connolly, and Shane Gray before his final round matchup against the Denver, Co.-based Gaines.

The pair left the Christmas Tree quickly in arrears and Line barely outmuscled his Mopar opponent with his best run of the day – 6.526 seconds, 212.06 mph to Gaines nearly matching time of 6.533 seconds, 212.56 mph giving Line a slim .010 of a second margin of victory.

“I talked to Greg this morning, and he gave me strict instructions,” said Line, who joined the KB Racing team, a group that now owns 104 event titles, in 2004.  “When I finally get to talk to him tonight, I’m pretty sure he’ll be happy with me.  This is really cool, and I’m glad Greg is getting better.  I’m forever indebted to him for giving me the opportunity so many years ago that nobody else would have.”

The next NHRA National event will be in two weeks at the newly renovated Wild Horse Pass Motorsports Park for the CARQUEST Auto Parts Nationals in nearby Phoenix on February 21 – 23.