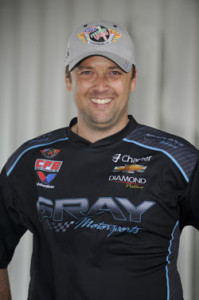 Jonathan Gray is campaigning for the NHRA’s Automobile Club of Southern California Road to the Future award signifying the rookie-of-the-year;  but with two final round appearances at Epping and Bristol in 2014,  he’s battling hard in the challenging Pro Stock division.  After 17 races, Gray is now 11th in the Mello Yello points and trails No. 10, Greg Anderson, by 32 points for the coveted entry into the Countdown to the Championship.  The Burnout chatted with Gray about his season and his thoughts going into the pivotal race over Labor Day Weekend in Indianapolis.

The Burnout:  This is your first season of NHRA racing,  and you didn’t start until the third race of the season but you have reached two finals rounds, and could be a contender for the championship. So, overall, how would you rate your season?

Gray: You know, being new at this deal and not starting at the beginning of the year and coming three races in, I think we’ve done pretty well.  I feel we have had a pretty successful year.  For me, not ever driving anything with a stick in it or anything of that nature, I have to say we’ve had a pretty good year.  I would like to finish in the Top 10 and that’s the goal.  We’ll just have to see what happens .

The Burnout: You’re 32 points out of tenth in the Pro Stock points standings, you know what you have to do, how do you think it will go at Indy?

Gray:  We have to go two more rounds than he does.  It’s a pretty tall task, but it’s possible.  I would like to take care of my own business and meet him in the first round.  That’s the only sure way to get through and that’s winning rounds.

The Burnout:  How much do you ask your dad, Johnny Gray, and brother, Shane, for advice in driving and other things that might come up?

Gray:  Only all the time.  It’s really quite often.  If something comes up that I’m not real sure of, that’s where I go.  A few races ago, I was struggling a little bit with the shift light.  It had been sitting in there that way since I’ve been driving it.  At the time, I didn’t really know anything different.  It started a trend of inconsistency.  I really couldn’t figure out what the deal was, so I went next door and got with Shane asking him “what’s going on here?”  He saw the situation and said he could improve and sure enough we moved the light around in the car a little bit.  It made all the difference in the world.  It’s those little things that most people don’t realize how much having them with me really helps.

There have been some little things along the way about driving the car: being taught to keep it straight, keep it in the groove because there’s a lot of things going on in there in a hurry.  When you’ve got the wealth of knowledge that I’ve got around me here, it’s hard not to go with Shane and ask him what I need to do.  I’m just the passenger.  That’s one big advantage that I do have.

The Burnout: You reached two final rounds in back to back weekends at Bristol and Epping and came so close to winning the race.  Was there so much happening, did your day feel like blur or could you feel the excitement building around you reaching your first final round at Bristol and then your second at Epping?  What would you do different to change the outcome?

Gray:  At Bristol, all the cards just fell right.  Then all the real good cars went out early and it just didn’t work out for me in the finals.  At Epping, it was again one of those weekends.  I had to run (Gray Racing teammate) Dave (Connolly) in the final and still just came up short.

The Burnout:  Pro Stock is the toughest competition NHRA can offer. How do you rate your competition, with the best in the business?

Gray:  Oh yeah, there’s no doubt.  I don’t care what kind of motorsports you compare it to, NHRA Pro Stock is the toughest and most competitive sport there is.  It just is.  You have got to be on your game 110 per cent or you’ll go home.   It doesn’t matter how much power you have, how good of car you have, you better be on it.

When I first got in a Pro Stock car, I didn’t know what to expect.  I had never driven anything like that ever before.  Everyone in the class has been really, really good as far as encouragement.  It’s been a good experience for me.  It’s definitely a good challenge, there’s no doubt.  It’s a tough class.  It’s, by far, the toughest thing I’ve ever done, racing-wise, anyway.

The Burnout:  As the final races approach in the schedule, your closest rookie competition appears to be Top Fuel driver Richie Crampton driving for Morgan Lucas Racing.  Even if you don’t make the Countdown, do you feel you could still win the rookie title and how would it feel?

Gray:  We still have a chance at it.  Your chances may be diminished a little if you don’t make the Top 10, I still believe we can still win it if you come up with a package in those last six races and start running well and win some races.  It would definitely elevate our status for the rookie title.

Actually, I’ve never talked with Richie.  We’ve passed by each other at the track and nodded and waved and went on.  We never have had the time to sit down and talk.

Winning it would be a big deal.  I think starting with three races in, runner up a couple of times and to be fortunate enough to win the rookie of the year award, it would be an honor, really.  Especially having a good enough record to beat a Top Fuel car.  That would tough just doing that.