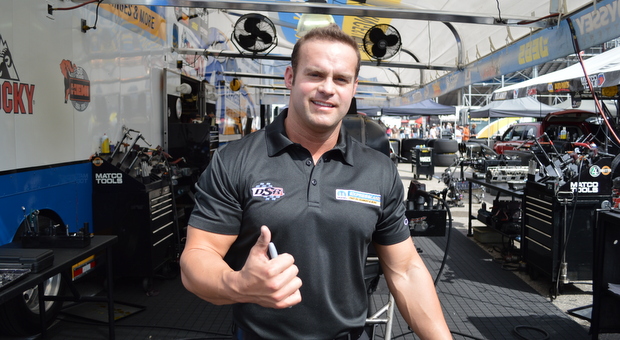 Continuing the Five Questions Series, I met with Matt Hagan, driver of the MOPAR/Rocky Boots/Peak Dodge Charger R/T Funny Car, inbetween qualifying rounds at the SummitRacing NHRA Nationals to ask him about his season so far.

Matt shares his thoughts on this year’s strategies and goals as well as a personal milestone, the opening of his new retail store, Matt Hagan Outdoors.

You had a great 2013 season, finishing second place in points. How will you be building on last year’s successes in your quest for this season’s championship?

We’re running the combo that we had last year. We just brought it right back out here to this race track and unloaded it [from the hauler], went to the top and stayed at the top so far. We still have one more qualifier to go, but the car is running really strong. You take the data that you’ve learned and acquired over the course of the entire year and apply it and keep growing it. It’s been good — the confidence is high, team moral is high. We’ve got great chemistry with the crew and I’m just looking forward to turning some win lights on tomorrow.

Aside from the championship, what other goals are you looking to achieve in 2014?

We want to win some races. We won five races last year which was class best, but I’d like to win six or seven or ten! Why not? Might as well be greedy if you’re gonna be greedy, right? Obviously, win as many races as we can, but my biggest thing is building more relationships. This is my family out here — these guys that are working on this car. I see them more than I see my family so it’s important to make sure that we all stay together over the years and keep working on these cars and everybody’s happy. The wins will come. It starts with a core group of guys and you’re nobody unless you have good people around you. That’s one of my goals this year: to keep my guys happy.

Your height and muscular build are usually a topic of conversation. As a driver, what are the advantages or disadvantages of having a larger physique?

I don’t think there’s any disadvantages, really. The more you’re in the gym, the more you’re in shape and the clearer your mind’s going to be. My lights and reaction times have been phenomenal after I started running and doing more weights. I led the class last year in reaction times so I think it all plays hand in hand — mentally fit, physically fit and just ready to go racing. Lean and mean.

Do you have any pre-race rituals that you perform to help you get psyched up?

What do you like to do when you’re not racing Funny Cars?

I like to farm. I just opened up an outdoor store at home called Matt Hagan Outdoors. We’re farming a little over 1,100 acres and building a brand new house. So between racing, farming, new store and the family, I’m pretty covered up.

Matt Hagan is the 2011 NHRA Funny Car Champion and led the Funny Car class in 2013 for highest winning percentage (67.8%, 40-19) in championship elimination rounds.

Keep up with Matt’s adventures on the official Don Schumacher Racing website and on his Facebook page.