Recently we got to interview Eric Burch the president of P1 Groupe, a company that specializes in brokering partnerships with drivers and race teams as well as assisting teams in asset sales.

1. How did you get started in the racing industry?

Through a friend from high school actually. His family purchased a Dodge Viper GTS-R that ran the 1998 24 hours of Le Mans. He and I would spend evenings after work tearing down and rebuilding the Viper for the 1999 24 hours of Daytona. In promoting that effort I was hired as Director of Sales for Justin Bell’s GT Experience in Palm Beach, which I served in that capacity from 1999-2001. In 2000 one of our clients hired me as Team Manager of a start up program, and ended up running Dodge Viper GTS-R’s in the American Le Mans Series from 2001-2004. Myself and two partners along with the rock band KoRn ran a Grand Am Cup program with a Ford Mustang in the GS class in ’05. I started P1 Groupe in 2006, initially to manage up-and-coming drivers before transitioning in 2014 to driver placement and asset sales.

2. What services does P1 offer?

Sportscar racing is so dependent on funding from outside sources, whether it be from young up-and-coming hot shoes trying to “pay their dues” in search of Pro drives, or the classic gentleman driver. For funded drivers, we offer placement options in top championships around the world. For professional teams at the IMSA, WEC, ELMS and SRO levels we assist in sourcing the very best funded drivers. Additionally for both drivers and teams, we offer brokerage of asset sales. Be it race cars, race haulers, pit equipment, etc., we know the market and advise clients on values of their assets, promote and market those assets, and negotiate with potential buyers, and work with both seller/buyer through the Bill of Sale/payment and up until unit is delivered. We also are happy to provide whatever support we can for those purchasing new race cars for example that either don’t know much about the car or if they’re looking for a team that can assist them in supporting their on track endeavors with their new asset. This is where RacingJunk.com has been a great resource to P1 Groupe, we’re able to generate great leads and sales through your site. 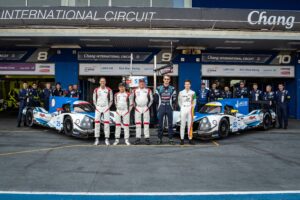 First and foremost trust in what we’re bringing to the table for them. In order to get the most of the driver, they have to be able to get the most out of the relationship with us. We always try to go the extra mile for them. But it works both ways, if a driver commits to something, we have high expectations of them as well. Even if they’re paying for the opportunity to drive a racecar, they still have a job to do, and how they go about it effects the teams ability to succeed. Since we work with the up-and-coming driver as well as the gentleman driver that’s really either fulfilling a lifelong bucket list item, or looking for that next pro drive to open up, they must have realistic expectations, and trust the process.

Our experience and the relationships we’ve spent 20+ years building in the sport. I’ve managed professional programs (and still do) and managed drivers careers, so we have relationships on both sides of the relationship. Our network is worldwide, and we have great long-lasting relationships that says more about our company than anything else. If we we’re good at what we do, we would still be doing it at a high level after all these years.

5. What is your favorite thing to go fast in?

As you can imagine, I’ve been fortunate enough to have had the opportunity to drive many great cars. The very first race car I was in was a 1966 GT40 (as a passenger), that’s what got me hooked on the adrenaline of the sport, and for good reason. Personally I own a Mercedes C450 AMG with several RENNtech upgrades that’s just an amazing car, and also an Aston Martin V8 Vantage. Both are a blast to drive, but if I had to pick one, probably the Ferrari F430. I haven’t driven the 458 or 488 yet, but the 430 is just such a smooth car in its performance. There’s nothing like the sound of a Ferrari at full song to get you in race mode!