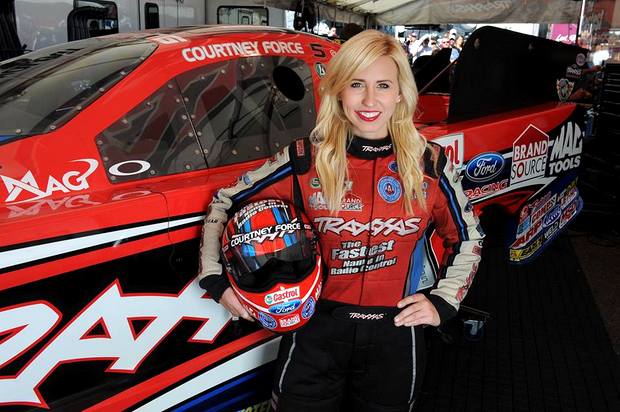 While we were racing our 1/8 scale remote controlled Traxxas Funny Cars, Courtney Force and her crew were out practicing with the real thing at Palm Beach International Raceway during the PRO Winter Warm-up. Pre-season testing can be pretty hectic, especially since quality track time is so precious, so we’re thrilled that Courtney took a few moments to answer some questions exclusively for The Burnout.

What are some of your goals for the 2014 season?

For the 2014 season, our Traxxas Ford Mustang team is definitely looking to get some more wins under our belt, but really we want to keep our car running consistent throughout the entire season. I think the most important thing is to lock ourselves into the Countdown to the Championship and stay consistent for those last seven races so we can work towards our goal of winning a championship. You want to do well all season long, but you have to keep your car and team consistent in the Countdown because that’s when it all really matters. We’re going to go after some wins and some No. 1 qualifiers and hopefully just improve from last season.

How have you been training/staying in shape during the off-season?

I enjoyed the off season. I took a little bit of a break from training to enjoy the holidays, but now I’m getting back on track, hitting the gym and getting ready for the new season. Once it starts back up after testing I’m going to be training hard back home with my trainer, Pierre. I’ll be hitting the gym each week and getting back into that same routine I had last year.

What words of encouragement would you give to a young female driver aspiring for a spot in the NHRA?

I would tell a young female driver to stick to your goals. The NHRA is a fun sport to be involved in. It’s great being a driver out here. There aren’t enough female drivers and we want more of them. Just stick to your guns and work hard. It takes a lot of time and it’s not going to happen overnight, so do what you can and get out there. I started off in the sportsman ranks and worked my way up, talking to sponsors along the way and got deals together. It takes a lot of hard work and dedication. It really is a 24-hour/7-day-a-week job. You really have to know your heart is in it, you’re passionate about it and if you work hard you can reach your goals.

Do you have any funny or interesting pre-race rituals?

I have to have a routine of putting my left boot and glove on first before my right, and when I’m strapped in the car I listen to a playlist of music. It’s always the same playlist every time, but it gets me pumped up and excited for my run. It kind of blocks out all the noise around me, lets me focus on myself and calms my nerves. That’s kind of been my biggest ritual going into a race weekend. I just kind of like to have fun with it and not take rituals too seriously.

When we polled our readers, the most popular question for you was “Will you marry me?” Do you get marriage proposals often from fans? What are some of the creative ways you’ve come up with to turn down playful marriage proposals?

I have gotten quite a few proposals. Usually they are joking or it’s just in good fun. It is pretty funny, but it gets embarrassing when they ask you a question like that. The best response I have is to tell them they have to ask my dad first. All of the sudden they aren’t so eager to ask me or him!

Check out Courtney, hard at work, at the PRO Winter Warm-up at Palm Beach International Raceway.