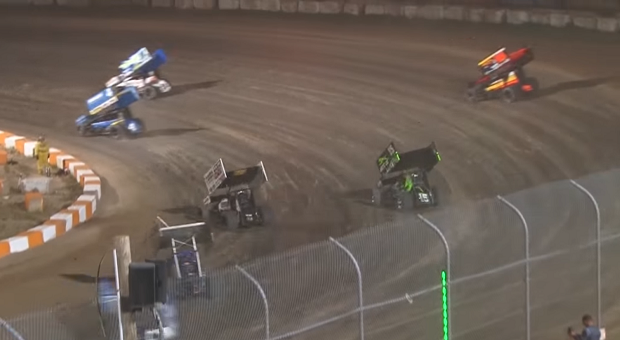 Logan Schuchart hunted down Donny Schatz in heavy lapped traffic, then dominated the latter half of the Six Nations Showdown at Ohsweken Speedway for his fourth World of Outlaws Craftsman Sprint Car Series win of 2017 Tuesday night. The victory provided a confidence boost for Schuchart and his Shark Racing team, who had been struggling of late.

The slick Ohsweken surface fit the taste of the Hanover, Pa. native in this season’s Outlaws-only visit to Canada.

“I love these type of racetracks, not just because we ran well on it tonight. I love slick racetracks,” Schuchart said in Victory Lane. “I love when you have to drive the car straight and smooth. I feel like it makes it fun. Obviously if you’re not running good it’s not fun, but if you can glide around the racetrack, be smooth and have forward drive, it’s fun.”

All these ingredients were present at Ohsweken. Schatz grabbed an early lead from the pole and pulled away from the majority of the field, and Schuchart was the only driver able to keep pace. The duo wandered into heavy lapped traffic by lap nine, and when Schatz had to give up his preferred line on the bottom to move past a slower car, Schuchart found room on the bottom of turn two and sped down the backstretch to take the lead.

“I was having trouble catching Donny when we were in an open run,” Schuchart admitted. “It wasn’t until we got to lapped traffic, I felt like, that some lapped cars made him go where he didn’t want to. I could just move around a little bit more than he could and go through the middle. When some lapped cars took his line away, I just felt like I was able to get the forward drive off the corners to get by him.”

One lap after Schuchart took the lead, the caution flag waved for Sheldon Haudenschild, who suffered a flat right-rear tire. He made the repairs in the work area and returned to the rear of the field. Schuchart held the point on the lap nine restart. Meanwhile, Greg Wilson and Kyle Larson battled tooth and nail for the third spot.

Schuchart led the top-five into traffic again on lap 16 of the 30-lap main event, but was able to run the bottom the lane the whole time to continue pulling away from Schatz. His advantage with 10 laps to go was 2.6 seconds but grew each lap until he achieved the eventual 5.984-second margin of victory.

Schatz was disappointed that he wasn’t able to capitalize on his pole starting position. His runner-up finish was his 40th top-five finish of the season.

“We got beat,” Schatz stated bluntly. “Logan was really good. He could go all over. Obviously, we got to traffic and you have to move around. We did that a little bit and he found the better groove. Those guys rolled pretty good and I couldn’t stay down there very well. I had to roll the middle and do what I could. These guys did a great job, Logan was just that good tonight.”

Schuchart was ecstatic to score his fourth Outlaw win of the season and beat the current Series point leader to achieve the feat.

Wilson rounded out the podium finishers after holding off Kyle Larson in the second half of the race. It was Wilson’s fifth top-five finish of the season on a surface he raved about in his post-race interview.

“We’ve been struggling pretty bad lately, so I can’t thank the folks at Hercules Tires, Ohio Logistics, DNC Hydraulics, Gear Alloy and Weikel Sportswear for staying with us,” Wilson said. “This is always an amazing show. (Track Owner) Glenn (Styres) and the whole crew gave us an excellent racetrack. It’s fun. I wish some other tracks in the country would take a look at this. I realize we’re not going 100mph, but there’s racing all over the racetrack and that’s what it’s about.”

Larson settled for a fourth-place finish and 19-year-old Dylan Westbrook, who was making his first career Outlaw start in his first night with a 410ci motor, rounded out the top-five after starting 16th. Jacob Allen was the KSE Hard Charger award winner after he advanced 13 positions from 24th to 11th.

Brad Sweet was the night’s fast qualifier with a lap of 12.280 seconds. Sweet, Schuchart, Larson and Wilson all won heat races in some of the most thrilling qualifying action all season. Schatz won the Craftsman Club Dash from the pole, but had to take the lead back from Brent Marks midway through the race to gain the pole. Kraig Kinser came out on top of a three-car battle for the lead with Jared Zimbardi and Steve Lyons to win the Last Chance Showdown.

The World of Outlaws Craftsman Sprint Car Series now has two days off before returning to competition for the Battle of Michigan at Hartford Speedway in Hartford, MI on Friday, July 28. The Outlaws will see the track’s new 3/8-mile configuration for the first time. For additional event information, including advanced reserved ticket purchases, visit www.slspromotions.com.