Fireworks flew as things heated up for the warriors of NASCAR on 4th of July weekend at Daytona International Speedway. 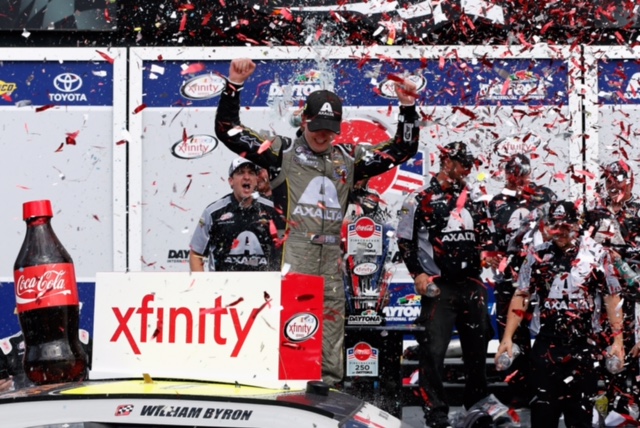 Kicking off the holiday weekend with a race that ended more than 21 hours after it started resulted in a second XFINITY Series win in two weeks for Jr. Motorsports driver William Byron. The Coca-Cola Firecracker 250, which commenced with its first 11 laps on Friday night, was delayed by a storm system that moved through the area, forcing both drivers and fans to retreat and return to the track on Saturday for a full day of racing.

Led by the No. 48 of pole sitter Brennan Poole, the 40-car-field commenced with racing early on Saturday, but was once again delayed for another 2.5 hours for more lightning and rain. Finally, racing resumed to give Blake Koch the Stage 1 win. Despite this win, Koch would fall victim to the crash fest that often ensues at the 2.5-mile superspeedway after a six-car pile-up would end the day early for the rookie driver on Lap 49.

This gave pole-sitter Elliott Sadler the opportunity to take over the lead and the Stage 2 win. As the laps wound down and it appeared that Sadler would take his domination to a win, late-race action at the front of the field gave Monster Energy NASCAR Cup Series driver Joey Logano a chance to lead the way. That is, until a late race push sent Logano into the infield grass.

This would give 19-year-old Byron a chance to take the lead on Lap 98 and, ultimately, the win on overtime lap 104.

“I just wanted to give Joey a hard race, but I had no intentions of sending him into the infield. I am so excited to give this team another win though,” said Byron.

Upcoming for the NASCAR XFINITY Series is a quick turnaround to Kentucky Speedway, site of next week’s NASCAR tripleheader. 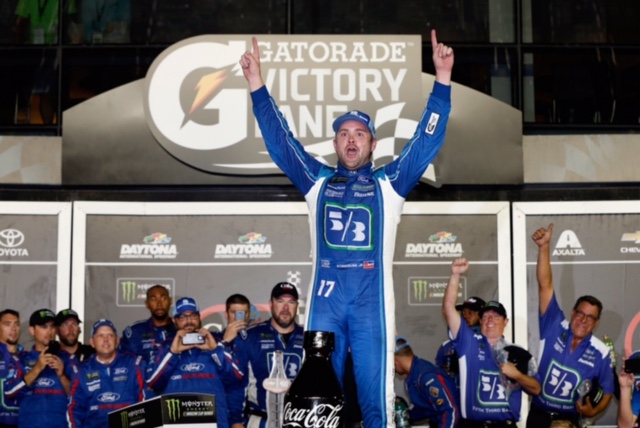 Byron wasn’t the only NASCAR Young Gun to grab his second major win of the 2017 season. While many had their hopes set on pole-sitter Dale Earnhardt, Jr., in his final run at the NASCAR track that made his family famous, these wishes would fall flat and give rookie Monster Energy NASCAR Cup Series driver Ricky Stenhouse, Jr. his second win of the season.

While Earnhardt, Jr. dominated the start of this race, his right front tire began losing air on Lap 52 and unintentional contact from Menard nudged the No. 88 into the outside wall near the entrance to Turn 1, obliterating the top third of the car number on the right side.

A succession of additional multicar wrecks kept Earnhardt at the back of the pack and also crippled and eliminated more than a handful of contenders. The race-record 14 cautions, including one that sent the No. 42 of Kyle Larson airborne, would give Stenhouse exactly what he needed to pull-off his second masterful victory of the 2017 season.

“This is awesome! I’ve been coming here since 2008,” he said. “I came in 2006 one time with Bobby Hamilton Jr., and it’s cool to put it in Victory Lane and get our second win this year. I love it! Thank you to the fans for coming out here. Everyone at NASCAR. What a great weekend. America! 1776! We are the champs! … This validates what we did at Talladega.”

As these drivers enjoy the 4th of July fireworks, they aren’t soon to forget the real fireworks that once again made history at Daytona. Stay tuned to RacingJunk.com for all the latest NASCAR news.