After an explosive weekend at the 21st annual JEGS Route 66 NHRA Nationals, both Robert Hight and Jeg Coughlin Jr. snagged their first wins of the 2018 season, while Top Fuel driver Clay Millican raced his way to his second straight victory. While these drivers had reason to celebrate, both John Force and Tommy Johnson, Jr. were left wondering what happened after surviving horrific crashes at Route 66 Raceway. 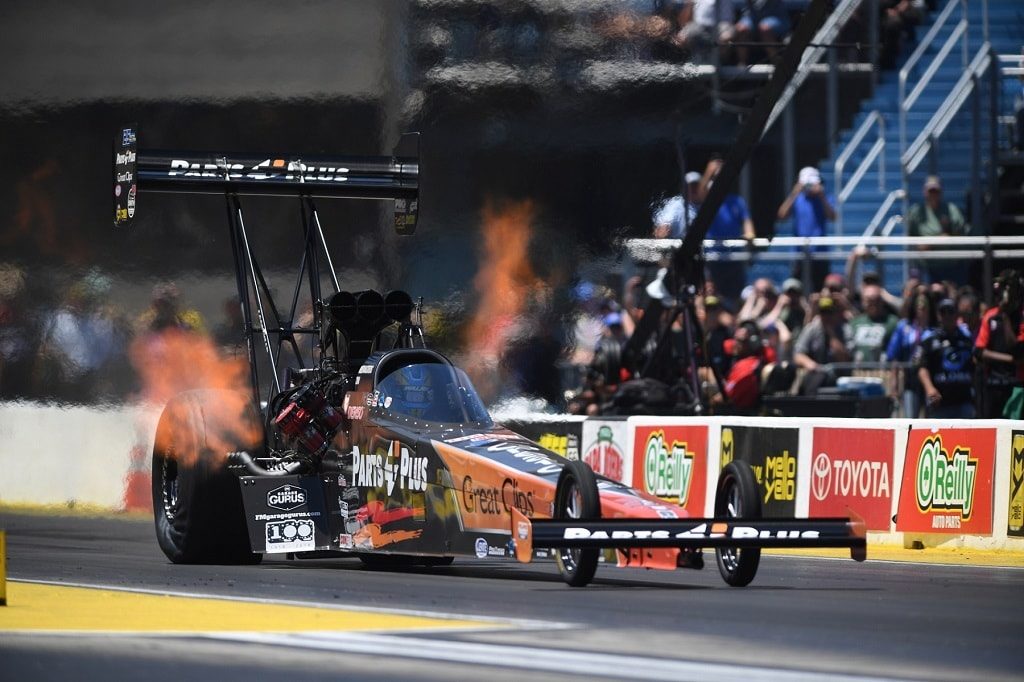 Despite Steve Torrence earning his first top qualifying spot of the season after setting both ends of the track record with a blistering run of 3.677-seconds at 333.58 MPH in his Capco Contractors dragster, it was Millican who drove his way to his first event win of the season following Sunday’s final elimination round. After defeating Pat Dakin, Scott Palmer and Doug Kalitta, the defending event winner would face Don Schumacher Racing’s girl on fire – Leah Pritchett – in Sunday’s final round. After piloting his Parts Plus/Great Clips dragster to 3.894-second pass at 289.32 MPH, Millican took down Pritchett to earn his second Wally of the 2018 season at the track where the six-time World Champion made his first career NHRA Top Fuel start.

“This place is really special, and my team gave me such a good car here,” said Millican. “Although it was not necessarily my best weekend, it was certainly pretty cool to have the team pull together and just keep turning those win lights on.”

With his second straight win, Millican moved to second in points behind No. 1 qualifier Torrence going into next weekend’s event at Virginia Motorsports Park.

While the Funny Car division was marred by explosions suffered by John Force during Saturday’s qualifying session, as well as Tommy Johnson, Jr. in Sunday’s first round of final eliminations, it was the defending Funny Car world champion who made headlines this weekend. After driving past Cruz Pedregon, points leader Courtney Force and Bob Tasca III to reach his fourth final round of the year, John Force Racing driver Robert Hight proved that he was the driver to watch at Route 66 Raceway. 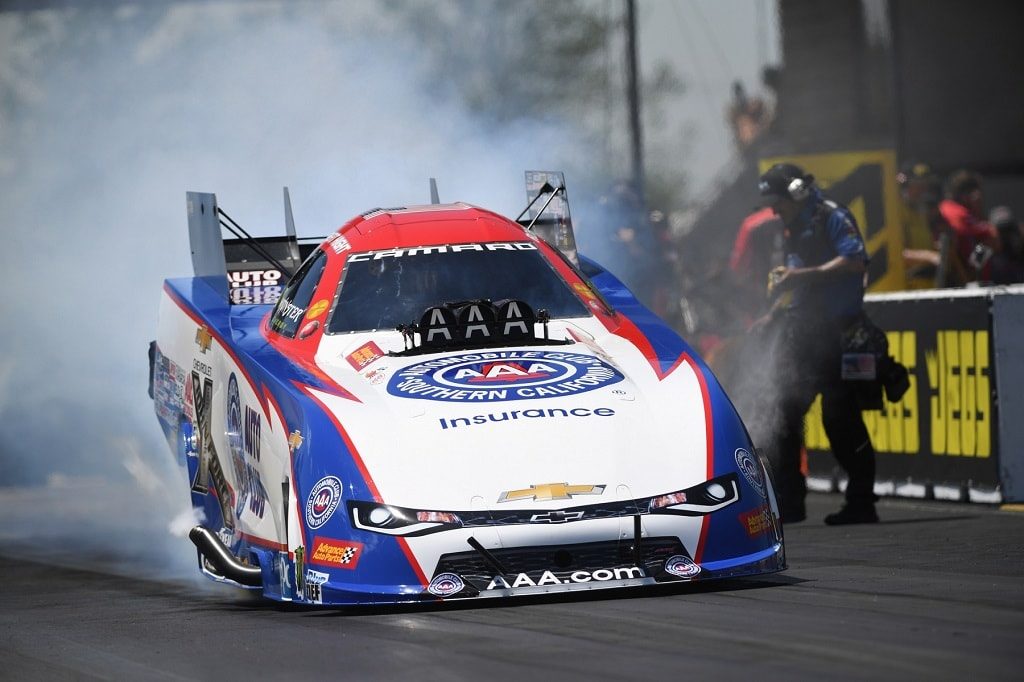 Although he would have to take on 2016 world champion Ron Capps in Sunday’s final round, Hight’s astonishing final 4.073-second pass, at 310.63 MPH, handed the Auto Club Chevrolet Camaro SS driver his first win of the 2018 season.

“It was a great weekend,” said Hight. “I always thought Chicago might have my number and this is my 14th time here, but we finally got it done today and that is HUGE. As a driver, you want to win at every venue you go to, but there is no better place than Chicago.”

Regardless of this long-awaited win, Courtney Force maintained her points lead over second-place Jack Beckman, while Hight moved to third. 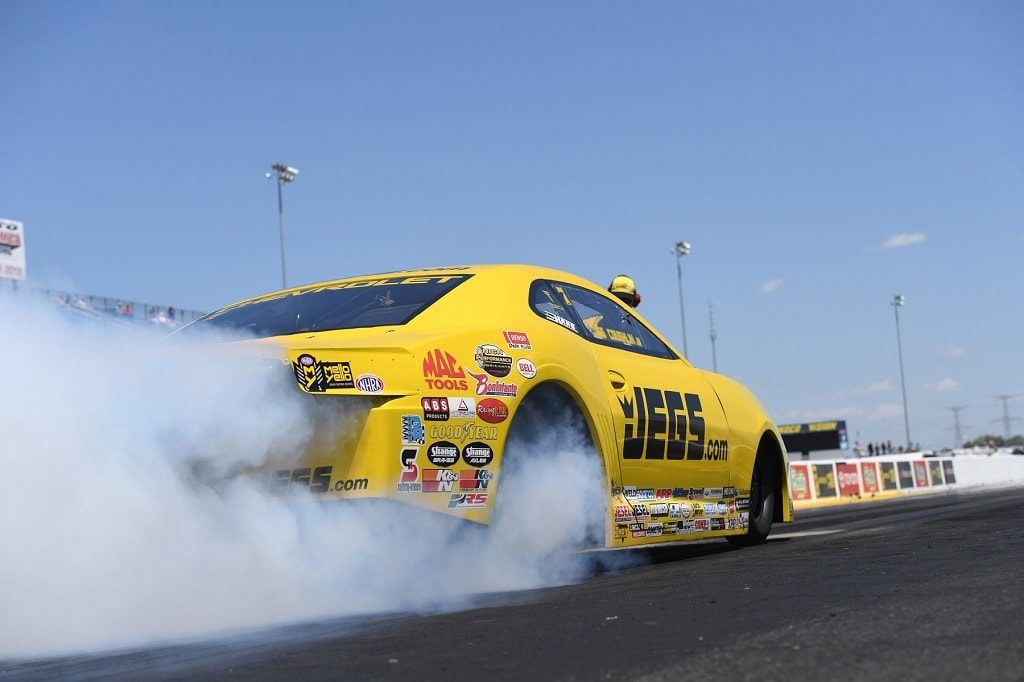 Hight wasn’t the only driver to earn his first victory at Route 66 Raceway. Although a five-time world champion, Jeg Coughlin, Jr. had gone 74 races since his last victory, the curse was broken during Route 66 NHRA Nationals final elimination round.

After defeating Alex Laughlin, Matt Hartford and Tanner Gray, Coughlin grabbed his 59th career victory and first since 2014 after going 6.574-seconds at 210.67 MPH in his JEGS.com/Elite Performance Chevrolet Camaro to beat No. 1 qualifier Greg Anderson in Sunday’s final round.

“We have been fortunate enough to visit the winner’s circle quite a bit over the years and Sunday is one of those days I will not forget,” said Coughlin. “I have an unbelievable team and I was aggressive enough to have low E.T. four rounds in a row and eventually pick up the win.”

Thanks to this win, Coughlin jumped to 10th in points as he heads to Virginia Motorsports Park.

The Mello Yello Drag Racing Series continues at the NHRA Virginia Nationals at Virginia Motorsports Park (June 8-10) in Richmond, VA. Stay tuned to RacingJunk.com for all your NHRA coverage!