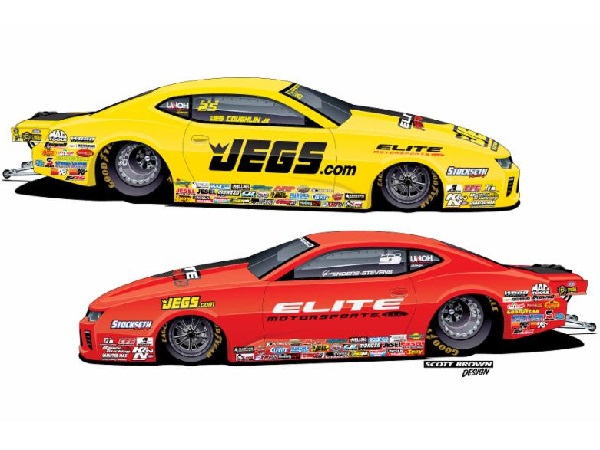 Jeg Coughlin Jr. and Erica Enders, multi-time drag racing world champions, will drive Chevrolet Camaros in the 2017 Mello Yello Drag Racing Series. This decision, announced by Elite Motorsports team owner Richard Freeman on Dec. 8 at the PRI show, was expected – Enders won the 2014 and 2015 titles for Elite Motorsports behind the wheel of a Chevy, and Coughlin took four of his five Pro Stock championships (plus his 1992 Super Gas world title) in a Chevrolet as well.
“It comes down to what works best for us,” Freeman said. “My brothers and I have just about always been GM guys. Our engines builders, Nick Ferri and Jake Hairston, have had their best success with GM motors. Our crew chiefs Rick Jones, Mark Ingersoll and Brian Self are very comfortable with Chevrolets. It’s a natural fit for us.
“We want to get back to winning races and contending for championships, and we feel Chevrolet gives us the best chance to do that at this point in time. We all know Pro Stock races come down to thousandths of seconds, and as tough as the competition is out there, you can’t give an inch.”
Crew chief Rick Jones and his son Rickie tuned Enders’ Chevrolets in 2014 and 2015, helping Elite Motorsports earn a total of fifteen victories. Coughlin, won 72 of his impressive 76 national event trophies on GM power.

“The Camaro is a great car, and one I’m very comfortable with as a driver,” Coughlin said. “Rick and Rickie build awesome racecars, and getting the latest and greatest one out of their shop makes me feel like a kid at Christmas. I can’t wait to see this yellow and black JEGS.com/Elite Camaro on the racetrack.

“I know we’re all anxious to get back out there and prove ourselves. Drag racers are most certainly graded by their last event and we want to get back to the top of the class once again, where we feel like we belong. There’s a mountain of experience at Elite Motorsports, and I know we’re in for a big year ahead.”
Vincent Nobile, returning to the team with his Mountain View Chevrolet, rounds out the three Elite Motorsports drivers most likely to contend on the racetrack this season.
“The dream scenario is one of us is in the winner’s circle at every race,” said Enders. “The KB Racing team dominated the field with their three cars this last season and we did a pretty good job ourselves in ’14 and ’15, so we know it can be done.
“As Jeg said, our guys are really hungry to win again. I believe the move back to Chevrolet is by far the best one we could have made, and we plan to show everyone that beginning in February in Pomona.”