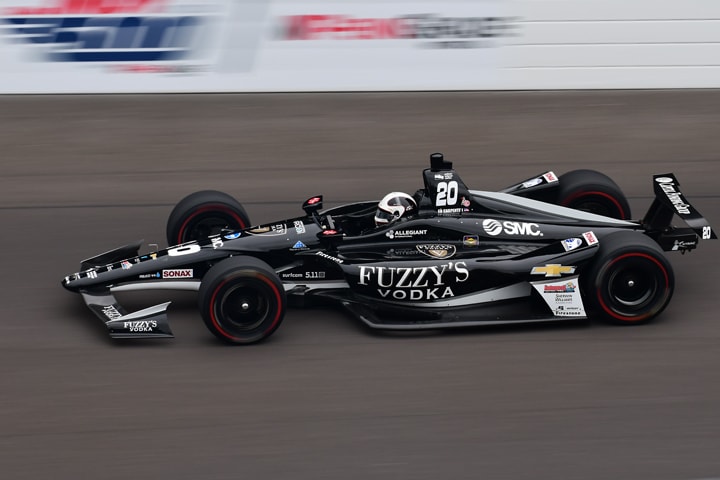 The Indianapolis Motor Speedway is a place of worship for all of us that love motorsports. Hosting the 102nd Indianapolis 500 Mile Race this coming Sunday, May 27, IMS is playing no favorites. Or is it? It’s often said that the Speedway owes this one or that one favors; in fact it does not.

Verizon IndyCar Series’ rules for qualifying the fastest 33 drivers are, at times inscrutable. With 35 cars and drivers vying for coveted grid spots in the Greatest Spectacle in Racing, bumping returned to the equation on qualifying weekend. INDYCAR used Saturday to securing a place in the race using multiple attempts and allowed each driver but a single opportunity to stake positions in the field on Sunday, qualifying from Saturday’s 33rd spot to a battle for the first three rows (Fast Nine Shootout).

Saturday’s activities, wherein drivers could take as many opportunities to qualify as they needed – after using the first run as a benchmark – saw some favorites fall by the wayside. It was a truly strange day, with dual stoppages for moisture, when drivers and cars that had been turning exceptional laps during Tuesday-Friday practice were absolutely nowhere when it mattered.

This writer could almost envision Heidi Klum on “Project Runway” stating, “One day you’re in; the next you’re out.” Who could have imagined 2016 pole sitter James Hinchcliffe having to sit this race on the sidelines? Who would have expected Andretti Autosport, winner of three of the past four 500s to be sitting out the Fast Nine shootout and mired midfield – or worse with 2016 race winner Alexander Rossi falling from 10th on Saturday to 32nd on Sunday?

It was expected that Team Penske’s four entries, for reigning INDYCAR titleholder Josef Newgarden, 2016 champ Simon Pagenaud, 2014 champion Will Power and three-time Indy 500 winner Helio Castroneves would be quick. Indeed they were, ending Sunday’s final qualifying in second (Pagenaud), third for Power and Newgarden in fourth place. Castroneves, who had been quickest on Saturday and, therefore, earned the right to be the final qualifier, fell all the way to eighth place after 10 miles around the 2.5-mile oval.

Indeed that quartet made the Fast Nine shootout in their Chevrolet-powered Indy cars. They were joined by the three-car Chevy entry from Ed Carpenter Racing of Carpenter, full-season teammate Spencer Pigot and Danica Patrick, the latter making a return to the Speedway to wrap up her racing career. Carpenter, the penultimate qualifier after being in second place at the close of Saturday time trials, was the sole driver to take a lap of 230mph and earned pole with four laps averaging 229.618mph. 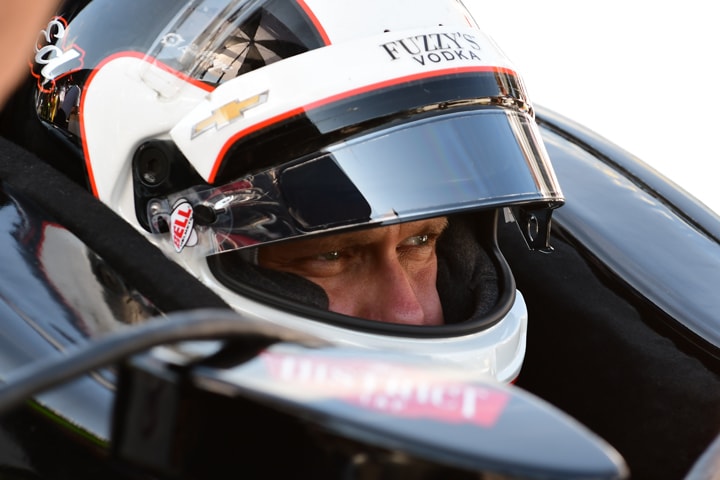 Pigot, who runs the full season for ECR while the team owner solely races on ovals, is in his third INDYCAR season, his first full-time. There was little warning he’d be this good at the Speedway, qualifying sixth in front of Patrick, who had her customary scowl for the first couple of practice days but settled into the challenge of, once again driving without the aid of power steering and piloting one of these fast, fragile bullets.

There were only two Honda-powered cars in the nine-missile shootout: Sebastien Bourdais, easily on his way to pole position last year before his massive accident, qualified a career-best fifth for his Dale Coyne Racing with Vasser Sullivan team. Bourdais’ teammate, rookie Zachary Clayman De Melo earned 13th place in an event he was not supposed to be racing until a sports car accident sidelined intended driver Pietro Fittipaldi.

Returning to this oval after a terrifying accident in last year’s (in which he was uninjured), Scott Dixon earned the ninth-best qualifying speed in the shootout with his Honda-powered Chip Ganassi Racing entry. He was still slower than the 10th and 11th-placed cars from Chevy-powered A.J. Foyt Racing, driven throughout this season by two Brazilians: veteran Tony Kanaan and rookie Matheus Leist. But because Dixon qualified for the Fast Nine shootout by the end of Saturday afternoon qualifying, he gets P9 outside the third row of the grid.

Indianapolis Motor Speedway is a living, breathing entity. Not confined to being walls, seats, tarmac surrounded by a golf course, garages and grassland, IMS doles out its favors and extracts its share of horrors without regard for which individuals and teams reap the benefits or cope with the track’s dish of difficulties.

The new UAK18 aero kit, winner of this year’s Louis Schwitzer Award from the Indiana section of the Society of Automotive Engineers (SAE), has turned out to be a boon to some teams and a terror to others. Consider Team Penske’s qualifying in 2017 with the Chevrolet aero kit: ninth, 18th, 19th, 22nd and 23rd to their Sunday assumption of second, third, fourth and eighth. Look, too, at Foyt’s rise from 24th, 26th and 32nd in 2017 to 10th, 11th and 19th (James Davison, P33 on Saturday).

Is it the aero kit that has felled Honda’s Andretti Autosport, this year a six-car squad, from third, fourth, fifth, eighth, 10th and 27th in 2017 to 12th, 14th, 21st, 23rd, 25th and 32nd in 2018? Rahal Letterman Lanigan Racing, very quick during practice will line up 16th with 2017 Indy 500 winner Takuma Sato, 26th with Oriol Servia and 30th with Graham Rahal, quickest in practice on Thursday and nowhere in qualifying.

The roller-coaster ride for Canadian James Hinchcliffe resulted in the Canadian eliminated from running the 500, and while in many cases teams have chosen to purchase a ride from an already-qualified machine, neither Hinchcliffe’s Schmidt Peterson Motorsports team nor Pippa Mann’s Dale Coyne Racing squad appear ready to do just that for the 35th and 34th qualifiers, respectively. This even though Hinchcliffe currently holds fifth place points in the season-long championship chase; Indy pays double points, as does the season finale at Sonoma.

Of course, whatever happens in Monday’s 3.5 hours of essential practice will tell the tale of that tape. An incident like Hinchcliffe’s 2015 death-defying accident could change the complexion of this 102nd Indy 500. At any rate, it’s obvious the new UAK18, along with the plethora of excellent strategists in the garage area, has helped dictate who sits where on this 33-car grid.

Qualifying, for the third time in six years belonged to Ed Carpenter, giving the week leading up to the race a happy, local vibe. Not many have earned pole here three times; Carpenter built a team that has a handle on this track and has understood the nuances of the new aero kit – at this track. That the former sprint car racer has a feel for his hometown circuit is a given; Carpenter has made a point of excelling at Indy – at least in time trials.

Will 2018 be Ed Carpenter’s breakout and winning year at Indy? Fewer than a dozen drivers have earned three pole positions at this vaunted race, but Carpenter’s objective is to drink milk next Sunday and kiss the bricks at start/finish. His best finish is 11th last year and the goal is still a ways off.

“We certainly have a car that’s fast enough to run up front, and the way’s it’s been driving all week, I feel like we have a good enough handling car on long runs to be in a good position to be a factor, if we can go out and execute on a sound strategy,” he said. Unfortunately for Ed Carpenter, 32 other drivers have the same idea. 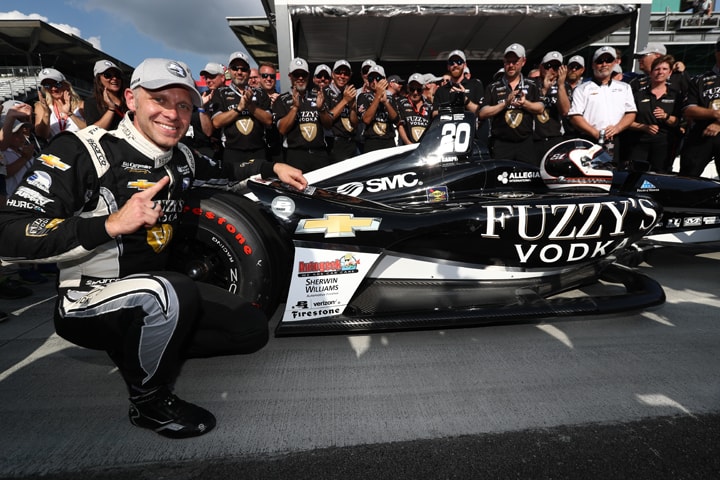 About Anne Proffit 562 Articles
Anne Proffit traces her love of racing - in particular drag racing - to her childhood days in Philadelphia, where Atco Dragway, Englishtown and Maple Grove Raceway were destinations just made for her. As a diversion, she was the first editor of IMSA’s Arrow newsletter, and now writes about and photographs sports cars, Indy cars, Formula 1, MotoGP, NASCAR, Formula Drift, Red Bull Global Rallycross - in addition to her first love of NHRA drag racing. A specialty is a particular admiration for the people that build and tune drag racing engines.