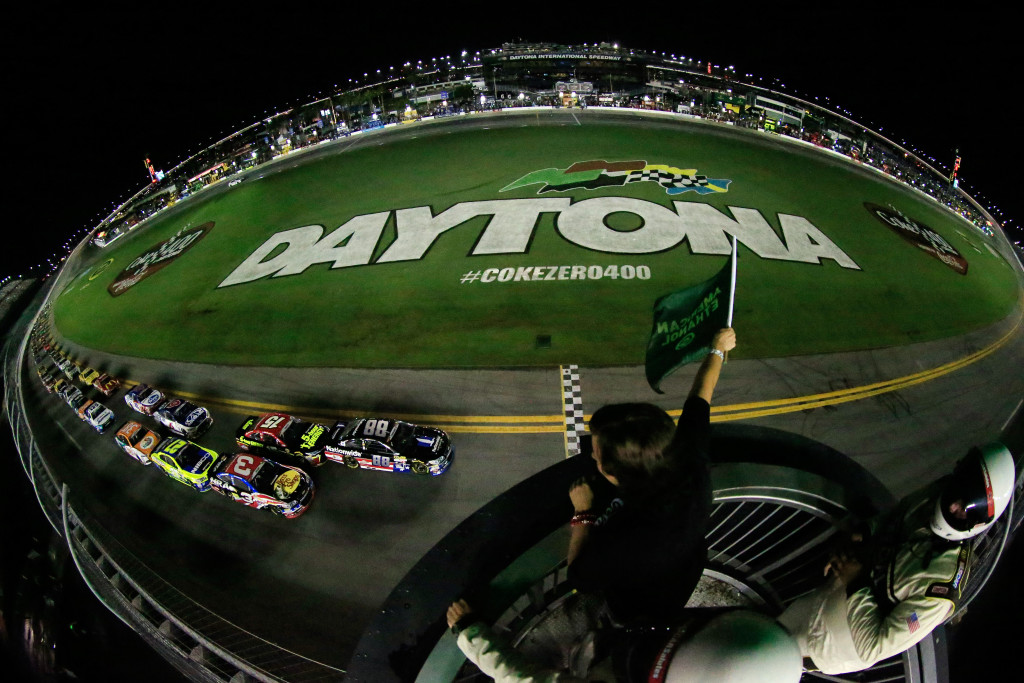 Right after the race was officially over, another major crash occurred behind Earnhardt as Denny Hamlin was spun from behind, causing Austin Dillon’s Chevy to go airborne, slamming into the 22-foot tall catch fence in a violent crash.

“That scared the hell out of me, I’ll be honest with you,” said Earnhardt.  “I saw the whole thing happen.  You’re looking in your mirror the whole last lap and saw Denny get turned.  That’s kind of how it started.  That was terrifying to watch.  You know a wreck like that’s got such a high potential for someone to get injured.  You don’t want to see that happen.

“It was real frightening.  I mean, you’re just on the verge of tears, because I think that the first thing that goes through your mind is I saw everything in the mirror pretty clear, and that car really went up in the air pretty high, and he hit – I could just see that it was a black object hit that fence, so I’m assuming I’m looking at the undercarriage of the car. I’ve never seen – I’ve never really seen a roll cage handle those catch fences very well, and I was just very scared for whoever that was.  I didn’t even know what car it was, so I was just very scared for that person.”

13 fans were checked out in the stands with eight declining care, four treated on-site, and one was taken to the Halifax Hospital listed in stable condition.

Dillon was released from the Daytona Infield Care Center with a bruised tailbone and arm, and in good spirits.

The race was rain delayed by three hours, 34 minutes, taking the green flag at 11:43 p.m.  Earnhardt stayed ahead of three other multi-car accidents, marked by restrictor-plate racing.  The first happened early on Lap 4 and involved nine cars.  On Lap 87, seven cars wrecked during an accident in Turn 2 (with Carl Edwards and Brian Scott getting knocked out of the race).  Eleven cars were involved in a wreck that occurred on Lap 106.

With 12 laps to go, David Ragan spun on the backstretch to bring out a caution.

The track went green with nine laps to go, Earnhardt leading Johnson and Hamlin.  But the cautions weren’t over, as Sam Hornish, Jr. spun out with six laps left, setting up a green-white-checkered finish.

Earnhardt broke into the lead with Hamlin close behind and Little E was able to hold on from there.

Saturday’s qualifying was called off because of the weather, with Earnhardt awarded the pole after having Friday’s fastest practice time.

The average speed for the Coke Zero 400 was 134.941 mph with nine caution flags for 43 laps.  In addition, there were 22 lead changes among 12 drivers with Earnhardt, Jr. leading six times for 96 laps.