During a holiday weekend when many of us spent time relaxing, three well-known drivers in the NHRA put in the hard work needed to earn one of the biggest victories of the 2019 season at the Chevrolet Performance U.S. Nationals at Lucas Oil Raceway. After coming close to a victory at this race last season, second-generation nitro racer Doug Kalitta, whose famous uncle Connie Kalitta won this race 25 years ago, finally raced his way into victory lane after 22 starts.

Kalitta wasn’t the only NHRA legend to break a long-standing dry spell at Lucas Oil Raceway on Labor Day Monday. One of the most renowned Funny Car drivers, who recently won his 150th race, was back on top in Indianapolis. John Force, who turned 70 in May, broke a 17-year drought at the sport’s biggest event after taking down Jack Beckman in Monday’s final round. After two seasons without a Pro Stock race win, Alex Laughlin also ended his winless dry spell after driving his Havoline Chevy Camaro to an upset win over Elite Motorsports teammate Erica Enders during Monday’s final round. 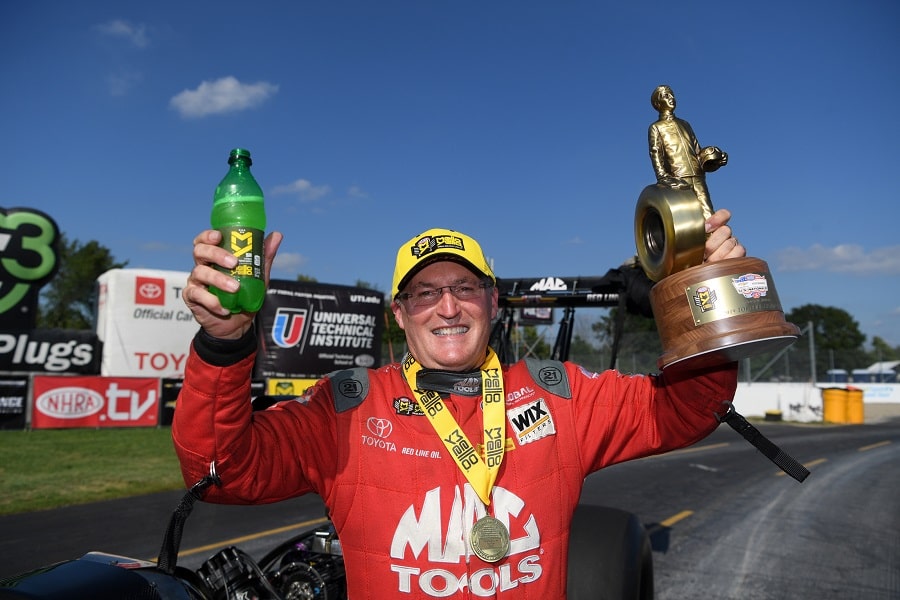 Despite Brittany Force leading the pack early in the holiday weekend, thanks to a blistering track-record pass of 3.645-seconds in Sunday’s final qualifying session, it was Kalitta who seemed to have all the spark on Monday. Beginning with his seventh holeshot win of the 2019 season against Clay Millican in a first-round bash in which both ran 3.721-second pass, he followed up with a win against demanding driver Brittany Force, whose powerful Advance Auto Parts rail dropped a cylinder early. Force’s teammate Austin Prock fell next to Kalitta after losing traction at the hit in the Montana Brand dragster, ending the rookie’s first Indy one round shy of reaching the final. Kalitta, meanwhile, was steady with a 3.76-second pass to reach the final round for the second straight year and the fourth time in his career.

Although Kalitta would fall short to Terry McMillen by just .001-second in the final round, this year ended his winless streak. After lining up against Billy Torrence in Monday’s final round, Kalitta pulled away from Torrence at halftrack and coasted across the stripe at just over 212 MPH to end a long-standing dry spell and become the third straight first-time Indy Top Fuel winner and the 30th Top Fuel winner in Indy history.

“This win is incredible,” said Kalitta. “I am a real persistent guy who never gives up and after we got past the first round, I was thinking that I really had a chance to win this. The final was kind of ugly and I was just coasting at 800 feet with no power – it started spinning and I think it threw the belt off – and I thought it was over, but when my win light came on I was so relieved and elated.”

Thanks to this win, Kalitta now sits in the top three of the point standings going into the start of the Countdown to the 2019 Championship. 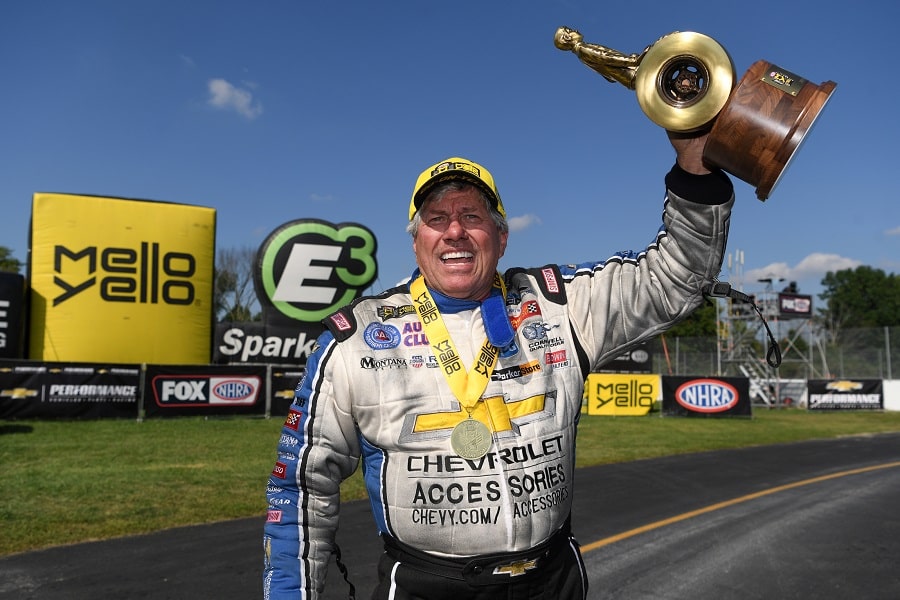 Kalitta wouldn’t be the only longstanding NHRA legend to end a winless streak in Indianapolis. After 17 years of failing to win at the NHRA’s biggest event, John Force appeared in his ninth final round at the Chevrolet Performance U.S. Nationals thanks to some of the Monday’s best runs in his Peak Chevrolet Performance Accessories Chevrolet Camaro SS. He began with a 3.851-second run against Jonnie Lindberg and moved on to a 3.913-second victory over his teammate, points leader Robert Hight, then a 3.940-second pass to best tire-smoking Matt Hagan in the semifinals.

These victories would lead to a final round match against Jack Beckman, who defeated Robert Hight before taking on John Force Racing owner John Force. Although Beckman put up one heck of a fight in Labor Day’s final round, Force’s final pass of 3.919-seconds not only ended a 17-year drought at the sport’s biggest event, but also gave the 70-year-old driver his 151st Funny Car win.

“After I had my accident in 2007, the doctors told me that I would never race again,” said Force. “Then I started hearing ‘You are 70 years old, this thing is over.’ While I would have days where I would start to believe these lies, it is really about how bad you want something. You do something because you love it and when you stick with this you see victories like this one.”

Much like Kalitta, Force also sits in the top-three in the Funny Car point standings heading into the Countdown. 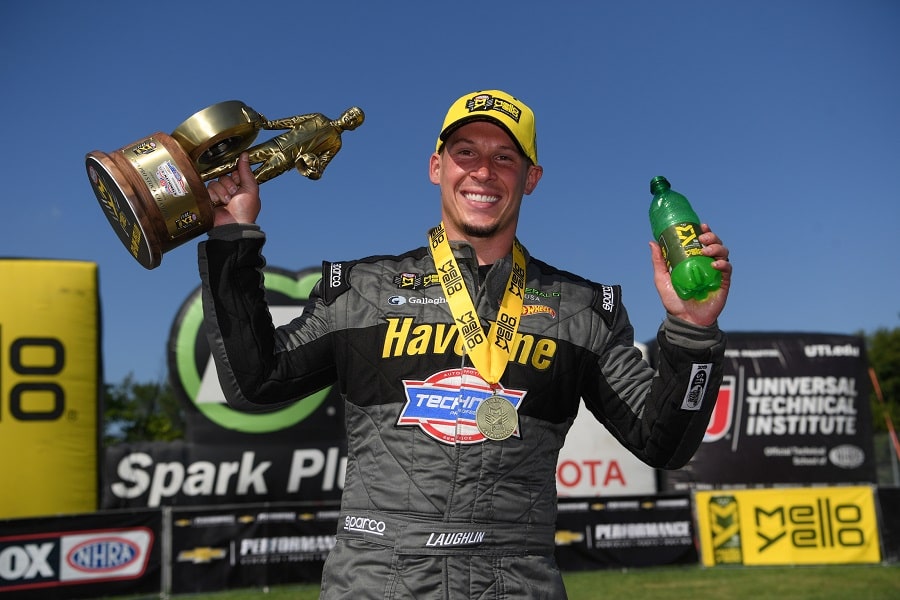 Although two drivers who many thought were past their motorsports prime found victories at this weekend’s Chevrolet Performance U.S. Nationals at Lucas Oil Raceway, Monday’s Pro Stock Series final would end the winless streak for one of this series’ young guns.

Elite Motorsports driver Alex Laughlin has been one of the leading contenders in the Pro Stock class for much of the season, and he entered Indy as the No. 2 seed in the class behind 2017 champion Bo Butner, but he’s been winless since 2017. After entering Monday’s elimination rounds as the No. 5 seed, the driver few thought would pull off a victory worked his way to the final round with wins against Steve Graham, Val Smeland and Deric Kramer with consistent runs of 6.603, 6.622, and 6.619-seconds.

These runs led to a final round race against teammate Erica Enders. Enders, who like Laughlin came into the final seeking her first win of the season in one of the best cars in the Pro Stock class. She come up short after her Melling/Elite Camaro was wounded in Monday’s final round, which gave Laughlin the opportunity to stick the nose of his Havoline Camaro in front, and sneak by for a narrow victory with a 6.64-second pass.

Like his fellow victors, Laughlin has also moved into the top three in the point standings going into the start of the Countdown to the Championship.

The 2019 NHRA Mello Yello Drag Racing Series season continues at the Mopar Express Lane NHRA Nationals Presented by Pennzoil Sept. 12-15 at Maple Grove Raceway, which is the kickoff to the Countdown to the Championship. Stay tuned to RacingJunk.com for all your NHRA coverage!