Most of us would like to make a positive contribution to the future, ensuring the next generation benefits from our efforts. Jeg Couglin of JEGS High Performance has an idea for how he’ll do just that – together with the Jr. Dragster JEGS team, he’s developed a turn-key conversion kit to transform alcohol-powered Jr. Dragsters into electric machines, improving tuning, maintenance and long-term price.

“I wanted something for my grandchildren to drive,” Coughlin said. “I wanted to them to have an electric motor car that’s easy to maintain and easy to tune. We’ve done that with what we have going now.”

Even the kit’s developers have expressed surprise at just how effective the kit is. David Ruark, who helmed the Jr. Dragster team, explained its benefits.

“You can install this motor and the kit we’ve developed and never have to buy another motor for your Jr. Dragster,” he said. “Even as your child gets older and moves on to quicker classes, this motor can move from class to class with a few simple adjustments of voltage and amps. There is no need to get a different motor for each class, and that alone is going to save people a lot of money in the long run.

“Plus, we’ve taken away the cost of fuel. To refuel our car you just have to plug it in between rounds.” 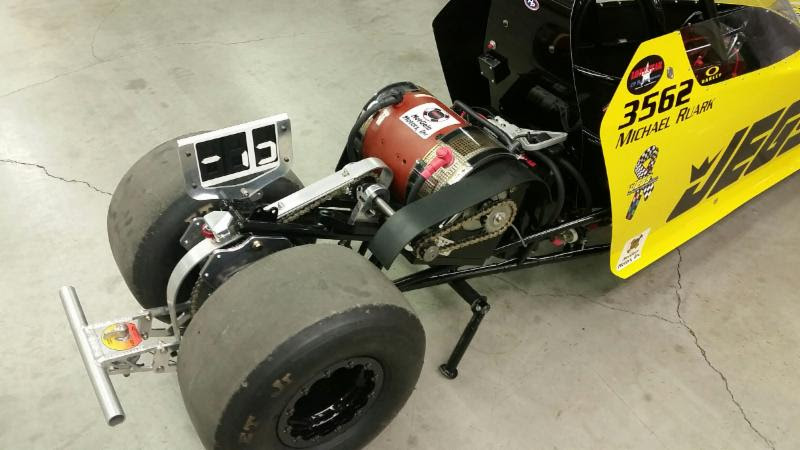 Coughlin wanted the kit to emphasize consistency, reliability and affordability rather than sheer speed.

“Racing at any level can be very expensive,” he explained. “Maintaining parts and pieces can be a big financial burden. We wanted to try to alleviate some of that worry and cost.

“I made a bunch of phone calls and researched several options. It took a while to narrow it down to a good, reliable motor and controller. We wanted something to get the kids more involved with tuning their own racecars, too. With the setup we have now, a child can plug in an (electronic) tablet and within a few seconds have a tune-up in the car that will run almost the same E.T. (elapsed time) and speed time after time.”

NetGain’s ImPulse 9 power plant, which charges via a 110v outlet, ended up fitting the bill. Sturdy and easy to maintain, with a rechargeable lithium battery pack that can last almost three years, it’s a great setup for a young racer.

“After 1,000 runs, you unscrew two bolts on the motor, replace the brushes, screw the bolts back on, and you’re ready to race another thousand runs,” Ruark said. “It really is that simple. Again, it gets the kids more involved because its something they can do themselves with little, if any, guidance from their parents. They can tune it and maintain it by themselves if they want.”

Ruark’s 17-year-old son, Michael, helped the team test out this combination of machine and motor. Impressively, Michael won 17 rounds over the course of a single weekend, his second outing in the EV junior.

“We sold our gas car after that,” Ruark said. “We’re totally committed to the electric car because it’s a winner time and again.”

Don’t worry about breaking the rules with this combination either. “There was already a section about Jr. Dragster electric cars in the NHRA (National Hot Rod Association) rulebook,” Coughlin said. “Our combination is completely NHRA legal for competition right out of the box.”

“We had a lot of people from JEGS working on this project,” Ruark said. “We had welders and fabricators and all sorts of help from so many people in the company. It really was a big team effort. Thanks to everyone who helped, especially Greg Cody, Rick Rossiter, Michael Ruark, Justin Beaver, Mike Rees, John Metric, Geo Hamstra and Tony Collier.”

“We live in a computer age, a technology-driven era,” Coughlin said. “I’m really proud of what we’ve accomplished with this program. It’s a wonderful, new program. It couldn’t have come together the way it did without great people doing great work.” 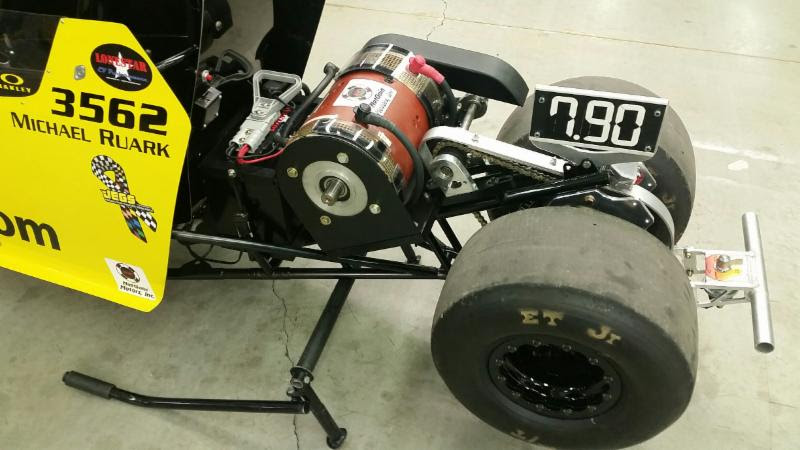 10 Comments on Drag Racing Goes Electric Thanks to JEGS