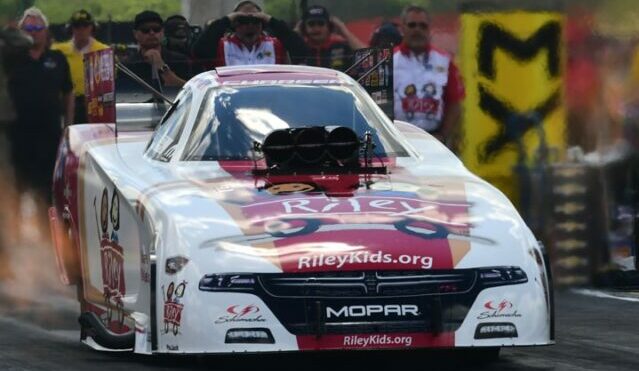 There are many events that wrap around the 65th Chevrolet Performance U.S. Nationals, both at Lucas Oil Raceway outside Indianapolis or in the general area. One of the biggest draws is the 14th annual Don Schumacher Racing Open House, which includes an immense hot-rod car show, music, games, food and an online or in person auction.

The DSR team also holds an annual “This is How we Roll” bowling function on December 11th, but the open house, which gives fans the ability to see the massive DSR facility is a don’t miss excursion. Both events benefit Riley Hospital for Children at Indiana University Health in Indianapolis, a facility dedicated to children’s care.

Taking place on Friday, August 30th this year from 10AM to 3PM EDT at 1681 E Northfield Drive in Brownsburg, just up the street from Lucas Oil Raceway, this open house invites anyone in the general area to see the 145,000 square-foot facility where race cars and race parts are designed and constructed and where the two DSR Top Fuel cars and four Funny Cars are built and prepared for competition. DSR currently fields dragsters for Antron Brown and Leah Pritchett; Jack Beckman, Ron Capps, Matt Hagan and Tommy Johnson Jr. pilot the team’s Funny Cars.

As he has since 2014, Tommy Johnson will, this weekend pilot a Riley Kids nitro Funny Car rather than using his standard Doug and Terry Chandler-funded blue-and-white Make-A-Wish livery. Prior to the event, on Wednesday August 27th, Johnson joined his fellow Indy-area teammates, Brown and Pritchett, as well as Hagan at Riley Hospital for Children. They played games and met with the facility’s patients.

During this 14th annual open house, fans will have the opportunity to meet and greet all DSR drivers, and can interact with team owner Don Schumacher, a Motorsports Hall of Fame of America inductee. More than 200 custom muscle cars, vintage dragsters and motorcycles are expected to be on display. Food trucks, Starbucks coffee and Papa John’s Pizza will be available for purchase and guests will have the opportunity o bid on rare and one-of-a-kind items in the silent auction that benefits Riley Hospital for Children.

For those unable two attend this wonderful open house, there remains the possibility to use the online link, http://dsropenhouse19.givesmart.com/ to support the DSR/Riley Children’s Foundation partnership. The link went live August 26th and is accepting donations and open house auction item bids. New auction items are added daily.