There are three ways to breathe new life into an older car that’s in need of some living attention. The first and what most people are aware of is the pure restoration. This is where you try to use only original equipment parts to bring the car back to what it looked like when it rolled out of the showroom. Another option, which is used by many that build for pure performance is to use modified or aftermarket parts for anything that needs to be replaced. MY favorite is the resto-mod, a combination of the two. 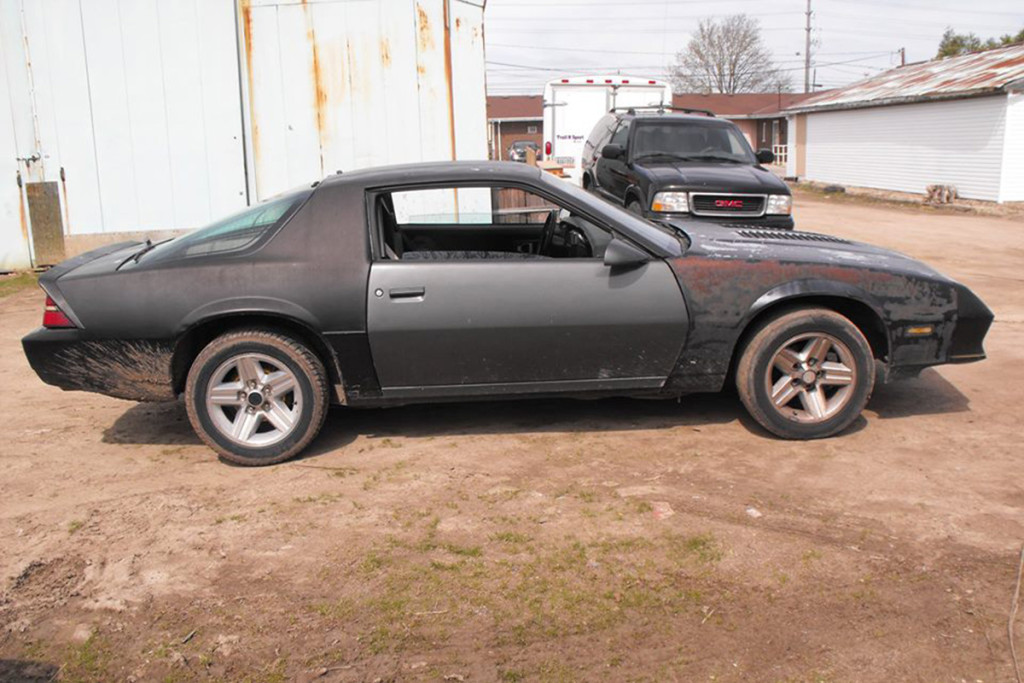 One of the reasons like doing resto-mods is because it can help save a significant chunk of change. Twenty or so bucks for a Chilton’s or Haynes Shop Manual, coupled with some tools that can usually be borrowed or rented if you don’t have them and some spare time is really all you need. Another fun thing about doing resto-mods is that you can build things that the maker never did with factory parts. Take for instance, my buddy Dan’s Camaro Project in progress. It’s got parts from three different cars in it. 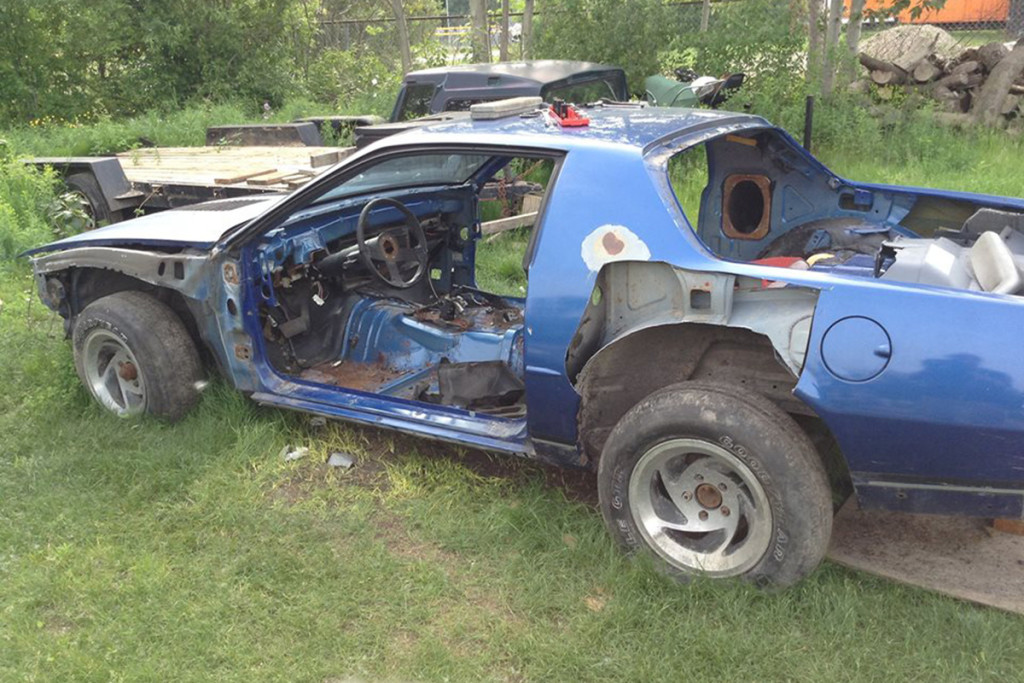 What the Project Has Consisted of to Date

Dan started with this black 1984 Camaro Z-28. The digital dash was dead. The engine ran, but it didn’t appear to be the correct one for the car. Dan went out and picked up a low mile IROC-Z for parts. He also ended up getting the steering column out of another car. The IROC-Z first donated its analog dash to replace the digital dash in the build car. All these changes precipitated a good deal of tracing wires to basically build a wiring harness from scratch, since none of the wiring he had matched up with the wiring diagrams he was able to find. 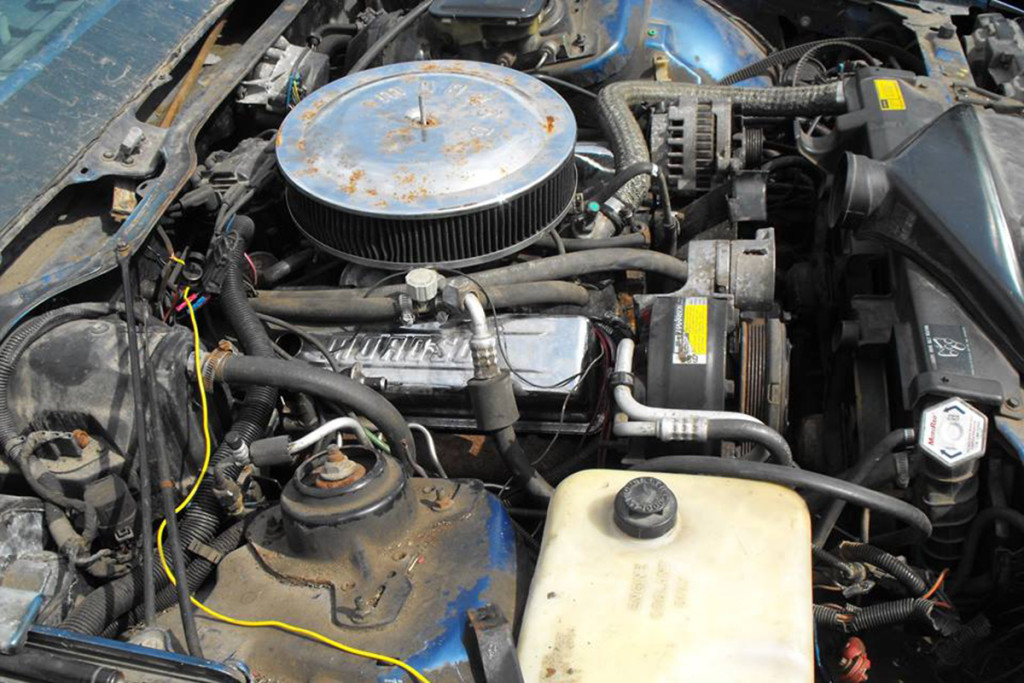 Although the engine in the project build car ran pretty good, it wasn’t the one that the car had coming from the factory. As providence would have it, the engine from the IROC-Z was. Out came the build car’s engine and in went the IROC-Z engine, after being cleaned up, receiving a small power massage, and receiving a paint job. I’m told that once he feels the project is completed, he’ll go back and rebuild the engine and tranny. The engine that came out of the build car is getting sold to help pay for parts. 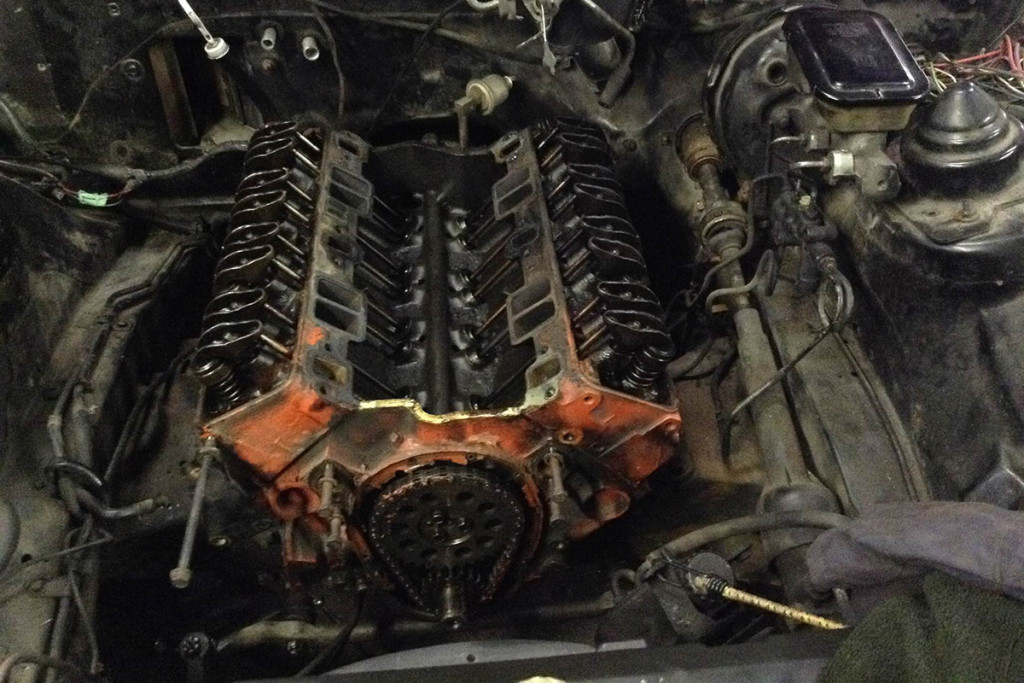 The IROC-Z had the best suspension of the production Camaros and the build car’s suspension was questionable. The upgraded factory suspension components came off, were cleaned up, and then reinstalled on the project Z-28 car. The parts that weren’t salvageable were replaced with aftermarket performance products from Summit. 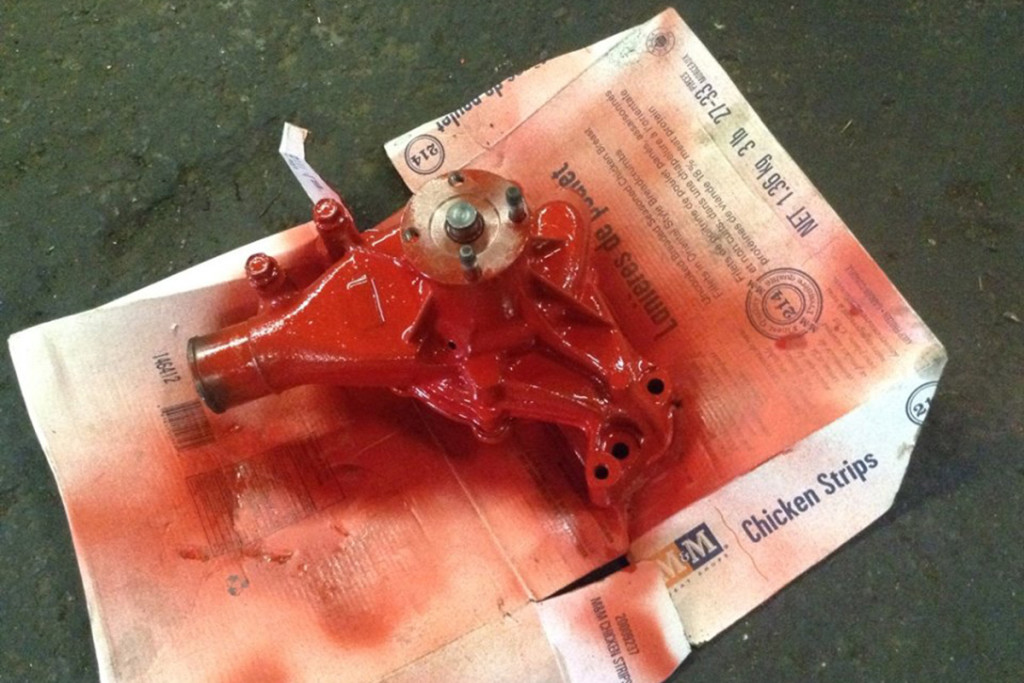 The IRC-Z engine was also pretty stout straight from the factory. Unless you’re out for gobs of white knuckle power, you don’t have to do much to get respect at the traffic lights. Dan pulled the stock intake and Rochester Quad carburetor and replaced them with an Edelbrock Torker 2 performance intake topped by a Holley Classic 650 four barrel carb. Fire is supplied through an MSD performance ignition and distributor. Eye candy was provided by cleaning up the existing chrome valve covers, timing chain cover, and air cleaner housing and then painting them a flat black with red lettering.

The stock exhaust manifolds and single exhaust would strangle the new intake and carb, so off they came and in their place went a set of custom headers into a custom dual exhaust-this generation of Camaro was surprisingly not really designed for dual exhaust, so this took a little ingenuity. The end result sounds really good for as close to stock as it is.

Dan didn’t want to sink the time or money into rebuilding the engine right away; he wanted to get behind the wheel as quickly as possible. After pulling it from the donor IROC-Z, he did a thorough job of cleaning the engine completely. All surface scale and rust was removed and the engine and water pump were given a few coats of engine block paint and gloss clear coat. 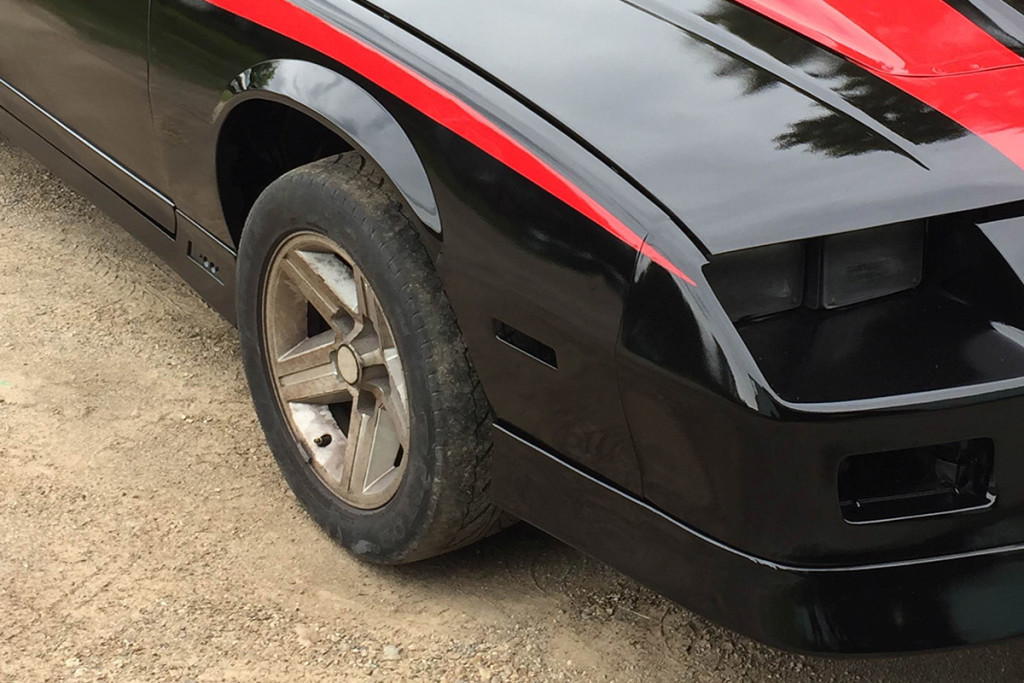 In order to save as much money on this project as he could, Dan did everything, including the body and paint work. He took the hood off the donor IROC-Z, cleaned it up and then cut a hole in it for the air cleaner. Over this went a pair of L88 style cowl vent scoops. Dan then took the body down to almost bare metal to make sure all the rust was gone. After a few coats of primer, on went a few coats of gloss black and red accents. As you can see, Dan went the full ten yards here by taking out the side markers and glass prior to painting to get the best possible finish. This s something that many people fail to do. 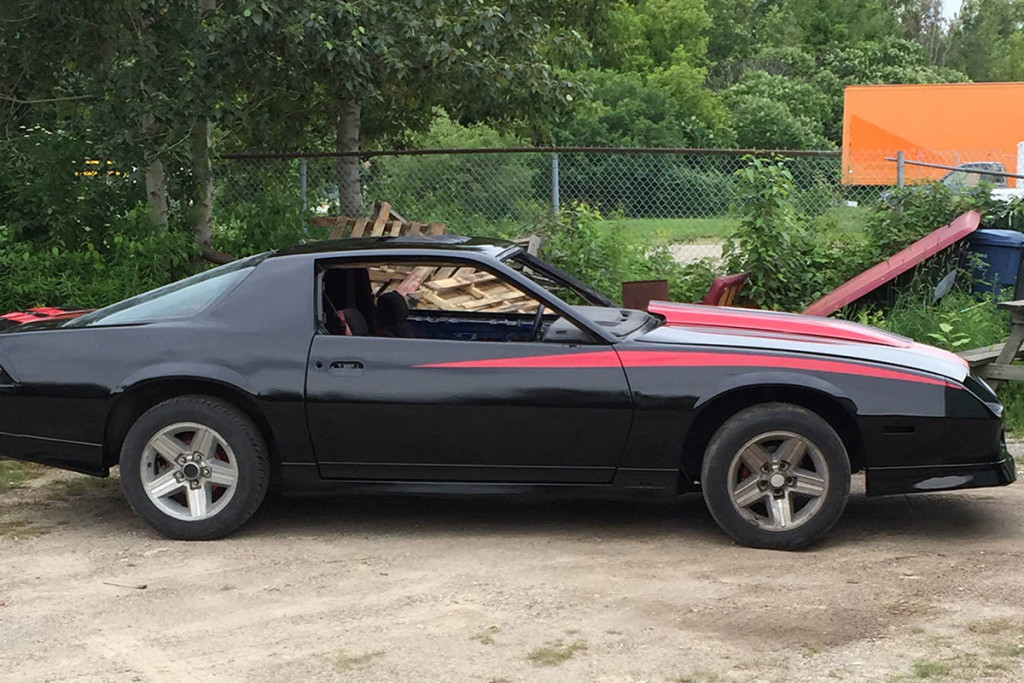 Other than the modified L88 scoops and the hole he cut for them to work, Dan didn’t do much to the body except clean and straighten it some. He did take the body skirting from the donor IROC-Z and install them on the Z28. This gives the car a lower stance and improves high-speed handling quite a bit by channeling the air out from under the car.

This is a biggie in my book. I hear quite a few people saying that they’ve had to wait years to complete their builds because they had to get the car show quality. When asked, they tell me they had and have no plans of entering it in shows. When pressed, I’m told they felt they had to do everything they did, but they felt it cost too much. 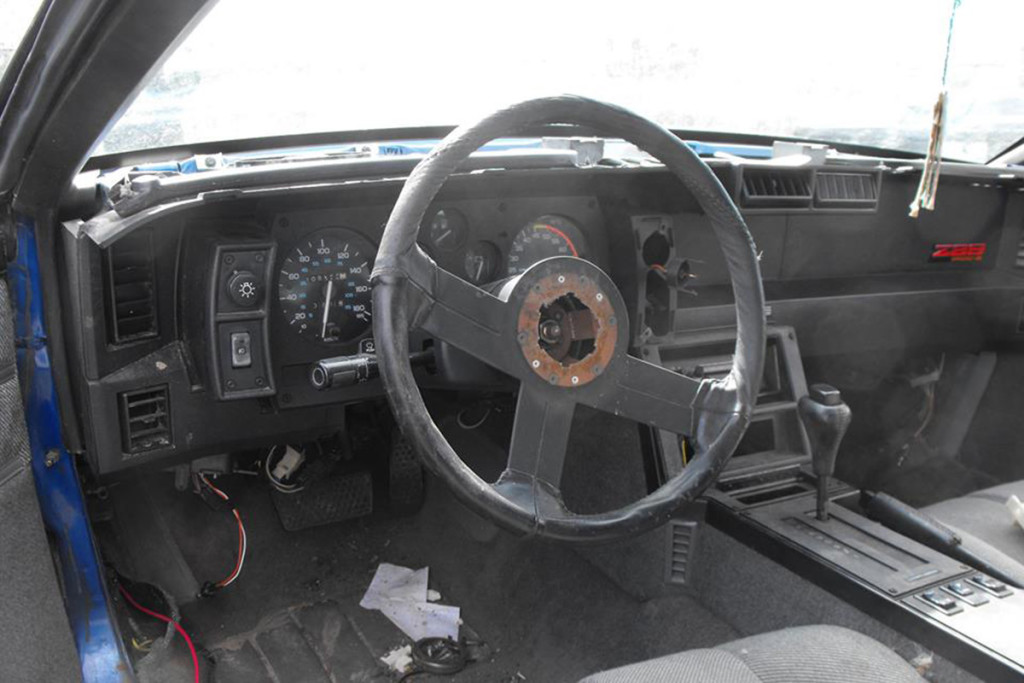 This is an erroneous assumption. If you want to build a strip burner, build one. Put the minimum amount of effort and money into interior and body improvements and upgrades. Then concentrate on building up the engine and, to an extent, the suspension. Dan is extremely happy with the way his car is turning out. He’s actually surprised that it turned out, in his words: “As good as it did.”

Dan’s car is an excellent example of a resto-mod, heavy on the mod part. By combining parts from three different cars (and trim levels) he’s made a car that is basically one of a kind. It’s his. It may superficially resemble every other 1984 Camaro out there, but it is quite different. Even better, it fits his personality fairly perfectly.