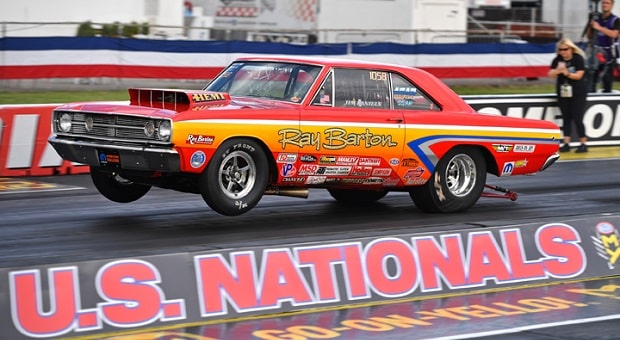 This popular NHRA Sportsman event at the U.S. Nationals became a focal point of FCA US LLC’s promotion for its racing endeavors in 2001 and has encouraged the manufacturer to return for more excitement each year.

“We’re proud to continue as title sponsor during one of the most prestigious events on the NHRA circuit,” Beahm stated. “It speaks volumes about the legacy of our brand at the drag strip and the passion of our fans to see HEMI-engine-powered vehicles from more than 50 years ago side-by-side in the staging lanes next to our modern-day Dodge drag cars.”

The 1968 Dodge Dart and Plymouth Barracuda models were called “package” cars because they were purpose-built as a distinct package for use solely on the drag strip. They serve as precursors to FCA’s modern-day package car, the Mopar Dodge Challenger Drag Pak.

A winner’s purse of $15,000 and cash awards for all 16 qualifying drivers is at stake in this competition. There’s also a unique trophy awarded to the winner, the 42.6-pound NHRA Dodge HEMI Challenge trophy, which was created as a callout to the 426 HEMI engine.

Dodge//SRT are exceptionally active in NHRA racing, with a Dodge Top Finisher contingency program now in its third year. This program awards $500 each for the Stock and Super Stock competitors who advance the farthest in each event while driving a Mopar-powered race car. This award is given in both classes at all 24 NHRA National events.

Dodge//SRT also returns as title sponsor of the Dodge Mile-High NHRA Nationals presented by Pennzoil, held at Bandimere Speedway outside Denver and scheduled for July 19-21 this year. This year the brand takes over title sponsorship at the Dodge NHRA Nationals presented by Pennzoil, held on The Strip at Las Vegas Motor Speedway October 31-November 3, NHRA’s penultimate contest of the year.