Dale Earnhardt Junior announced at the beginning of the season that he was going to retire; 2017 would be his last year of full-time competition in the Monster Energy NASCAR Cup Series. Since then, even in comparison to his shortened 2016 season, he’s had a mediocre season at best. This has led to some speculation that maybe his heart isn’t in it the way it needs to be this year.

His Last Season has Been Among the Worst of His Career

Ever since he received medical clearance to resume competition prior to the 2017, the sport’s favorite driver for the last million years has told fans and the media that he was eager to get the season going and fight hard for a championship. He told fans and the press, “I feel great, and I’m excited to officially be back.” It hasn’t seemed like it, though.

Out of the 26 races run so far this year, he’s been in five wrecks and lost his engine twice. One of the times his engine failed, he admits it was because he missed a shift. He doesn’t seem to be concentrating the way he did in previous years. He’s had moments at tracks like Daytona, Pocono and Michigan where “the old Dale Jr” was driving and fans had hopes for him. The rest of the time he’s almost seemed like he was just marking time until Homestead and retirement.

Most Junior fans who I’ve spoken with this year tell me that even in interviews he sometimes looks and sounds different from previous years. He almost appears timid at times on the track. At other times he appears to lose focus and commits errors that cost him major positons on the track. He’s doing pretty good, up in the top ten, and then he makes a mistake on pit road or enters a turn too hot and loses track position having to recover it.

There have also been numerous occasions this year when Junior’s had opportunities to advance and win races if he would just take a couple chances and make passes. Last week at Richmond was one of the few times that he and crew chief Greg Ives took any sort of risk and stayed out on old tires, trying to wait out the inevitable last-race caution. He ended up having to pit under green and finishing 13th after leading 13 laps.

Junior has said a couple of times this year that his concussions have nothing to do with his poor performance. Back in August he told reporters, “There are a lot of things that play a role in being competitive. I think that I’m healthy and I’m happy and thrilled that I’m healthy. I think I can drive a race car, but there is really no excuse for us not performing well or meeting expectations. There is no excuse for missing a lot of races. Kyle (Busch) missed a lot of races with his injuries (in 2015) and came back and was successful right out of the gate.”

However in another interview, Dale Junior told the reporter that he’s wondered if he’d suffer another one. “You can’t completely block things like that out of your mind,” he was quoted as saying. During his recovery, he said that he didn’t really care about racing; that he just wanted to get better. He said the blurry vision he suffered scared him to death. “If you’re a football player and you blow out your knee or tear your ACL or something, you know what that felt like; you know what the rehab was like, how hard that is to get back. So you can claim it’s out of your mind or you don’t think about it, but it is. It’s in the back of your mind all the time. Having that experience is a memory that you can’t escape.”

Most Junior fans think that the concussions he suffered and his deciding to sit out the last half of last year affected him mentally more than he wants to admit or even realizes. We’ve seen where if he had been able to make that split second decision to go with the line with a run he’d have been able to drive up closer to the front. We’ve seen where he’s lost his concentration and down-shifted instead of up-shifted, costing him an engine. He’s overshot his pit while up near the front a few times. It just looks like “his head isn’t in the game” at times. Other times we see moments of brilliance where he resumes his role as The Pied Piper of some tracks.

Poor Chemistry and Weak Hendrick Showing Blamed by Some

A number of NASCAR fans out there feel that Dale Junior and Greg Ives don’t have good chemistry together and the performance they both give on race day suffers because of it. They say that Junior not giving the races his all has made the poor chemistry that he and his crew chief have worse. This has made it so the two can’t communicate the way they need to in order to make Junior’s car faster during the race, so he languishes outside the top 20 most of the race. The close to five minute “discussion” at Bristol, trying to figure out the needed adjustments, reinforces this belief.

There’s also the fact that the Hendrick organization as a whole isn’t doing too well this season, even though Junior’s the only one who didn’t make the Chase. They cite the fact that the four teams split four wins, with Kasey Kahne’s win at Indianapolis coming down to luck and not a winning performance. This group then points out that as an organization, Hendrick has only succeeded in winning three stages this year – Chase with two and Jimmie with one.

There’s a small but vocal group of Junior detractors out there who have said for years that he’s over-rated and his popularity is based upon his name and maybe his temperament, but it’s in no way based upon his ability as a driver. This group says he’s been just an average Cup driver over his career and downright mediocre this year – an “Also Ran.” 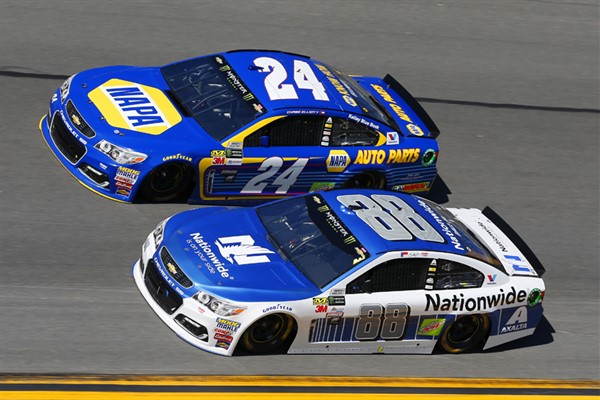 The really nasty ones blame it on his new wife, Amy Reimann. They say that she’s wrapped him around her finger and decided for him that racing was too dangerous, that he had to hang it up after this season. “Just go out and makes laps without taking risks,” is what they say Amy keeps telling him. Of course, these are the same guys who say Danica Patrick was only brought into NASCAR because she’s a pretty face and brings women to the races. They say her open wheel success was because of her looks and the other drivers were just being nice to her.

Whatever the reason, thousands of his fans are disappointed that they won’t see their favorite driver racing for a championship before he retires. Well, maybe he’ll come back to and dominate Xfinity!