Deric Kramer’s proficiency as an NHRA Mello Yello Pro Stock racer hasn’t been in doubt throughout his career. Up until two years ago, though, he drove a Dodge Dart, a machine that was clearly not allowing the Coloradan to show his talents as well as he could.

When Pro Stock’s prime Dodge driver, Allen Johnson, retired, most every competitive soul turned to the Chevrolet Camaro. Kramer was among them, taking his American Ethanol sponsorship to the Chevy side of the fence, earning his first two national event wins in 2018 and qualifying for NHRA’s Countdown to the Championship six-race playoffs.

Prior to that, the sole victory Kramer had achieved was in the Goodyear Battle of the Burnouts during the 2017 Chevrolet Performance U.S. Nationals.

On the first Sunday in June, Kramer grabbed his initial 2019 victory and first yellow winner’s hat since Brainerd in 2018. He defeated a tire-shaking Rodger Brogdon, took a very close win against Matt Hartford, achieved another tight win versus Alex Laughlin and, in his seventh final-round appearance – and first of the year – prevailed over a red-lighting Erica Enders.

His affiliation with KB Racing has definitely helped Kramer solidify his competitive capabilities in this very tight class.

“As a KB Racing-powered car, it was really cool to take out all Elite Motorsports cars on raceday,” Kramer said. “Pro Stock is a tough category and you really can’t make any mistakes. That’s been our detriment basically ever since Brainerd last year. In Indy, through the Countdown and even at the start of the year, we had more little mistakes. When you make mistakes in this class, it’s so close that you just can’t win.”

Kramer hasn’t been a full-time racer since he began competing in NHRA’s Pro Stock category in 2012, but he has increased his participation every year, running 22 of 24 contests in last year’s campaign. His Michael Hiner-tuned Camaro is now in seventh position with nine races left in NHRA’s “regular” season before the Countdown playoffs begin.

“My crew chief Michael knows how to put the power to the track,” Kramer stated. “He has had a lot of success out here with people like Ron Krisher and now that our team has the ability to run with the big dogs, he can really show off what he can do.

“When I saw that win light on when I was about to hit high gear, it’s a relief and you can just enjoy the ride at that point. You get six seconds of fun instead of six seconds of pressure on your way to the Winner’s Circle.” Kramer turned 6.532 seconds at 210.70 mph as Enders was disqualified for leaving early.

It’s still premature to say that this is the beginning of Deric Kramer’s ascension to the heights of Pro Stock NHRA racing, but it is good to see new blood in the Winner’s Circle this season. 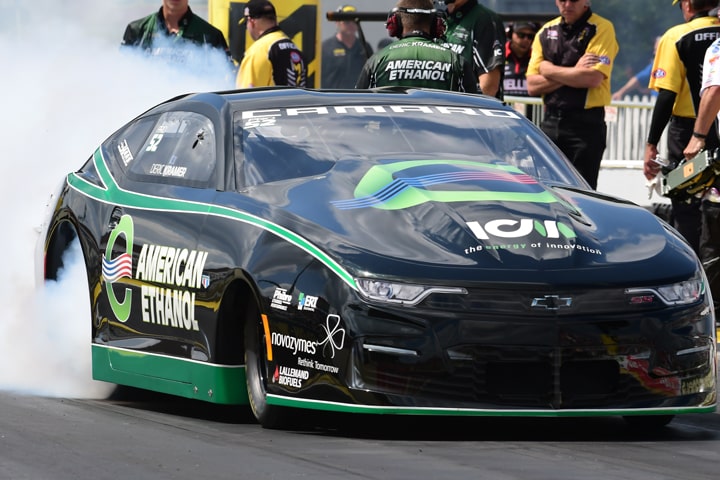 About Anne Proffit 612 Articles
Anne Proffit traces her love of racing - in particular drag racing - to her childhood days in Philadelphia, where Atco Dragway, Englishtown and Maple Grove Raceway were destinations just made for her. As a diversion, she was the first editor of IMSA’s Arrow newsletter, and now writes about and photographs sports cars, Indy cars, Formula 1, MotoGP, NASCAR, Formula Drift, Red Bull Global Rallycross - in addition to her first love of NHRA drag racing. A specialty is a particular admiration for the people that build and tune drag racing engines.