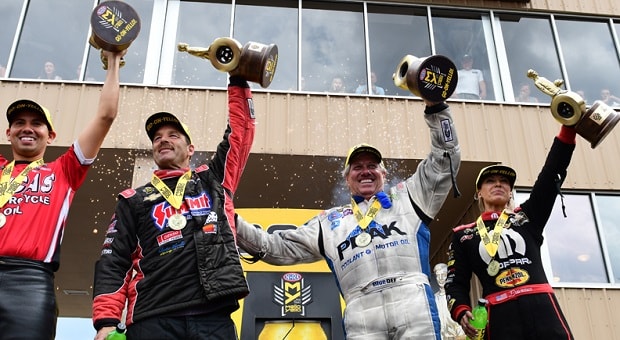 This has been an intriguing year for NHRA Mello Yello drag racing. While some of the expected racers have claimed Wally winner’s trophies in the first 14 contests of the 24-race campaign, there have also been quite a few first-timers (particularly in Pro Stock), and several drivers and riders have ended long-time droughts this season.

This past weekend was an exceptional one for those who haven’t seen the Winner’s Circle for a while. As Bandimere Speedway, site of the 39th annual Dodge Mile-High Nationals presented by Mopar, celebrated its 60th season of racing, Hector Arana Jr. earned his first winner’s trophy since the Gateway race (St Louis) in the fall of 2015. Now that’s an exceptional drought.

It would be easy to dismiss Arana Jr’s long wait as not being competitive – and this was his first final round appearance of 2018 – but this is the first Pro Stock Motorcycle rider to ever turn 200mph in the quarter-mile. And he did it twice at Gainesville this year, earning NHRA’s offered $10,000 for the achievement. To date, no other PSM rider has managed to crack the barrier – just Hector Arana Jr. and his family-tuned EBR (Buell). Arana Jr has always had a quick bike, but acknowledges that he’s made some unfortunate errors that have held him back from victory. After besting 2016 champion Jerry Savoie in the final round after the alligator farmer left before the green and fouled out Arana Jr said, “We have had a fast bike all the time. We’ve been working on consistency; when the bike was good I was making little errors.”

Greg Anderson has won lots of green hats this year, eight of them heading into the Denver race, but hadn’t had seen a win light in the finals. Anderson sat atop the standings without that win but it weighed on the Summit Racing/KB Racing driver throughout the first 13 races. Green hats for winning pole are nice; it was the yellow hat that Anderson wanted as he raced his teammate Jason Line for the 37th time in a final round.

It took a .015-second reaction time to beat Line, who tunes the fuel injection for his own Chevrolet Camaro, Anderson’s and three Summit Racing customer cars (including 2017 champ Bo Butner and Denver fast qualifier and first-time winner this year Deric Kramer). Qualifying in the evenings and racing in bright sunlight can certainly make it more difficult to find the right tune-up. The Summit Racing duo obviously found the right formula. 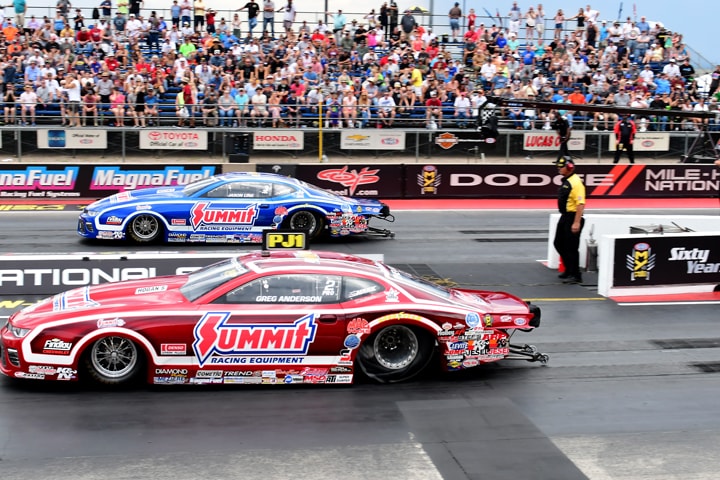 In earning his 91st victory – and first since the second Las Vegas race in 2017 – Anderson could afford to take a deep breath. “The class is so tough and it’s so hard to win, but the bottom line is that we haven’t put forth our best effort on Sunday. Today we did,” Anderson said. “All weekend long we did; the cars came off the trailer fast on Friday and that continued all through the weekend. We’ve had a dry spell, but hopefully this was a breath through and we’ll go on to get more wins this year.”

For Funny Car’s perennial champion, the ageless, 16-time titleholder John Force, 2018 has been a bad dream. A very bad dream. His John Force Racing team hasn’t had many issues – after all, daughter Courtney Force is leading the Funny Car standings, thanks to her four victories thus far in the 14-race campaign. She’s also been a major part of the green-hat gang, adding to her qualifying success on Friday and Saturday of this weekend.

But the last time John Force wore a yellow hat was last March in Gainesville; his 148th victory came at the 2017 Gatornationals, a heck of a dry spell for someone accustomed to being in the Winner’s Circle. In the first three races of this year Force beat up three cars – and his own body – with catastrophic explosions. There was a fourth implosion and the questions started to swirl about the veteran – was he over the hill? Apparently not. As Force hugged track owner and old friend John Bandimere Jr. he told this story: “I found myself with all the crashes and everything that happened, probably at the lowest point in my career. It has been worse than when I crashed in 20017,” Force said. “I didn’t know if I would ever get back in position to win a race. Bandimere told me I could and I won’t stand here and preach the gospel, but he said when I get to Denver I will be fixed.”

Force had no easy ride to win No. 149. He defeated Matt Hagan, Cruz Pedregon and Courtney Force before going up against the second most successful Funny Car driver in NHRA history, Ron Capps. With the final round victory, Force improved to 58-38 over Capps after posting 4.067 seconds to Capps’ 4.075-sec time. Force now has the advantage over Capps in final rounds, having won 12 to his fellow Californian’s eight. “I won this race, but I have a lot more fight in my belly,” he declared.

While it’s hard to think of Leah Pritchett as an underdog, the prolific drag racer from Don Schumacher Racing had a single victory heading into Denver (she won at Houston) and quite a few early race departures. Still, Pritchett and lead tuner Todd Okuhara finally found their way over the Denver weekend, leading qualifying to attain the No. 1, marauding through eliminations to be the victor in her sponsor’s race. 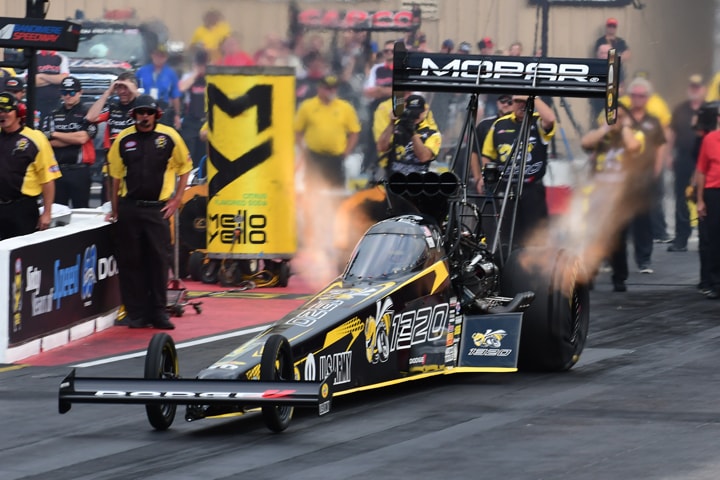 “This is all because I have a phenomenal team and an incredible racecar. It was here, in 1997, that I got my very first Wally,” Pritchett said. “I didn’t win the national championship in a Junior Dragster, but my team did. It’s not different today – this team got me my first Wally here on the Mountain. To me, this win is bigger than winning the U.S. Nationals. Winning on the Mountain is doing something.”