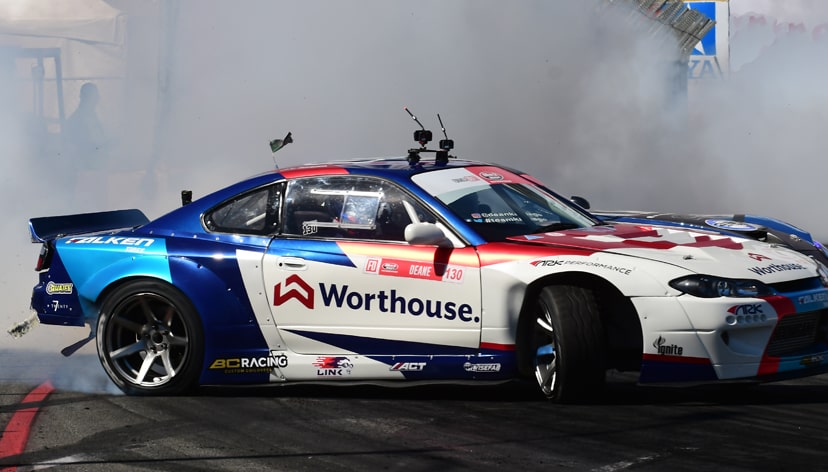 Formula Drift begins and ends its seasons in Southern California, where Drift gained popularity as it traveled from Japan to the United States. Each campaign begins on the streets of Long Beach, using a small part of the Acura Grand Prix of Long Beach race course; Formula Drift ends its season, also traditionally, at The House of Drift, Irwindale Speedway, about an hour’s distance from the start’s site.

Between April and October, the series visits Orlando, FL; Atlanta, GA; Wall, NJ; Monroe, WA; St Louis, MO and Dallas, TX. As Formula Drift arrived in Irwindale for their grand finale, there were four drivers who had a mathematical chance to usurp two-time champ James Deane, the Irishman who has made this American series his own.

Challenging Deane coming into the finale were his Polish teammate Piotr Wiecek, Fredric Aasbo of Norway, Aurimas “Odi” Bakchis of Lithuania and American three-time champ Chris Forsberg. With three former champions in the mix (Deane, Aasbo and Forsberg), there was no room for error in this competition. Deane had a 19-point cushion coming in to Aasbo. With extra points available for qualifying, Aasbo and the balance of the challengers needed Deane to be eliminated early for them to have a realistic opportunity.

A less-than optimal full field made for byes in the round of 32 for the top qualifiers, but with Deane taking sixth place in qualifying in his Worthouse/Falken Tire Nissan Silvia S15 and Aasbo ranked tenth after foregoing a second run in his Rockstar Energy Drink/Nexen Tire Toyota Corolla, drama ensued. Aasbo had a misfire in his first qualification pass, so the Papadakis Racing team elected to sit out the second run, replacing an inexpensive, errant part before Saturday’s competition heats.

By its nature, Formula Drift is known for intense high-speed drama. With favorites near mid-pack, the intensity ramped up in first the Round of 32, the Sweet 16, Great 8, Final four and the two-driver, side-by-side finals. The sold-out crowd at Irwindale Speedway was treated to collisions with the safety walls and multiple competition time-outs called by teams needing to effect repairs after ending up in the walls.

The championship fight saw Deane win his first round against American Kevin Lawrence, and then go to the Sweet Sixteen against crowd favorite Forrest Wang in his Achilles Radial/Yellowspeed Racing/NRG Innovations Nissan S15. Always great rivals, Wang was responsible for Deane’s early departure from last year’s finals, a result Deane was determined not to repeat.

It took a couple of tries, as the duo’s first round of play was too close to call. Deane needed this round win in order to take his hat trick of three consecutive titles and the judges opted for “One More Time” (OMT) after forced errors by both combatants. In their OMT battle, Deane was flawless, with equal angle to and better proximity than Wang. He was unanimously awarded the win, becoming the first driver in Formula Drift history to earn three championships in a row.

“I can’t believe it,” Deane exclaimed, jumping from his car after the round was completed. “I was in the zone with the battle against Forrest, trying my best to stop making the same mistakes I made on the previous two runs. It wasn’t until my spotter told me that was the battle for the championship that I realized what had happened. It’s unbelievable to be here after a challenging season where I’ve watched the level of driving come up so high.”

But that wasn’t the end of the night, as there were others racing and a race title to be decided. It would eventually come to the veteran Ken Gushi. Deane finally faltered in the Final 4 against Gushi, who went on to take victory. After enjoying a first-round bye, Gushi defeated newly-crowned rookie of the year Travis Reeder’s Napoleon Motosports/TurnKey/Nitto Tire Nissan 240SC S13. Gushi met Deane’s teammate Wiecek in the Great 8 and, in an OMT, defeated Wiecek.

After beating Deane in the Final 4, Gushi faced off against 2013 Formula Drift champ Michael Essa’s self-entered Autosport/Achilles Tire BMW M3. Essa had a rough ride to the finals, with engine issues keeping him from having ultimate power. Gushi’s form from qualifying through to the finals, coupled with Essa’s apparently ill BMW, made it appear the final result would be inevitable, but the challenger made Gushi work for it. A spin on the second pass ensured Gushi’s win and Essa’s runner-up slot. Deane was third in the final standings.

Gushi, who has competed in the series since its inception, took over management of his G Reddy team for this year. “That brought a lot of challenges, figuring out logistics, scheduling, prioritizing car development and more,” the winner said. “There are so many factors that can prevent me from being 100% focused on driving, so to get here at the last round of 2019, after overcoming all those challenges, and to be able to celebrate the win is a huge bonus.”

Formula Drift will announce its 2020 schedule during the SEMA show at Las Vegas the first week of November. 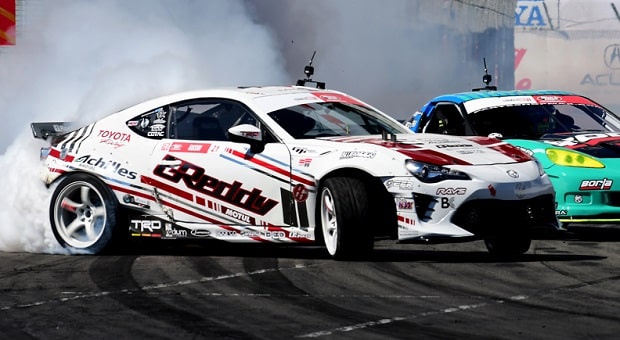