After competitors from the World of Outlaws rolled into the state of Pennsylvania, two drivers would clash the competition at this weekend’s World of Outlaws NOS Energy Drink Commonwealth Clash as well as the World of Outlaws Morton Buildings Late Models Thunder Mountain Thriller. Beginning with Sprint Car driver David Gravel whose hopes for a season win finally came to fruition after taking down Sheldon Haudenschild in the final laps of Saturday night’s 35 Lap Commonwealth Clash feature at Lernerville Speedway. Although most of the fans in the stands at Thunder Mountain Speedway on Saturday night were almost sure that they were going to witness Pittsburgh, PA native Jared Miley pull off the 50 Lap feature win, his worst nightmare came to fruition after the current king of the World of Outlaws Morton Buildings Late Models raced his way past Miley for another last minute win. 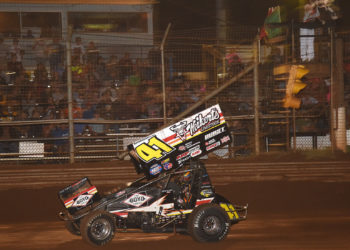 After a month of failing to return to Victory Lane with the World of Outlaws NOS Energy Drink Sprint Car Series, David Gravel seemed to have found his lucky penny after stealing the lead from Friday night’s hometown track winner – Sheldon Haudenschild – and driving this to an almost unattainable win.

Although Haudenschild would start second in Saturday night’s Commonwealth Clash, race winner Gravel would be the first to say that his competition “was the class of the field”.

While Haudenschild set a blistering pace as the race leader very early in this event, and even seemed to be in his own little world for much of this race, this blistering pace driver blew a tire with two laps to go in the 35 Lap race. Following the release of the No. 17’s stranglehold over the competition gave second place driver David Gravel the opportunity to race to the lead as well as the race win.

“Sheldon was the class of the field,” said Gravel. “If he did not blow a tire, I would have finished second in this race, but a little bit of racing luck got us the win. I cannot thank my team enough for giving me a car capable of hanging on for the win.” 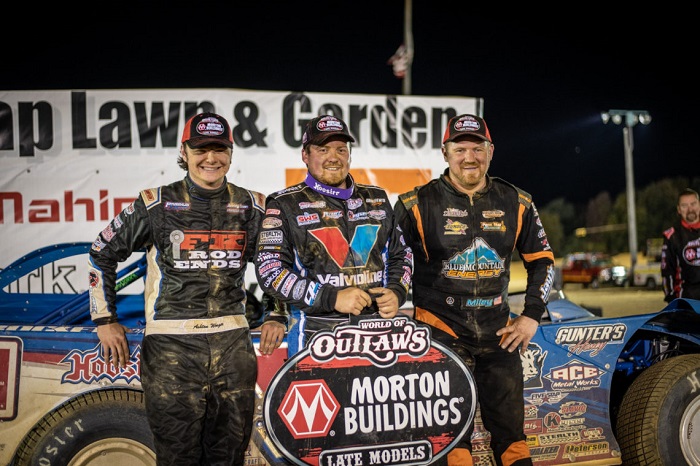 Sheppard Thunders to Another Impressive Victory

The current king of the World of Outlaws Morton Buildings Late Model Series was back at it again on Saturday night after taking the win at Thunder Mountain Speedway back from the driver that most consider the hometown hero.

Pittsburg, Pa. native Jared Miley was less than 3/8ths of a mile away from his first career World of Outlaws Morton Buildings Late Model Series victory on Saturday night until his worst nightmare would come true.

While young Jared Miley would start behind Brandon Sheppard at the start of Saturday night’s feature race at the Jefferson County, Pennsylvania dirt track it would not be long before the Pennsylvania driver would be leading 26 of the 50 laps of this race. After surviving four restarts without any trouble as he mastered the Sea Foam Restart Zone and holding off any other bids that his competitors had. That is until the last and most important restart came his way with the win on the line.

After the final caution flag flew after a smoking Gregg Satterlee stopped in turn four. Erasing Miley’s comfortable advantage and restarting with the Rocket Ship Brandon Sheppard of New Berlin, Ill. hot on his tail with a green-white-checkered finish on tap.

Despite Miley acing the restart the edge of turn two reached out and bit him, allowing Sheppard to drive by down the backstretch. Miley then launched a turn three slider at Sheppard and the pair ran side-by-side to the white flag with the crowd on their feet. Sheppard then tossed his own turn one slide job at Miley, then it was a frantic dash to the checkered flag. Coming to the stripe, it was ultimately Sheppard’s Rocket1 Racing No. 1 beating Miley’s Blue Mountain Energy No. 10 by a mere .302 seconds.

“That was a tough race, but man it was a lot of fun,” said Sheppard. “I got by Miley down the backstretch then he slid across my nose over there in turn three and I got him back down here in turn one; what a great finish. You had to drive the heck out of it here tonight. This Rocket Chassis is a dream to drive right now, especially in front of a packed crowd like this.”

Thanks to yet another win this season, Sheppard continues to lead the World of Outlaws Morton Buildings Late Model Series going into next weekend’s race at Cherokee Speedway in Gaffney, S.C. followed by a Saturday, October 3 date at 411 Motor Speedway in Seymour, Tenn. The World of Outlaws NOS Energy Drink Series will also resume racing at the Champion Racing Oil National Open at Williams Grove Speedway.

Stay tuned to RacingJunk.com for the latest in the dirt racing news.