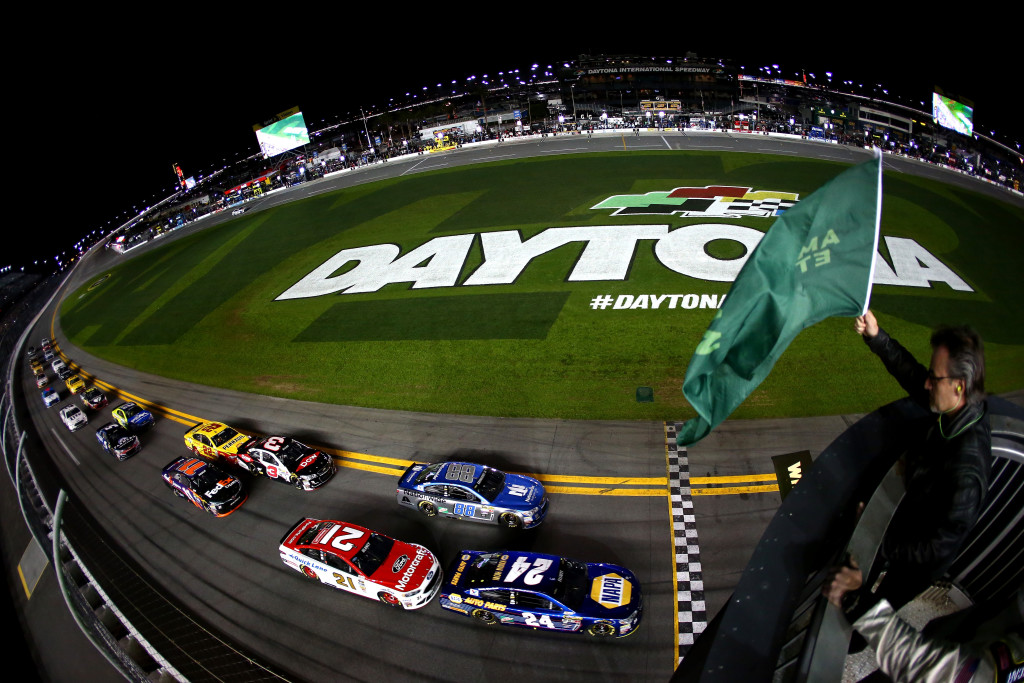 Since 1959, the two Daytona 500 qualifying races have become one of race fans favorite events of the year with so much on the line in NASCAR’s biggest race. In 2016, the pair of 60-lap qualifying races now called the Can-Am 150 Duels determines the top 32 starting positions for the Daytona 500, followed by four positions of the remaining fastest qualifying speeds and then filled with the highest earning teams in points from last year to complete the 40-car field. 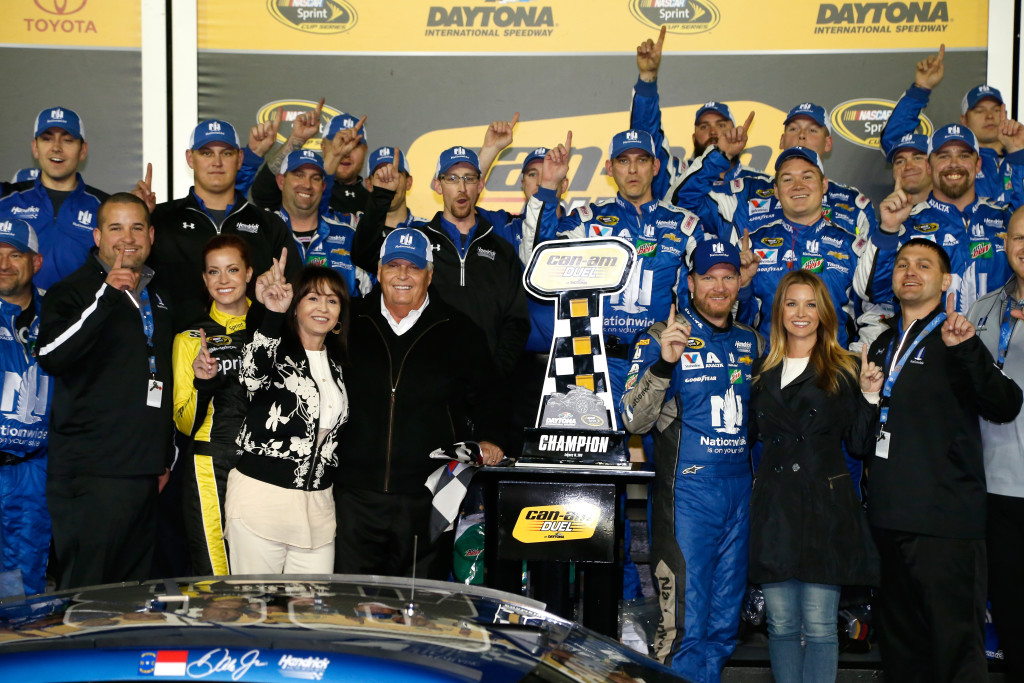 If Dale Earnhardt, Jr. is trying to give race fans a preview of Sunday’s Daytona 500, he’ll be doing it with his new best girl, his Chevrolet named Amelia.

Nicknamed for the famous aviation pioneer, Amelia Earhart, for Earnhardt, the race driver, it didn’t take him long to take flight, winning the first Can-Am Duel 150 Thursday night at Daytona International Speedway in establishing the starting grid for this Sunday’s Daytona 500.

The popular Hendrick Motorsports driver passed Denny Hamlin with five laps to go, using the quicker line of cars headed by Kevin Harvick, enabling him to dive to the inside and slip by for the lead on the frontstretch. At the finish, it was Earnhardt, Joey Logano, Ryan Blaney, Hamlin, and Harvick finishing in the top five. Pole winner, Chase Elliott, played it smart, finishing sixth in the first Duel.

“Denny is such a great plate racer,” Earnhardt said, who led for 43 laps. “There are a lot of guys that are really good at it these days. I knew he was going to be real tough to get around. When he got to the lead (during a sequence of green-flag pit stops), I didn’t know if we were going to be able to get around him. He’s got a great car and he’s real smart.

“For whatever reason, I was able to get to his quarter-panel, (and) he saw we had a pretty good run. I don’t know, I didn’t think I was going to clear him. We got away from him so he couldn’t side draft us, I guess. I was really as surprised as anybody that we got by him. He’ll be tough on Sunday.”

The win was Earnhardt’s 17th at Daytona overall and fifth in the Duel races on a night that was significant to Earnhardt. It was on this day 15 years ago when he lost his dad in the 2001 Daytona 500.

“I’m guilty of daydreaming a little bit about winning this race tonight because of the day,” said a solemn Earnhardt. “That was special to me. Glad nothing bad happened that we didn’t tear our car up, because that would be embarrassing on a day like this.” 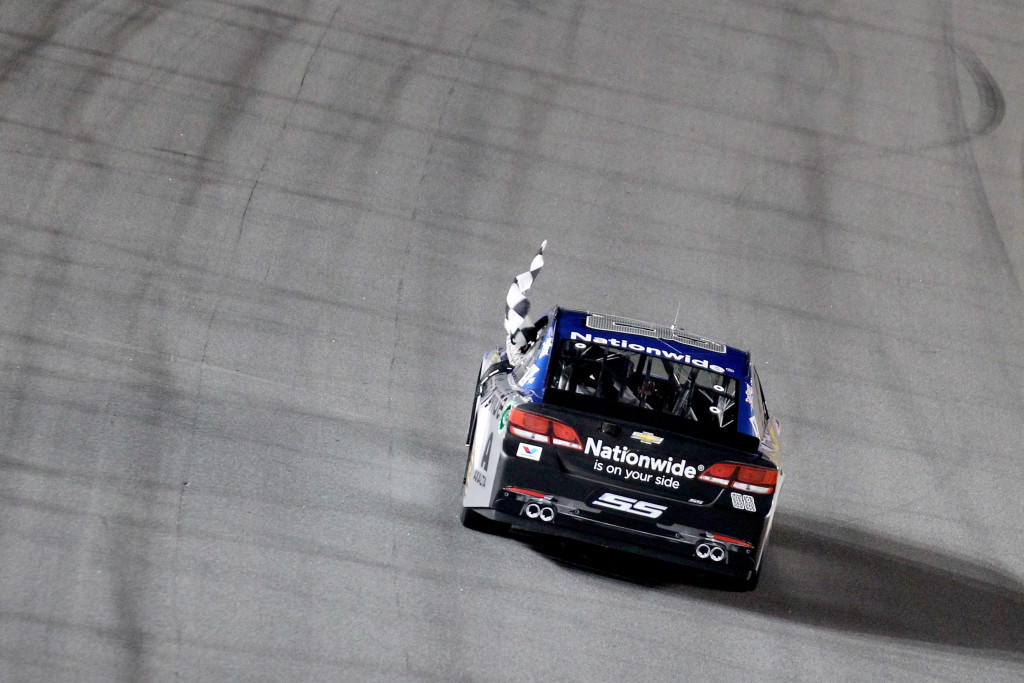 In the qualifying race, Cole Whitt brought out the first caution flag of the race on lap 43 after spinning out in an attempt to catch fellow contender, Michael McDowell for the final transfer spot of the race. Sad to say, Whitt took his car to the garage after the accident and out of the race along with Jose Wise, who finished 17th, both failing to make the tough Daytona 500 field.

On the restart with 12 laps to go, new leader, Denny Hamlin, who managed to get around the dominating Earnhardt with a quicker pit stop before the caution, held on as best as he could to fend off the simply quicker Earnhardt. When Earnhardt went to the point, he took over the race and was undeniably the quickest car in the field.

The only other accident was Brian Scott in turn four on the white flag losing control, spinning to the inside, causing him to make contact with the wall and flattening his front end.

The average speed for the first Can-Am Duel 150 was 172.911 mph marked by one caution flag for four laps. There were four lead changes among four drivers. 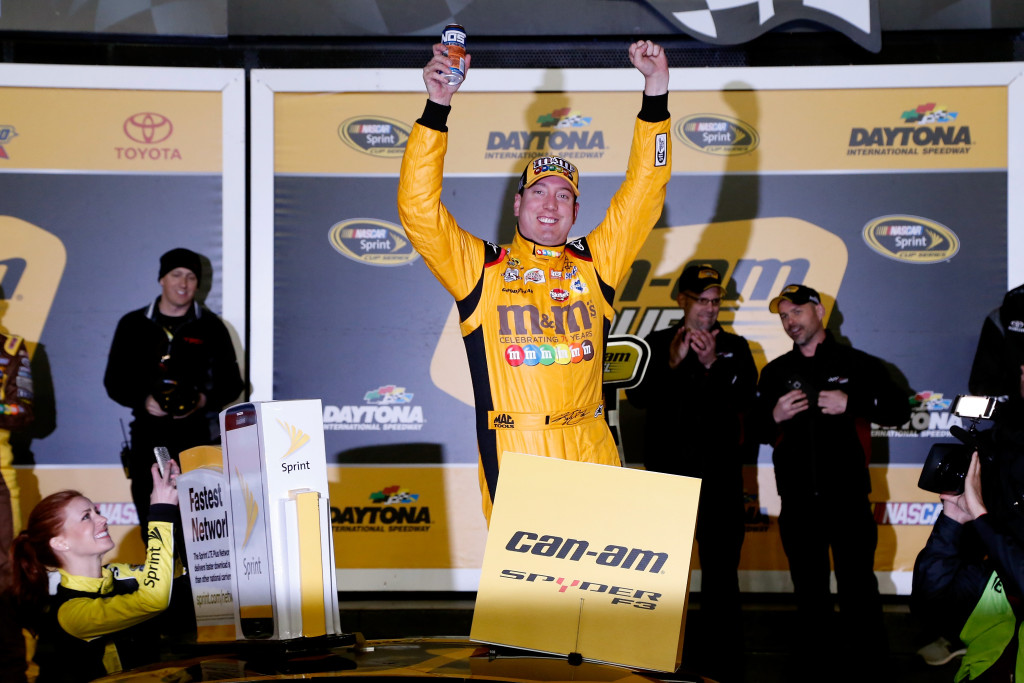 Just after taking the white flag, all it took was just a moment for front runners Jimmie Johnson, trying to avoid a blocking Jamie McMurray, to touch bumpers, sending Johnson spinning to the inside and clipping Kurt Busch in the door. In the chain of events that followed, the cars of Matt Kenseth, Martin Truex, Jr., A.J. Allmendinger, and Danica Patrick crashed together, relegating them all to back up cars with Kenseth losing the most, having to surrender his front row spot that he earned last weekend in time trials.

“I guess it was quiet and calm there  for a long time, and the last lap just went kind of crazy,” Busch said. “Great car. These guys at Joe Gibbs Racing did a phenomenal job this winter building some new pieces for us to come down here with and have some fun.

“Looking forward to starting the Daytona 500 in the fourth spot, but I think I will actually get the outside front row now that Kenseth got caught up in that mess and tore up his car.”

Casey Mears was running as high as third only to run out of fuel with three laps to go. The shift of positions including his exit gave Johnson and Kenseth a chance to make a run to the front, but were unsuccessful when No. 48 wrecked going into turn one. 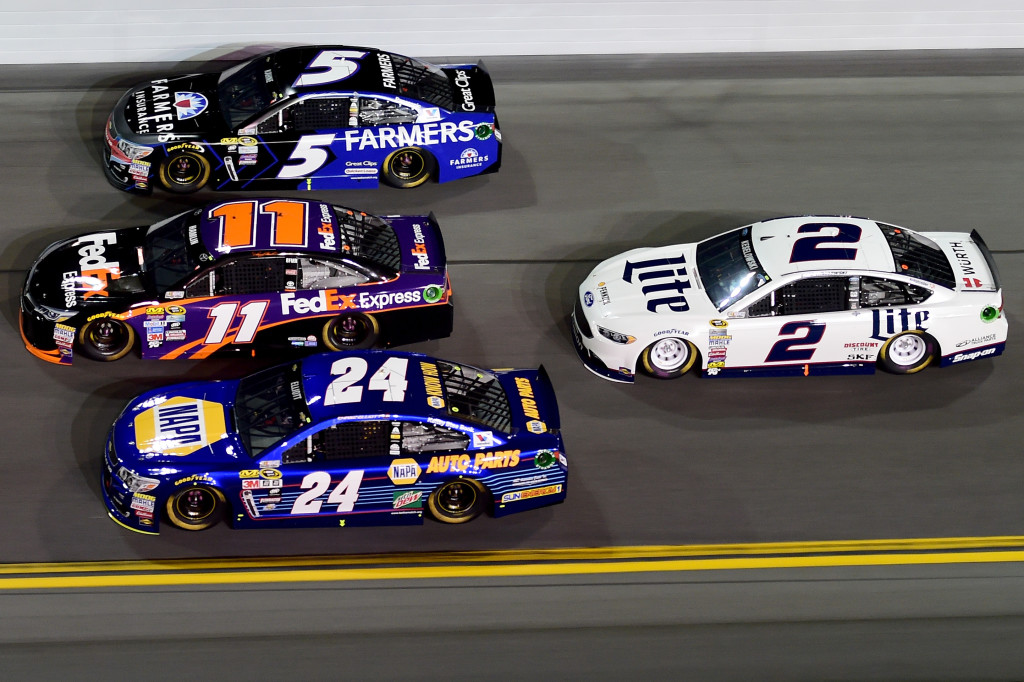 Earning the final transfer spots into the 40-car Daytona 500 field were Matt DeBenedetto and Robert Richardson, Jr. from the second qualifying race. DeBenedetto got into the 500 with his ninth-place finish while Richardson received his starting position by his Sunday qualifying speed. David Gilliland and Reed Sorenson were the unfortunate teams that did not qualify for Sunday’s race.

With the white flag lap as the only lap of caution, the average speed was 191.898 mph shared by three lead changes among three drivers with Busch leading the most at 35 laps.

The Daytona 500 will air on the FOX Network on Sunday, February 21 with a starting time of 1 p.m.