During the final day of the final race of a 24-contest season, the only place to be is at the top end of NHRA’s Auto Club Finals on the Auto Club Raceway in Pomona dragstrip. It’s where the emotions come to roost after 10 months of competition, when all the glory – and money – are on the line.

Top end is where the highest of the highs and the lowest of the lows converge, and that was quite neatly on display this past Sunday. It started with the sixth pair in Top Fuel. Double-champion-in-waiting and race winner Steve Torrence wasn’t pleased with the way loser Cameron Ferre deep-staged his dragster.

As they met for what’s traditionally a handshake post-race, the duo exchanged words. Which came to a shove by Torrence, captured by TV and National Dragster. It’s not the first time racers have come to blows and it seems like it happens all the time in NASCAR. While No. 1 qualifier Torrence pronounced himself “calm” leading up to race day, his temper took over. He lost it.

But Torrence didn’t lose much, as he moved on to race twice more before being eliminated by eventual runner-up Richie Crampton from Kalitta Motorsports in the semifinals. He was crowned champion after that semifinal loss and celebrated his second-consecutive title.

Once fans saw the fight, though, they began to lustily boo the Texan from the first round on through the night. Fans didn’t appreciate Torrence’s shove of Ferre, although neither they nor we knew what was said between the two that escalated this action. NHRA may – or may not – take action. As a reminder, John Force regularly deep-stages his Chevrolet Camaro SS. Had this happened earlier in the year it would be a yawner. 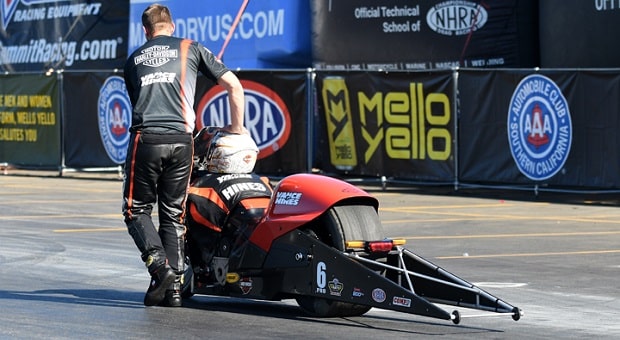 Pro Stock Motorcycle’s championship was up in the air until the final round. In the first round, Andrew Hines fouled out by leaving early against rookie Jianna Salinas. As she celebrated, a head-down Hines walked his Vance & Hines Harley-Davidson Screamin’ Eagle FXDR motorcycle past the championship photo area.

Salinas, on the Underdahl Suzuki, then won her second round against fellow Suzuki rider Steve Johnson, whose bike barely made it down the track. Same thing happened in the semifinals when three-time and defending champ Matt Smith’s EBR threw a rod. That brought the championship down to the finals, with Salinas racing Jerry Savoie. He wins and he’s champ; she wins and Hines takes his sixth title.

They both went through the water box and, as Savoie accelerated to stage, something in the engine broke. The Louisiana alligator farmer staged anyway, in the hopes his rookie opponent would do something stupid – cross the centerline, take out a cone, something. While she did none of that to gain her first NHRA national event title, Salinas’ pass down the quarter-mile was typical of her riding through much of the season. She didn’t hold the bike straight but leaned it the whole way down.

That gave Salinas her first win and Hines his sixth championship. It was a head-scratcher for sure, but as everyone said, “When it’s your day, it’s your day.”

Funny Car and Pro Stock didn’t quite have the challenges the other two classes endured. 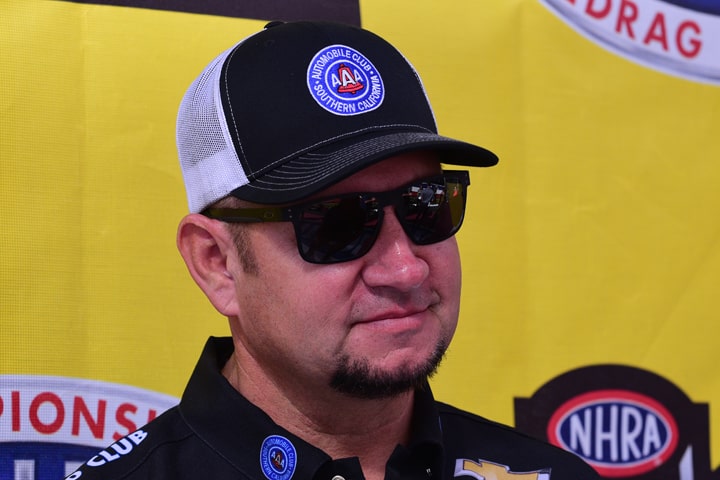 Even though Robert Hight secured his third Funny Car championship – and second in three seasons (2017) – he still lost the final race to runner-up Jack Beckman. After making a super-long burnout in his Camaro SS before the final round, Hight was unable to maintain power and his machine sat trackside until Beckman completed his pass and took his Wally trophy with a low of the day 3.920 lap. He lost the title by eight points. 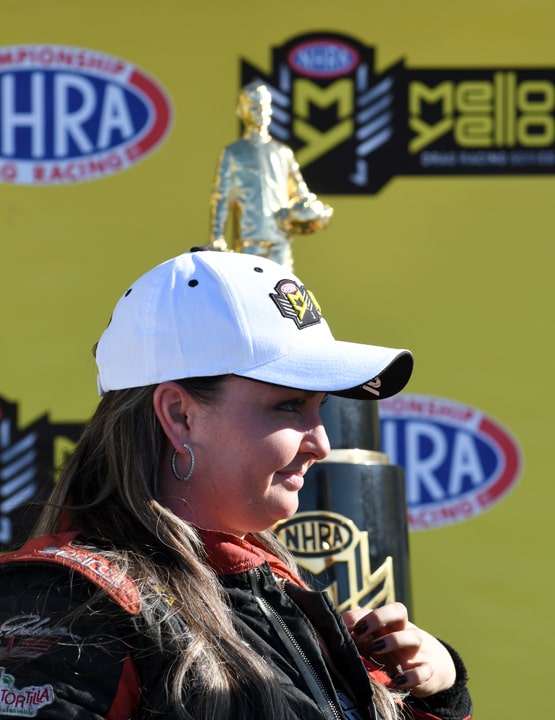 Greg Anderson’s ploy to take 15th in qualifying and meet Erica Enders in the first round of Pro Stock competition didn’t work for the four-time champion and 94-race winner. She beat him fair and square with her Melling/Elite Motorsports Chevy Camaro with a lap of 6.570/210.41 to Anderson’s 6.575/210.31. That’s close!

Enders was able to celebrate her third championship after the second round, but lost in the semifinals to the other story of this season finale: Fernando Cuadra. The Mexican, whose two sons also compete in Pro Stock, went to his second-ever final round but was unable to take advantage of it, losing to five-time Pro Stock champion Jeg Coughlin Jr., despite a better reaction time (.016 for Cuadra; .029 for Coughlin).

Post-race celebrations for, first for the champions: Torrence, Hight, Enders, Hines – and then for race winners: Doug Kalitta (who conceded the title to Torrence by only three points), Beckman, Coughlin and Salinas, extended for hours after the completion of competition. Unlike 2018, when all the race winners achieved championships, this year none of the season-long champions made it to the winner’s circle. That’s indicative of the kind of season 2019 turned out to be.