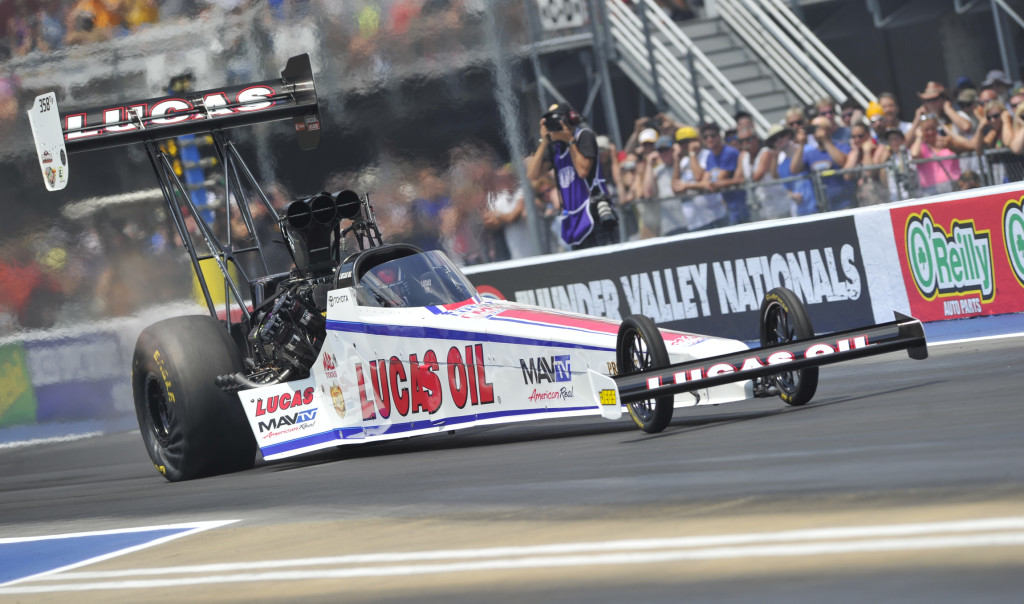 It was also an NHRA Father’s Day celebration in the winner’s circle as all the champs honored dear old Dad and the role he played in each driver’s career. 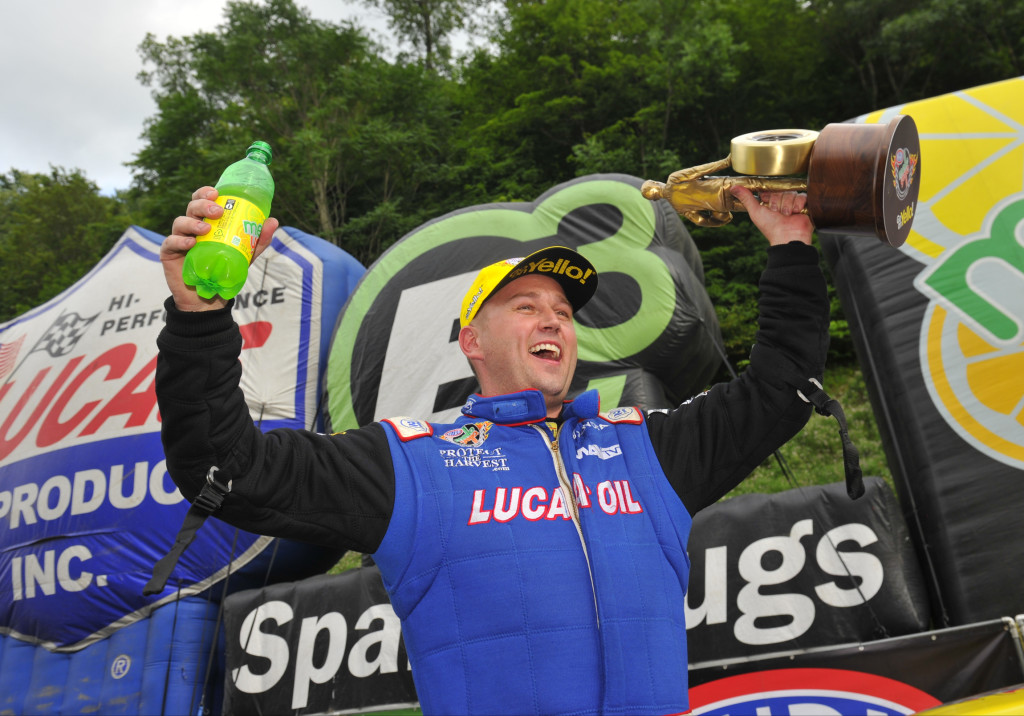 Crampton made a string of 3.8-second passes driving by Top Fuel’s best to secure his third victory of 2015, the fifth of his young career and his first in Bristol.

He also knocked off past Top Fuel champion Larry Dixon in the final round for the third time this season.

“It’s huge to win at this historic racetrack,” Crampton said.  “This has always been one of my favorite racetracks to come to as a crew member and now as a driver.  In all honesty, it’s never been that good to Morgan Lucas Racing.  We’ve struggled here in the past with Morgan, so to get a win here and turn all that around is just huge.”

He had a bit of a secret weapon Sunday: daughter Emma came to the track with Crampton’s partner Stephanie Laski and was around to celebrate in a soggy winner’s circle.  Dixon has had success on Father’s Day in the past with six wins, but this Sunday was Crampton’s day.

Three of the four drivers Crampton beat en route to the Bristol title were past Top Fuel champions: Antron Brown in the first round, Shawn Langdon in the second, and Dixon in the final.

“I can’t say enough about Aaron Brooks,” Crampton said.  “We struggled a little bit in qualifying and lost the night run Friday night and had an issue in Q4, so we started from No. 11.  That was a little daunting to begin with, especially when you’ve got to race Antron in the first round, but obviously it all worked out.”

That put Crampton against Dixon in the final for the third time this season.  Crampton beat the three-time champion in Las Vegas and Topeka, Kan., so the odds favored Dixon.  But Crampton’s run of 3.884 seconds at 321.04 mph overcame Dixon’s slowing 4.004-second pass at 250.41 mph.

Brooks and the Lucas Oil team have been up to the task in 2015, winning three times to match Brown for the most in the class.  Plus, Crampton moved into third place in the points standings after 11 races.

“We all know Aaron Brooks can swing for the fence when the weather’s cool,” Crampton said.  “You saw that earlier this year in Topeka.  He’s been working on this hot-track race car package, and obviously it’s been working out really well.”

Brown is the Top Fuel points leader with a two-point lead over DSR teammate, Tony Schumacher. (826-824). 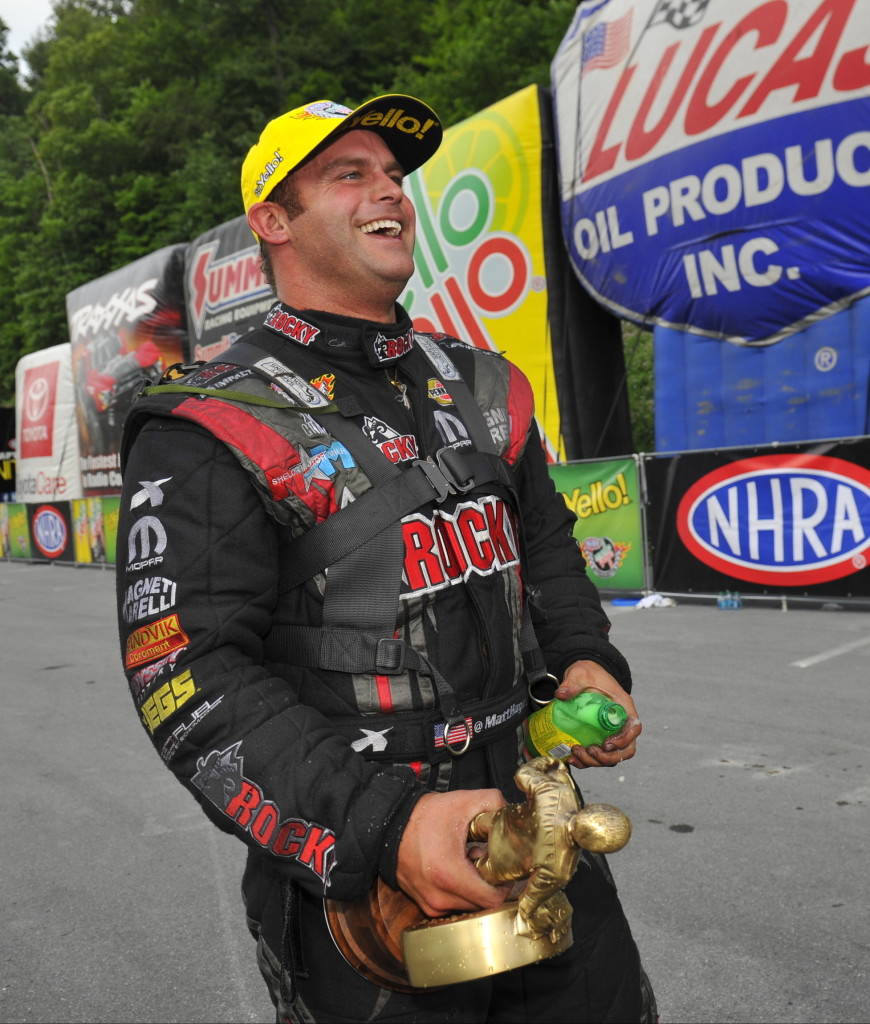 Just two hours from his home in Christiansburg, Va., Bristol’s Thunder Valley Nationals looms large for Matt Hagan. He’s had his eye on a win there since he started his Funny Car career seven years ago, a story with a happy ending after  qualifying second for Sunday’s eliminations with the team led by crew chief Dickie Venables.

“This is just such a special race for me, I’m two hours down the road and I have so many friends, so many family members out there,” said Hagan.  My mom and dad came out; my wife brought my kids Colby and Penny.  It is so, so special.  I’ve been wanting to win Bristol for a long time because we are so close to home and I consider it my home track.  It’s nice to be able to pull down four win lights and hold up a Wally trophy at the end of the day.”

Matt also shared the win with his race family – the nine-man crew led by Venables and assistant Michael Knudsen – that braved temperatures in the 90s and high humidity. 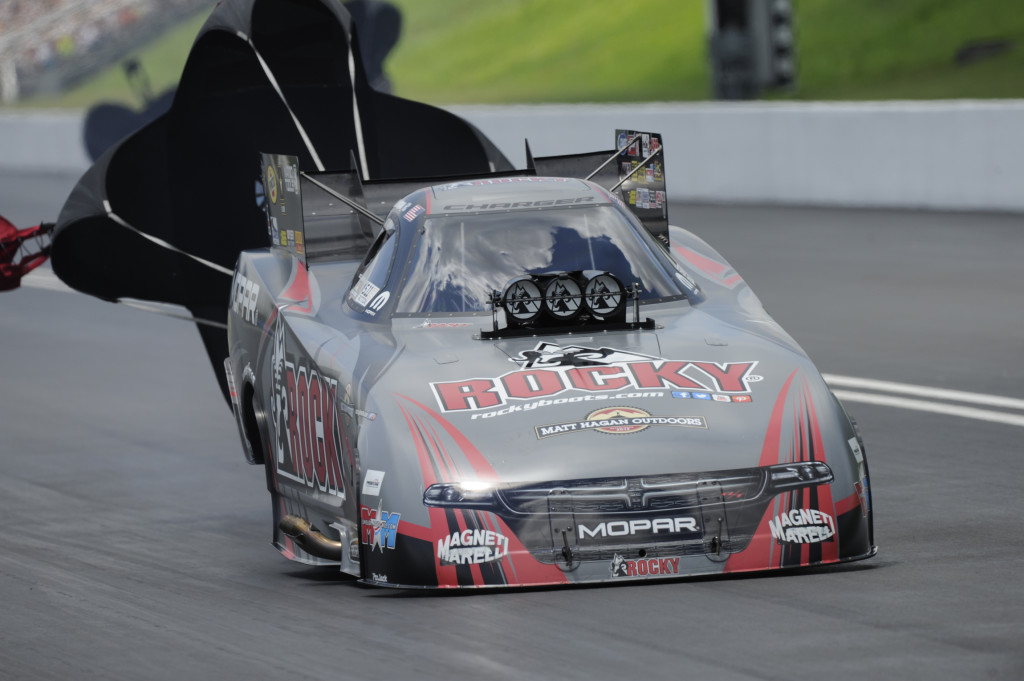 “The competition in Funny Car is phenomenal right now,” Matt said.  “I pinch myself knowing we’ve won four races out here already this year and there’s still so much racing left.  It’s so tough.

It was the 18th win of Matt’s career which moves him into a tie for 10th on the all-time Funny Car wins list along with NHRA legends, Ed “Ace” McCulloch, Mark Oswald and Tim Wilkerson.

“That’s incredible,” said Hagan grinning.  “It’s because of the people around me that I’ve been able to do that.  DSR is such a great place and they’ve given me this opportunity. I’ve had a good team around me my entire career.”

With the Thunder Valley win, this DSR Mopar team extended its points lead to 87 over Capps in second.

“Honestly this is up there like winning Indy for me,” he said.  “I care that much about it; I wanted to win it that bad.  It gives me chill bumps talking about it.  This is a huge race for me and to have my family out here on Father’s Day; it piles on top of each other.  It’s so, so special and something I’ll remember the rest of my life.” 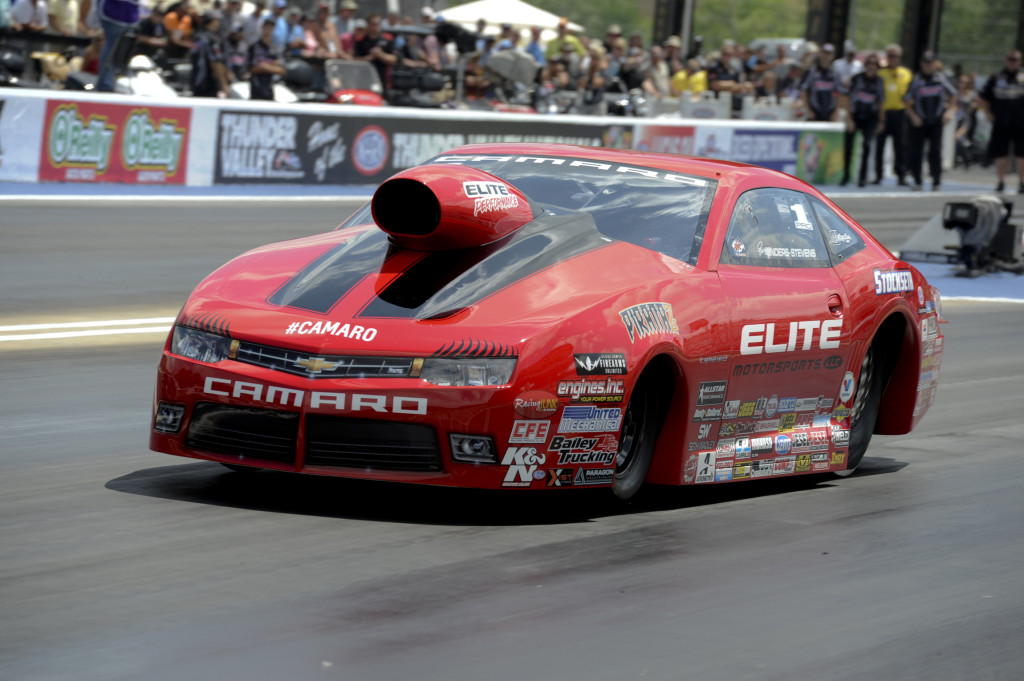 Erica Enders-Stevens won her second Pro Stock race in a row in Bristol and reached her fourth final round in the last five races.

“It’s always been good to me,” Enders said. “I guess every driver has tracks where they go that no matter what you do wrong, it ends up right.  But today we earned it.  We made really good runs for the heat; it was really hot and tricky out there.

Crew chiefs Rick and Rickie Jones and Mark Ingersoll guided Enders to four quick passes, and she was sharp behind the wheel.  She beat John Gaydosh, recent nemesis, Jason Line and Shane Gray in the semi-finals before lining up against Chris McGaha for the Wally.

Enders scored her 16th career victory and her fourth this season, taking over the Pro Stock points lead in the process by 16 points.  She had reaction times of .027, .017, .007, and .025 in another brilliant driving display under pressure. 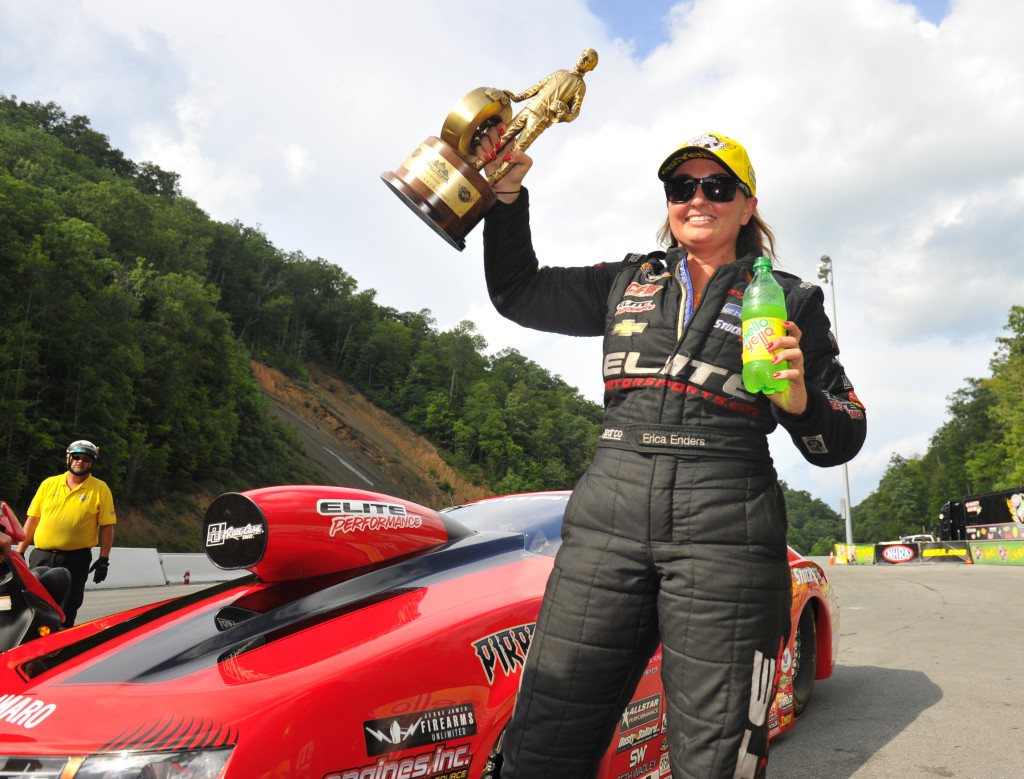 “You have to learn to win, and that’s something I never understood until we did it,” Enders said.  “Greg Anderson and Jason (Line) had mentioned that to me when I was first starting, and I didn’t get it until we finally did it.  You just learn how to handle yourself in those high-pressure situations.  It’s a challenge, for sure, and you’ve got to remain positive in your thoughts, and that’s been a huge part of our success.”

The NHRA regulars have the next weekend off before heading to Norwalk, Ohio on July 2 – 5 for the running of the Summit Racing Nationals at the Summit Motorsports Park.