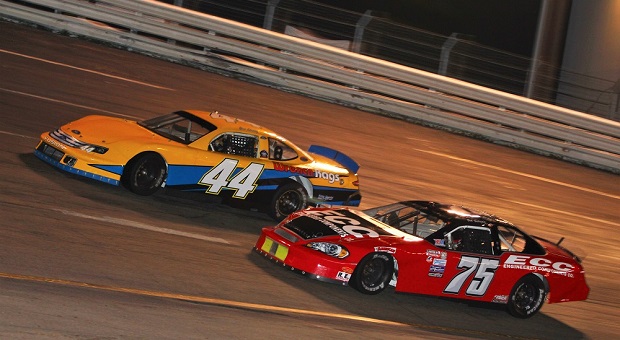 Only a single yellow flag slowed the field for 100 laps of Super Cup Stock Car Series racing, but the 18 drivers in attendance gave their fans a spectacularly fast and exciting competition at Lonesome Pine Raceway on Saturday night.

Brad Teague, former track champion at the facility, and current points leader Jim Crabtree Jr. both started from the front row for the Extreme Awards & Personalization/Patrick Miller Photography Twin 50 presented by United Tire after a six car redraw.  Crabtree, fast qualifier in his only Lonesome Pine SCSCS start back in 2008, grabbed the early lead from the outside line in his No. 63 Jim’s Automotive/Judy’s Apartments Chevrolet.

Bob Schacht, back on the 3/8-mile track for the first time in over 30 years, was Crabtree’s main challenger in the No. 75 Engineered Components Chevrolet after earning his first career SCSCS Pole Award earlier that day.  The only caution of the night flew when Brian Harrison lost power on the frontstretch, bunching the field for the restart.

Crabtree and Schacht ran side by side for numerous laps, courteously giving each other enough room.  The outside line prevailed at the start-finish line each time, and Crabtree won his first SCSCS victory since 2013. The Muncie, Ind. driver earned his place not only for his work on the track, but in the pits between practice sessions after battling an extremely tight car in the afternoon. 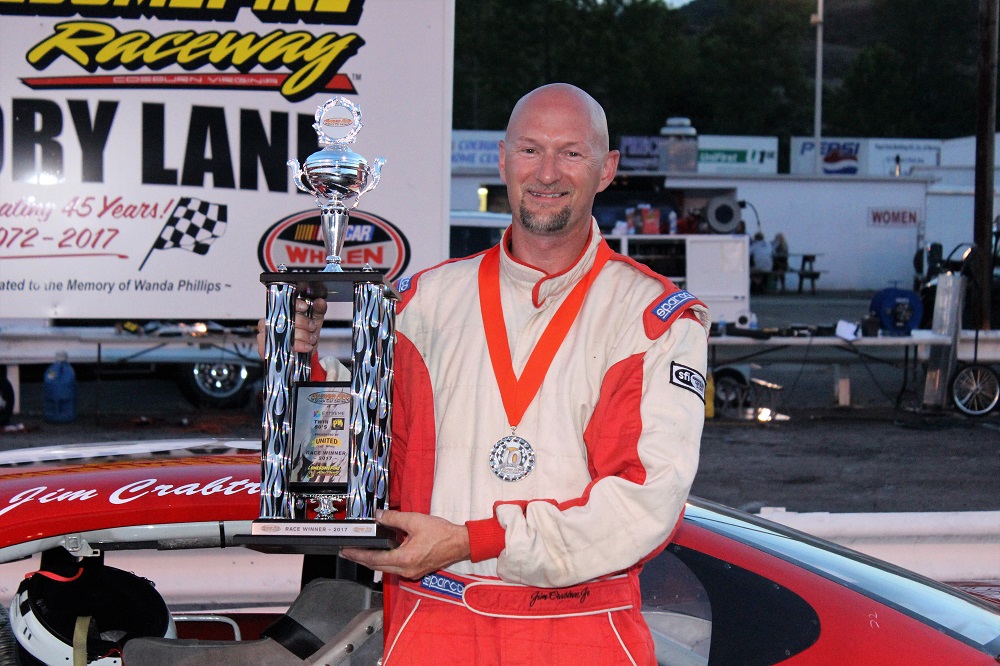 Schacht took second while the most recent winner from Jennerstown, Brent Nelson, rounded out the podium in the first race. For the second Twin 50, fourth place finisher Ben Ebeling pole position with fifth place finisher JP Crabtree starting alongside.

Ebeling had the advantage from the start in the No. 44 Wrench Rags/Custom Graphics/Battery Specialists Ford, prepared by the Potter Racing shop.  Last year’s Lonesome Pine winner had to duel with Schacht, who quickly reached the runner-up spot. Ebeling led by a nose at the line in the early laps during their intense but respectful battle.

A few laps later, Crabtree moved into second position, trying to out-maneuver Ebeling for the top spot.  The 50-lap event went caution-free, so slower traffic had the potential to play a factor in the result.  In the closing laps, the two frontrunners caught up to the tail end of the top five, where Nelson, Brian Harrison, and Harvey Harrison all were attempting to finish as well as possible. Crabtree was boxed in with only a few circuits remaining, letting Ebeling pull a few car lengths ahead for his second career SCSCS victory. 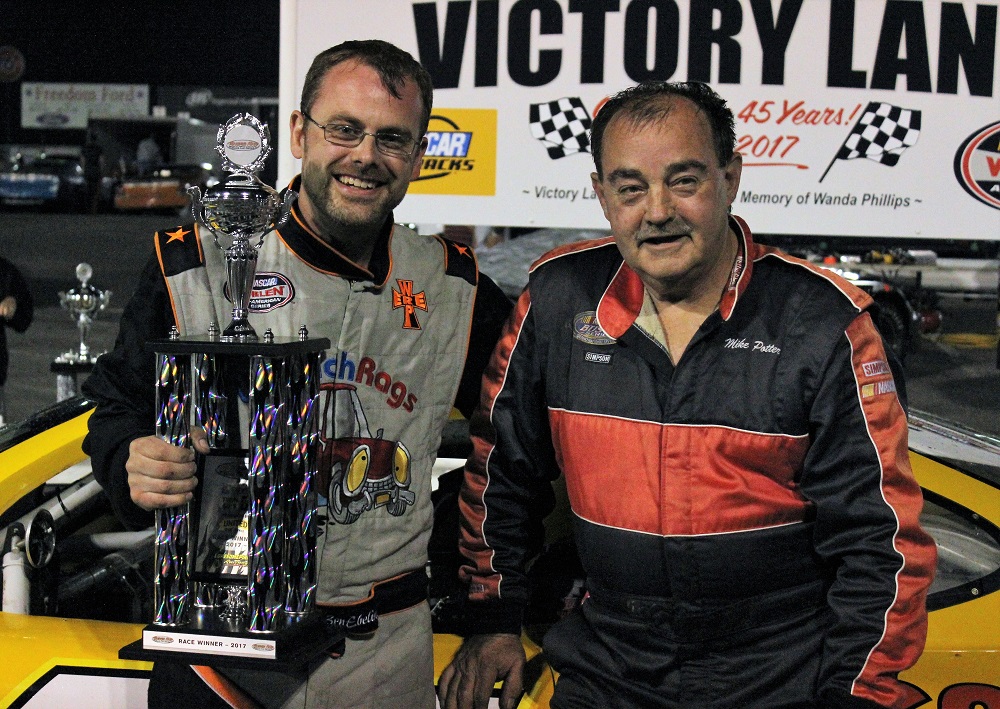 “I didn’t think we had the car for it today, but the guys kept working on it,” Ebeling admitted.  “We made some changes before the second race and my crew chief made a judgement call that could have gone either way and luckily we made the right decision.  I’m just thankful to the guys for racing me clean so that we could get a good finish.”

A year ago, Ebeling worked his way to the front in the second half of the race when the car came to life.  2017’s win was a slightly different story with the same positive result.

“It was all about track position,” Ebeling continued.  “The high line comes in the longer you run, so I knew that second 50 would be where I could come on a little bit better.  Last year in that 75 lapper it was around lap 40 that it really came on strong so I kind of knew that was going to be the thing today.”

Crabtree had to settle for second in the race that concluded the night for SCSCS, but was still pleased.

“I had tires on it from Midvale that probably had 150 laps before the first race,” Crabtree noted regarding the durable American Racer rubber.  “We did a good job hanging on and it was a good race.”

Schacht held on for third, coming up just short of the win in both races despite trying to loosen up his car.

“It still was tight, but we took some diagonal and stuff out of it and that just lost all its forward drive off the corner and I just spun the tires,” Schacht mentioned.  “It’s in one piece; Engineered Components will come back and do it again.  Fastest car doesn’t always win, right?” 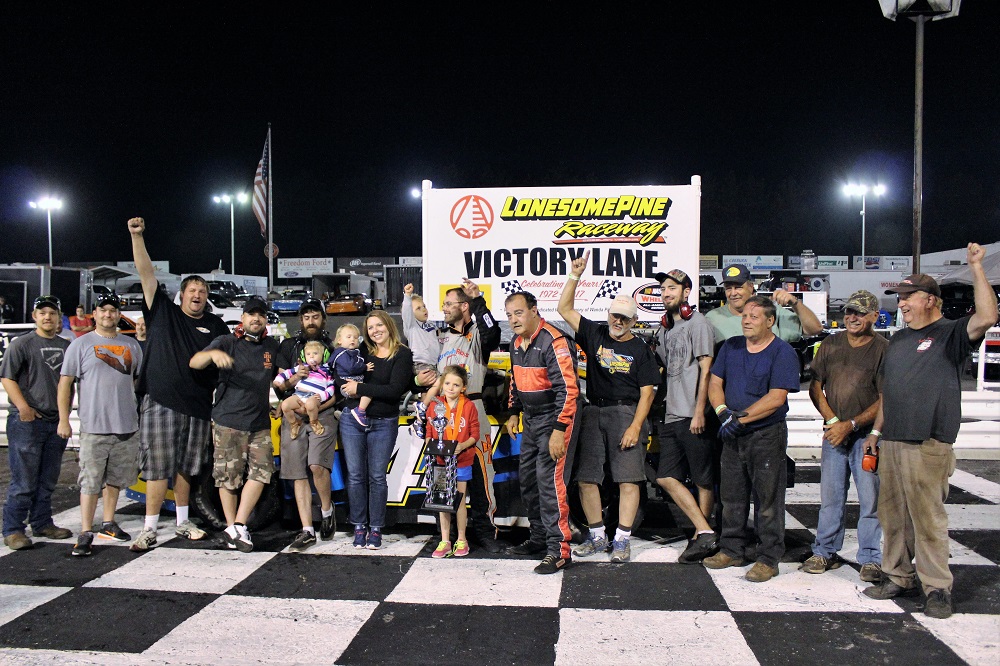 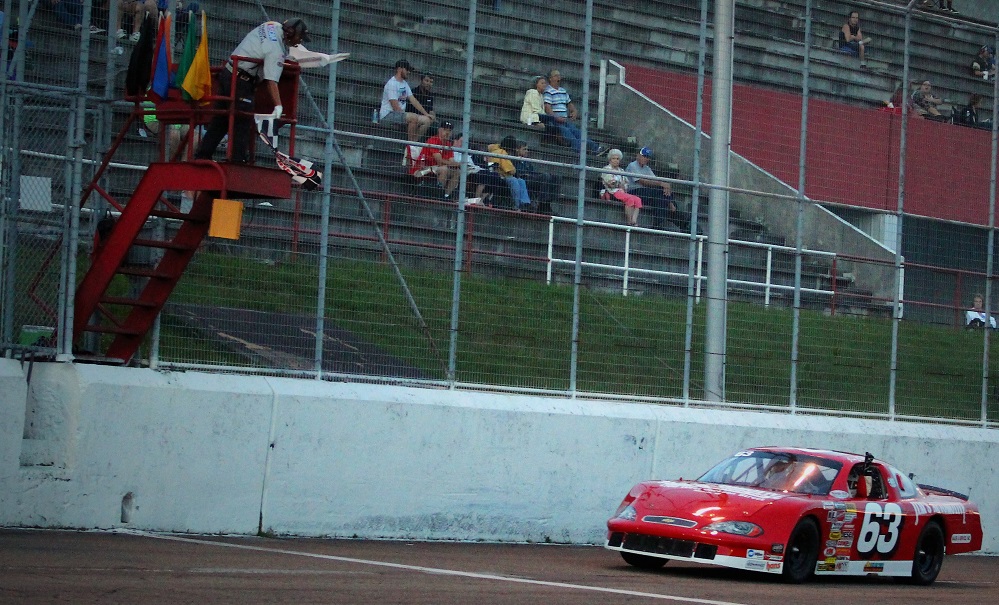