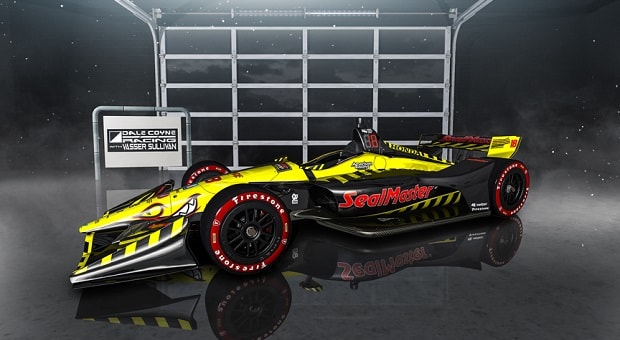 Jimmy Vasser looked so out of place during the 2017 Verizon IndyCar Series season. With the dissolution of KVSH Racing, the Chevrolet-powered Indy car team co-owned by Vasser, Kevin Kalkhoven and James “Sulli” Sullivan, Vasser had nothing to do at the races for the first time since, well, since he started racing quarter-midgets as a kid.

That changed the first Monday of February, when an announcement heralded a new partnership for the IndyCar series: Dale Coyne Racing with Vasser-Sullivan will compete in the series with four-time champion Sebastien Bourdais, securing primary sponsorship from leading pavement sealer company SealMaster. Bourdais continues to drive a No 18 Honda-powered Indy car under the new nomenclature.

Coyne called the idea of partnering with Vasser and Sullivan “very enticing. They’ve had a lot of success in their previous years in INDYCAR, and I’m thrilled to have them as partners. It’s an opportunity I couldn’t turn down as we move forward with this program. We’re excited to get the season going with SealMaster onboard as a co-primary sponsorship and, hopefully, we can continue the success Jimmy and Sulli have had, and that we’ve had with Sebastien.”

Coyne will continue to field the No. 19 Honda under the Dale Coyne Racing banner, he said. A driver has not yet been named as “contract talks are still ongoing,” the team said.

SealMaster has signed up to be primary sponsor for nine of the series 17 races in 2018. The company, which is also active in NHRA drag racing as a primary sponsor for Kalitta Motorsports’ on Richie Crampton’s Top Fuel dragster, will be primary on Bourdais’ Indy car for some of the series’ premier events: at the season opener in St. Petersburg where Bourdais is the reigning champion, the Toyota Grand Prix of Long Beach, Barber Motorsports Park, in the 102nd Indianapolis 500 and a week later at both Duels in Detroit, at Elkhart Lake at Road America, and on Pocono Raceway’s and Gateway Motorsports Park’s ovals. SealMaster serves as associate sponsor for the other eight races.

“I took a year off from competition for the first time in many years,” Vasser said of the partnership, “and realized how much I missed it. This is the next chapter in my racing career, so I want to say thank you to Sulli, Dale, SealMaster, our sponsors and Sebastien. With their support we are focused on re-creating our prior success and again challenging for wins in 2018.” As KVSH, Vasser’s co-owned team won the 2013 Indy 500 with veteran Tony Kanaan, an exceptionally popular victory; they won five additional races over the next three years (2014-2016) with Bourdais driving their Chevy entry.

This is Sebastien Bourdais’ 13th season as an Indy car driver and his third with Dale Coyne Racing. The 38-year-old from Le Mans, France – currently living in St Petersburg, Fla. – has made 171 career Indy car starts, earning 36 victories (sixth all-time) and 33 pole positions, which ties him for seventh all-time. Acknowledging the partnership has been in the works for more than a year, he said, “This is a team that started small, but what we needed and now have, collectively, is a consistent program from top to bottom. We can compete at the highest level and contend for a championship.”