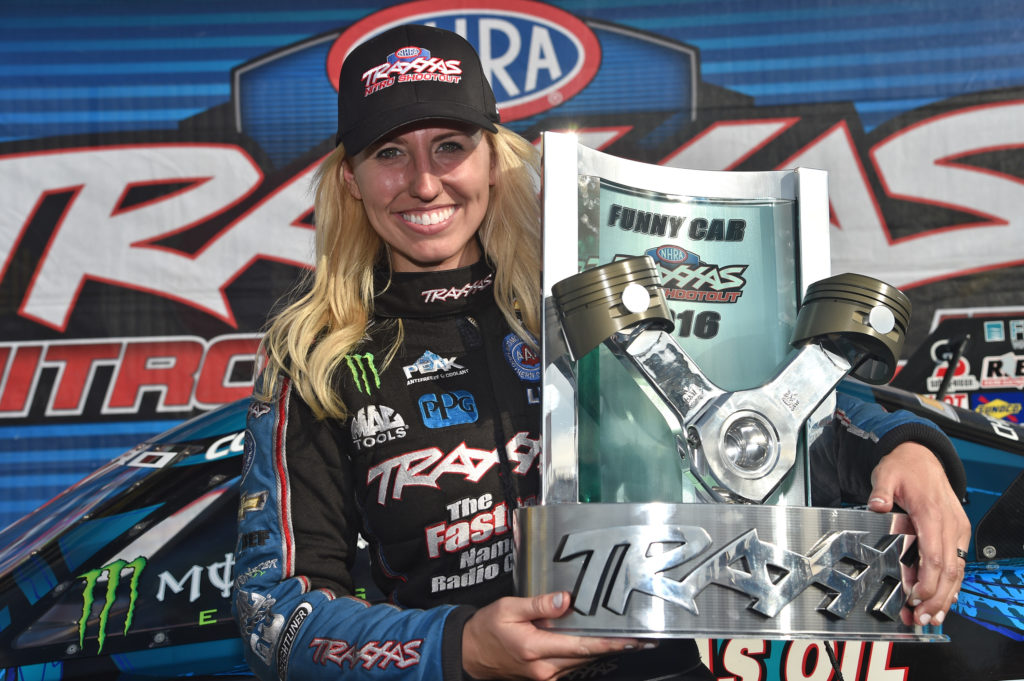 Photos courtesy of Richard Shute/Auto Imagery, Gary Nastase Photography, and Ron Lewis, for media use only.

Courtney Force wrote her name into the Funny Car history books once again at the 5th annual Traxxas Nitro Shootout at Lucas Oil Raceway at Indianapolis. Force, racing in her first specialty race final round, barely outran teammate and now three-time runner-up Robert Hight in an all-Chevrolet Camaro SS Funny Car final. Force’s winning time of 4.018 seconds held off Hight’s 4.596 second run. Both JFR Funny Cars were powering down the track and shredding their blower belts from the enormous power created by the 10,000 horsepower motors.

“Dan Hood, Ronnie Thompson and the guys gave me a great car. My belt was shredding down there at the top end and I was just waiting for Robert to drive around me but we were able to get the win,” said Force.

The Traxxas Chevrolet Camaro SS Funny Car, the No. 2 qualified Funny Car, started the day with a first round win over Alexis DeJoria in a close side by side race. Force was smooth and quick down the left lane and lit up the scoreboards with a winning elapsed time of 3.912 seconds at 327.66 mph over DeJoria’s 3.961 at 325.45 mph. 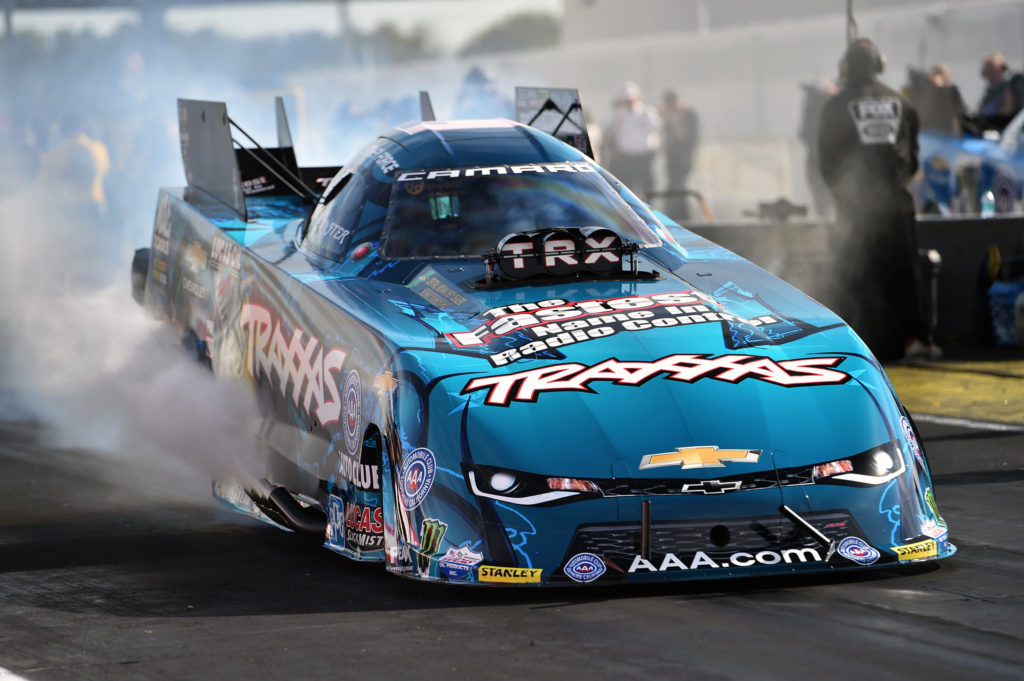 In the race of the day, Force blasted to the finish line with a 3.926 second run at 323.58 mph and got to the finish line .002 seconds in front of Hagan’s 3.941 second, 324.83 mph run. The race set up the second all JFR Traxxas Nitro Shootout final round with teammate Robert Hight. Two years ago John Force scored his second Traxxas Shootout win over Hight in the first all JFR Shootout.

Hight won his first round Traxxas Nitro Shootout match-up with Tommy Johnson Jr. with a 4.070 second run in the right lane. He was scheduled to race Ron Capps in the semifinals but the 2012 Traxxas Shootout runner-up was unable to repair his Funny Car after driving it into the sand trap in his race against John Force.

In the semifinals Hight took a competition bye and ran down the left lane. His Auto Club Camaro appeared to be down on power as he crossed the finish line with a win light and a pedestrian 4.116 second elapsed time. He gave up lane choice to Force and had to settle at the end of the day with being the only three-time Traxxas Nitro Funny Car finalist.

Eight-time specialty race winner John Force lost to No. 1 qualifier Ron Capps right after his youngest daughter won the first round. As Capps crossed the finish line it became obvious his parachutes were not deploying, and the veteran driver ran into the sand trap and flipped his NAPA Funny Car. Capps emerged unharmed but his team evaluated his chassis and ultimately decided it was in the best interest of safety to pull out his back-up Funny Car and forgo his semifinal run against Hight.

Courtney Force will head into the Chevrolet Performance U.S. Nationals looking for her first win at the most prestigious race on the Mello Yello Drag Racing Series. She will start as the No. 4 qualifier. The 2012 rookie of the year will race Jim Campbell, who she defeated earlier this year in Denver. Currently Force sits in the No. 2 position in the Mello Yello points standings heading into the last day of the NHRA regular season. The points will be reset before the Charlotte NHRA National event in two weeks. Force’s qualifying time of 3.867 seconds is less than a tenth of a seconds off the quickest run of No. 1 qualifier Matt Hagan.

Just a few spots behind the youngest racing Force sits four-time U.S. Nationals winner John Force in the No. 6 qualified position. The 145-time national event winner solidified his position with strong runs today including a 3.910 second run in the fifth qualifying session that was the quickest of all the Funny Cars in the heat. 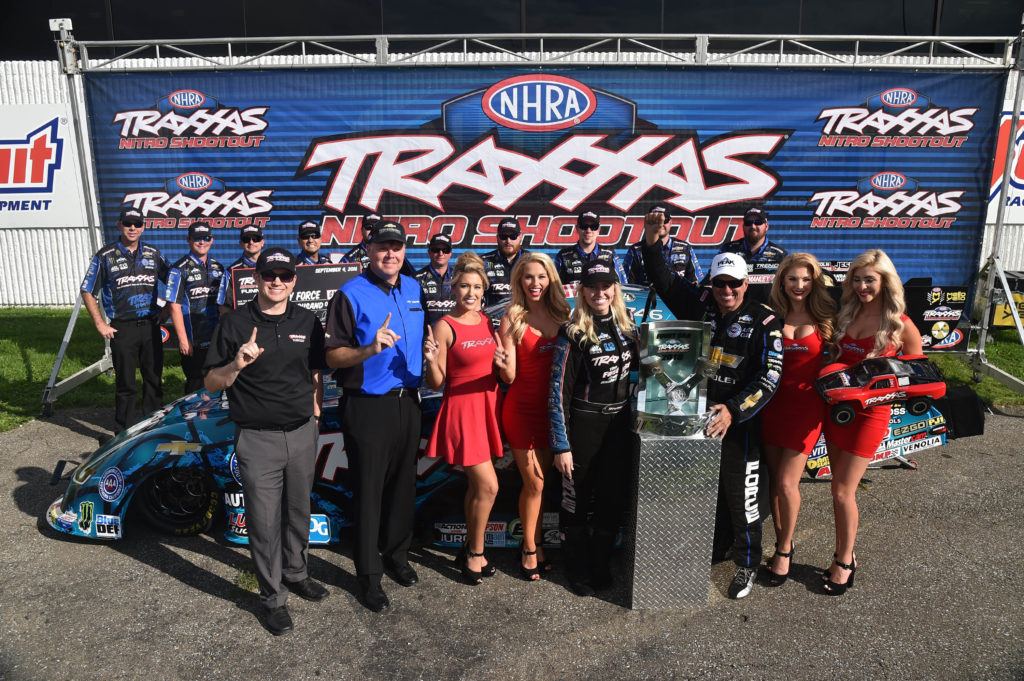 “I found myself again with two family members racing each other. I had Robert Hight in one lane, he’s my son-in-law, and Courtney was in the other lane. I stood in the middle and they blew my hat off,” said Force, a proud team owner.  “It was just Courtney’s day. Daniel Hood and Ronnie Thompson, all these guys had their stuff together today… In the final it was a race that anyone could have won. Robert got loose and Courtney got loose. We got the win.”

Force will race Chad Head in the first round.

“It was great to see two Chevrolets in the Shootout final. It couldn’t have been any better,” added Force. “I am excited about going into tomorrow. It’s Indy, the biggest race.”

The final Chevrolet Camaro Funny Car of the JFR trio, Robert Hight will go into race day as the No. 8 qualifier and will race Tim Wilkerson in the first round. Hight is encouraged with the information his team learned today even if the result might not have been reflected on the scoreboard.

“My crew chief Mike Neff said a few tweaks here and there and we will be right where we need to be for race day. I think it will run good and we will be competitive. I want to congratulate Courtney and I know we were close, very close in the final, to making a full run but we just couldn’t make it happen,” said Hight.

Brittany Force and the Monster Energy Top Fuel dragster closed out the final qualifying session of her fourth Chevrolet Performance U.S. Nationals with a statement run. The scoreboard flashed her elapsed time of 3.762 at 323.43 mph. A few minutes later the three-time 2016 winner was awarded the three qualifying bonus points as the quickest Top Fuel dragster of Q5. She will go into race day in the No. 3 position. 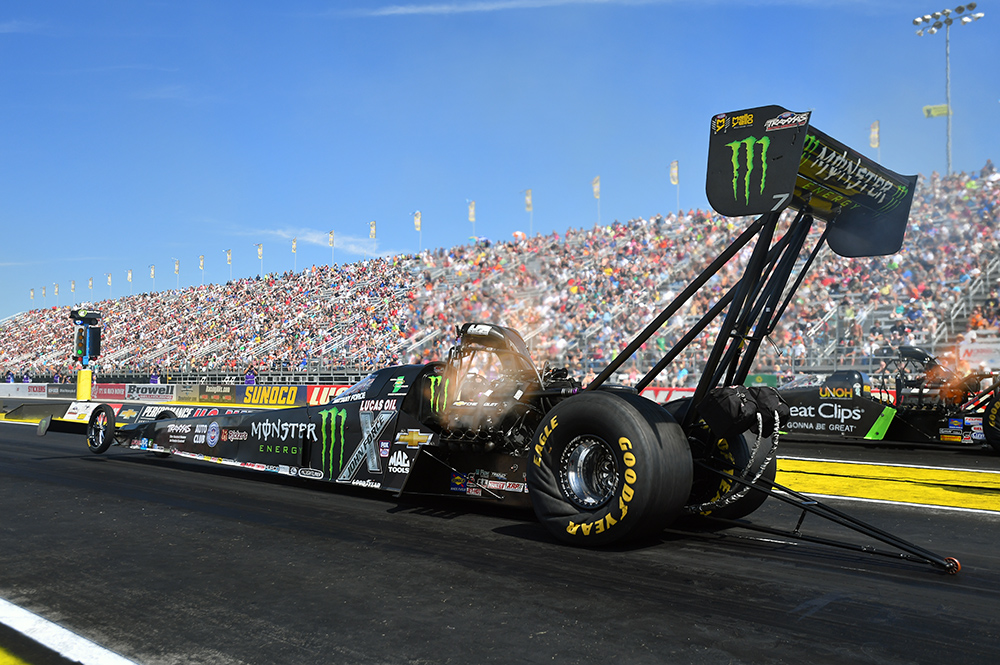 “No. 3 position is an awesome place to be. This is Indy and everyone is throwing down trying to get in the show and put some killer runs on the board, and to be No. 3 I’m very happy and we’re going to go after it tomorrow,” said Brittany Force.