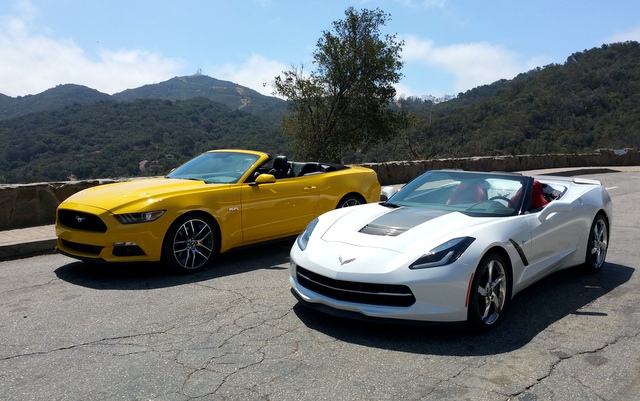 It’s no secret that Southern California is the largest market for convertible cars, especially when there’s usually only two seasons, summer and almost-summer. Buying a droptop is a no-brainer so the question always comes down to deciding which manufacturer gets your money. And the toughest decision of all-time is still “Corvette Convertible or Mustang Convertible?” 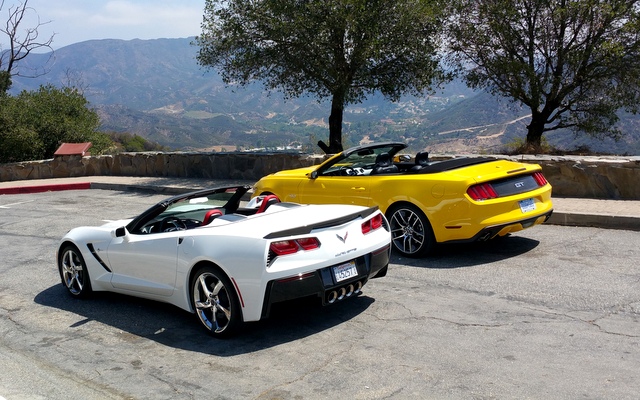 During this year’s Droptops & Dirt event, organized by the Motor Press Guild, I was given the opportunity to drive both cars along the famed Mulholland Highway in Malibu, California and attempted the daunting task of choosing my favorite. 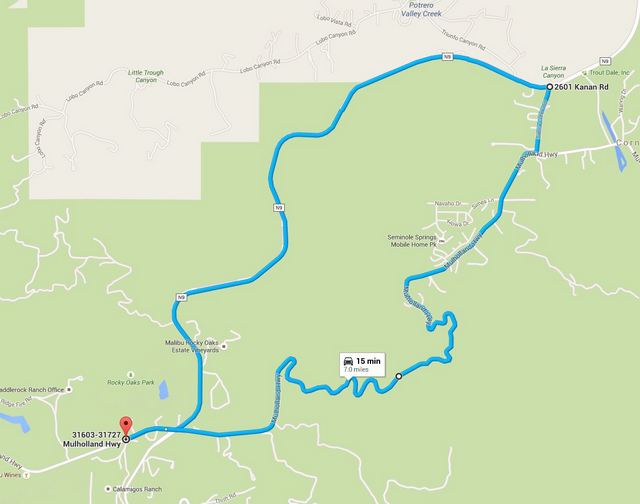 The route would take me through a series of tunnels on Kanan Dume Rd. and back down Mulholland through a section nicknamed “The Snake” where many cars and motorcycles have crashed. 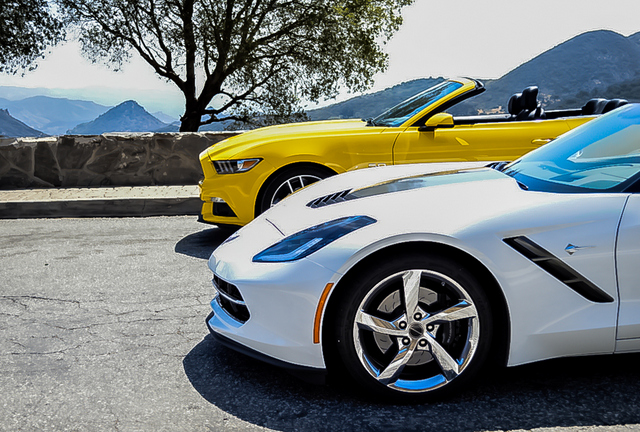 First up was the Corvette Stingray Convertible with a Z51 performance package and 8-speed automatic transmission. In its default driving mode, the Corvette is very relaxed and unassuming; something that just about anyone could drive without complaint. But I wasn’t interested in the lazy daisy setting so I changed the drive mode to Track and bumped the shifter into full manual. The steering and suspension immediately tightened up and the exhaust note became more lively. 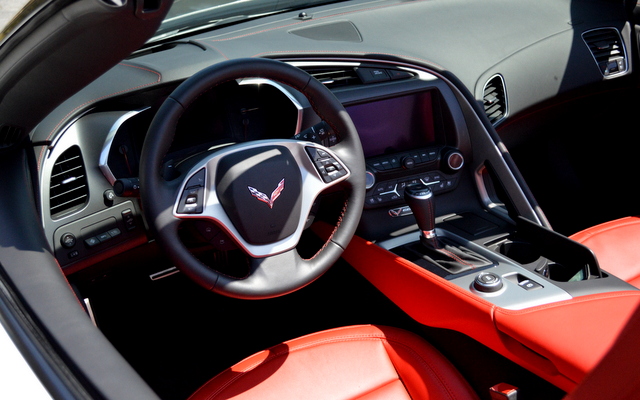 As the tunnels approached, I dropped down a couple gears and let the 455 horsepower engine belt out its song along with some very satisfying off-throttle pops. The Corvette felt light—which it really is at 3,362 lbs—and nimble through the tight corners of “The Snake”, carving its way around the switchbacks and banked corners with confidence.

Narrow and twisty two-lane roads aren’t the ideal environment for the Corvette with its wide stance and longer proportions, but the Magnetic Ride Control suspension helps to deliver a balanced and smooth experience. Even though I couldn’t pick up too much speed in the corners, the view from behind the wheel, overlooking the sloped hood and sculpted wheel arches, automatically brings an added level of excitement. 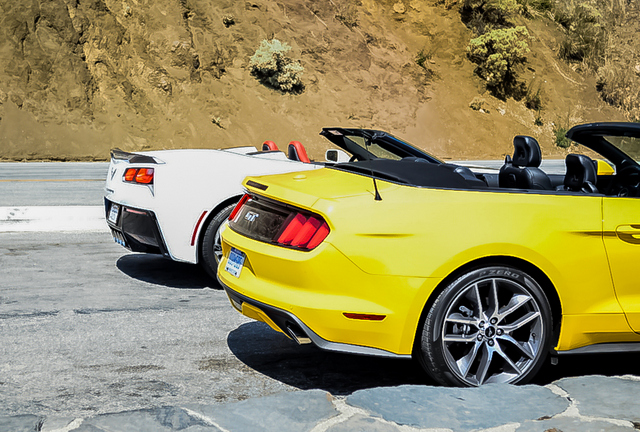 As I slid into the Mustang GT Convertible, a huge grin came across my face because this pony had a 6-speed manual transmission and I knew rowing through the gears would be a lot of fun. Heading out onto the road, the 435 horsepower V8 has nice low-end torque and a satisfying growl. The clutch pedal is relatively heavy, but the engagement point is smooth and forgiving, making quick launches easy. Four drive modes are available: Normal, Snow/Wet, Sport and Track, although the differences between Normal and Track are less pronounced when compared to the Corvette. 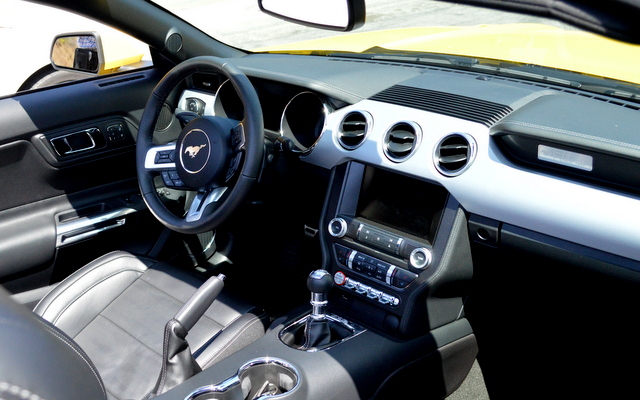 Taking the same route as earlier, I shifted into 2nd gear and gave it full throttle through the tunnel only to be disappointed at the lack of exhaust noise following behind me. I was really expecting much more of a roar, but received a marginally louder, muffled rumble.

Just like the Corvette, the Mustang is out of its element in the hills of Malibu, but I wasn’t any less confident in its abilities. It handled the turns just fine, though I could feel the rear tires working pretty hard to maintain traction. Its curb weight of 3,872 pounds, 510 more than the Corvette, probably has something to do with it.

Seating position in the pony car is higher and more forward than in the Corvette, improving front corner visibility and overall awareness of the edges of the vehicle. I felt more relaxed driving the Mustang thanks to its linear and predictable nature. If I was going to lose traction, I knew the rear-end wouldn’t suddenly step out from underneath me. 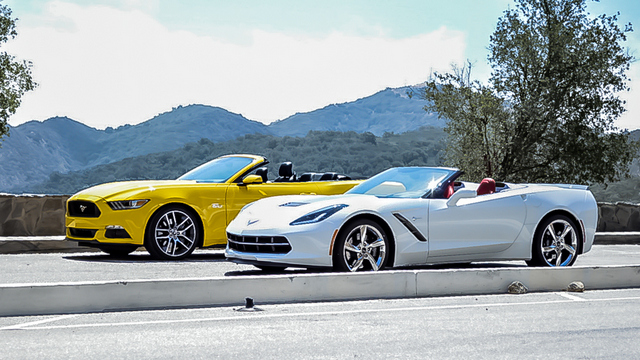 Overall, both cars are well-made, fun to drive and very competent. Each one shines in its own way and looks good while doing it. Personally, I’m more of a spirited driver than a beach cruiser so I would choose the Corvette over the Mustang for its handling capabilities and track-focused features. But honestly, you can’t go wrong with either car; it’s all about which one best suits your personality.