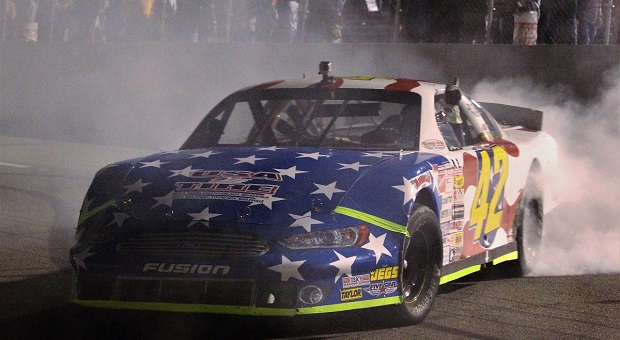 Brent Nelson picked up where he left off in July at the Pennsylvania 1/2-mile, but though he drew to start up front as well, the Petersburg, West Virginia driver would have some solid competition with which to contend. Codie Rohrbaugh, also of Petersburg, slide into second position early in the race.  After a few failed attempts, Rohrbaugh found a way under and led by a bumper on lap seven.  On the next circuit, contact was made coming out of two, requiring Nelson to check up and fall back to second.

From that point, Rohrbaugh cruised over the track for his sixth career SCSCS victory. All of his victories have come at Jennerstown, a fact in which the young racer takes pride.

“It’s special because the people around here, the management, the facilities; everything is top of the line,” Rohrbaugh remarked.  “It’s really cool to have all your wins at Jennerstown.” 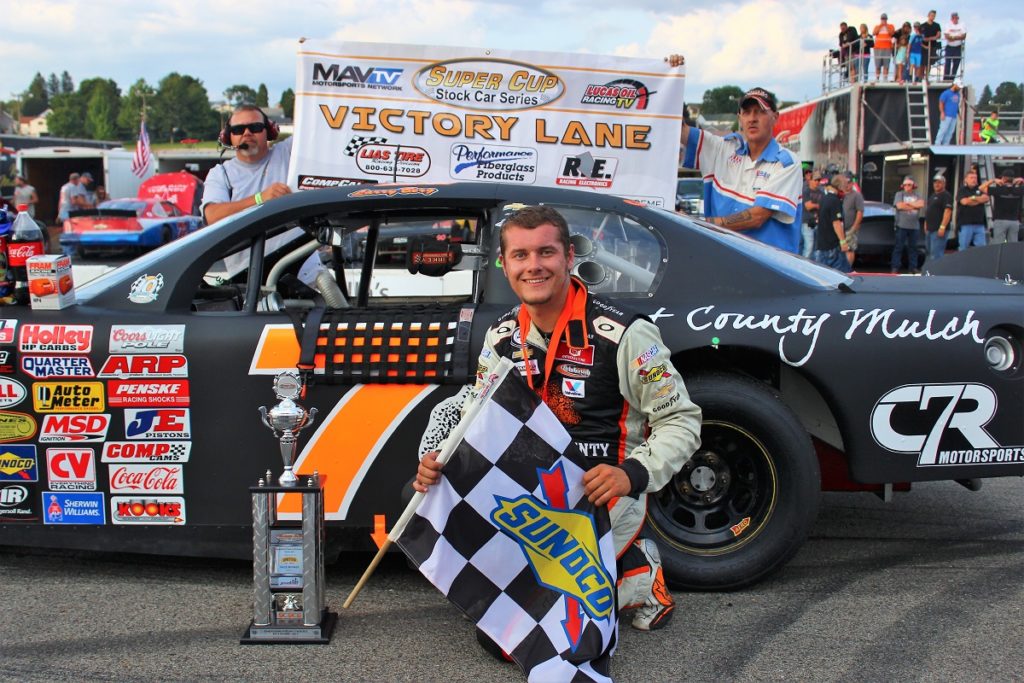 JP Crabtree and Jim Crabtree Jr. worked by Nelson for second and third; this was only the beginning of their night’s success.  The finish for Jim Crabtree Jr. sealed the Northern Division title up for the Muncie, Indiana driver. Now, he only needed to start the second Twin 50 in order to lock up the 10th Anniversary championship.

While Brian Harrison rounded out the top five, a sixth place finish and Nelson’s falling back from the lead allowed Lonesome Pine Raceway winner Ben Ebeling to claim the first ever Southern Division title in the Potter Racing No. 44 Wrench Rags / Custom Graphics / Battery Specialists Ford. 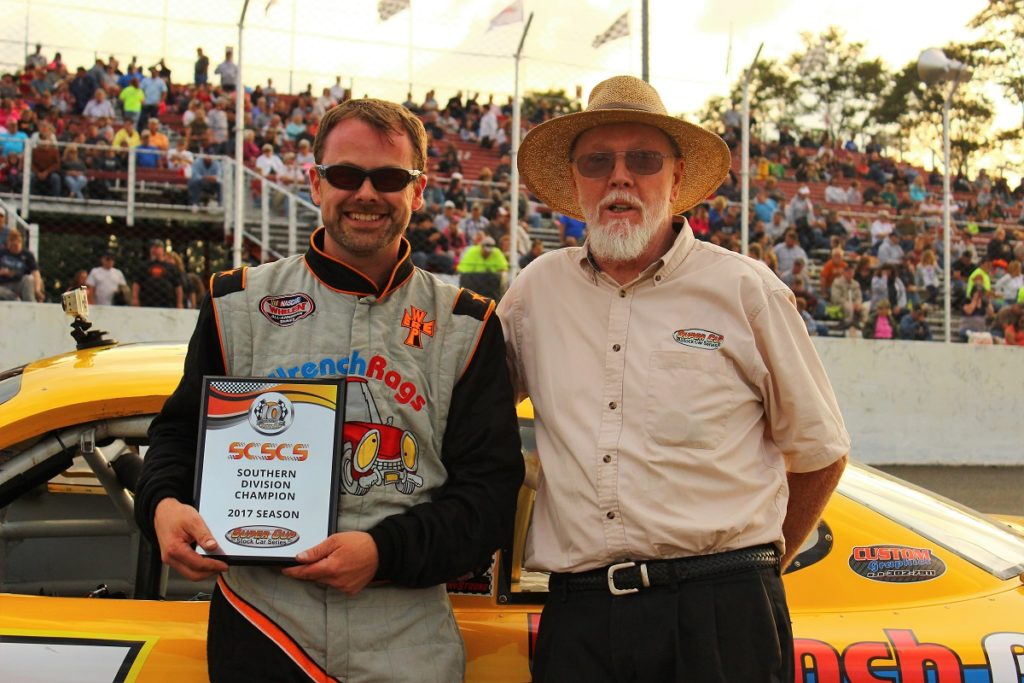 The second race win was completely up for grabs among the remaining drivers. Rohrbaugh chose to vacate the seat of his racecar, allowing grandfather Larry Berg to take his place for the next 50 laps.

“If it was up to me he would have driven the first race, but it’s what this is all about,” Rohrbaugh admitted.  “I get way more excited for Pap to drive than I do.”

Berg started from the rear of the field, giving the first of the redraw options to JP Crabtree.  The driver of the No. 42 USA Tire / For The Troops / J.R.’s Landscaping / Don Gnat Racing Ford randomly picked the correct pill and started from the pole in feature number two. After a fantastic four-wide salute to the fans during the pace laps, the green flag flew with Crabtree getting the lead on the opening lap. But Nelson, the relentless two-time winner from July, made a pass from the outside and kept the top spot for the next several rounds.

Son and father stayed right with Nelson for multiple laps before the younger Crabtree made his best bid yet for the lead a lap after halfway.  He won through, and sped onward to take the flag. 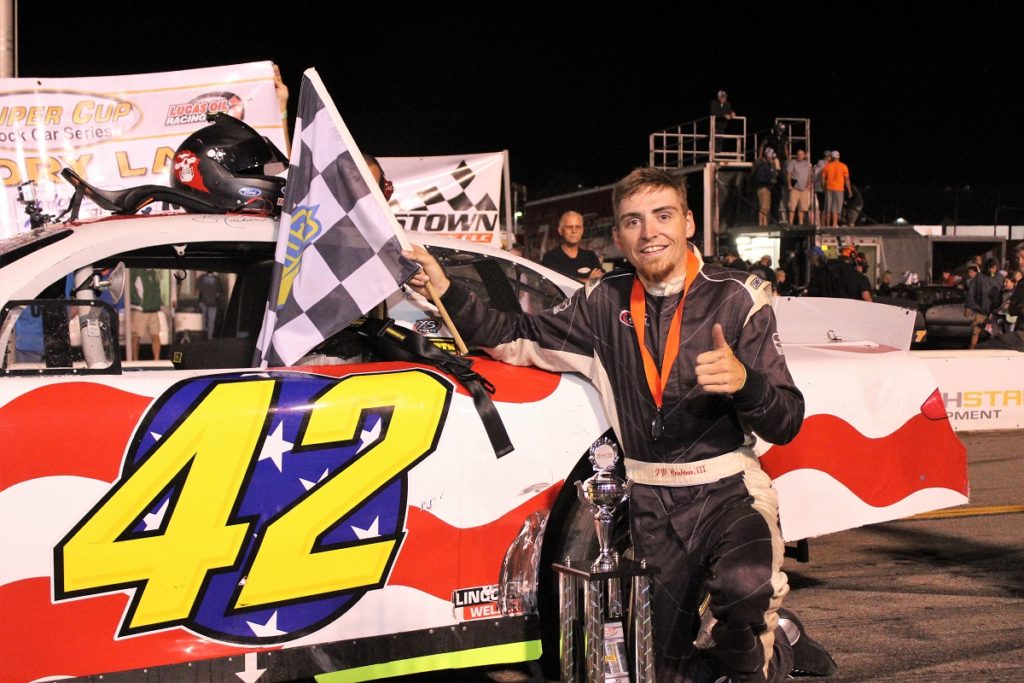 “I saw that Nelson was real tight in the center and I felt like if he would have just backed his car off just a little bit and try to get the car off the corner I don’t think I would have had anything for him. But he kept running the line he was running and I was just trying to capitalize where his car wasn’t too good.”

It also bookended the season in winners circle for car owner Don Gnat, who was victorious with 2016 rookie of the year Trent Gossar at the opening round at Midvale Speedway.

“I know Don’s thrilled,” JP Crabtree, who also locked up second in the overall standings, continued.  “He was on the backstretch on a couple of cautions giving me the thumbs up so I know he’s really excited.”

Jim Crabtree Jr. passed Nelson in the closing laps, locking in a one-two finish for the Indiana family that has supported the series since the beginning.  2016 champion Harvey Harrison finished fourth, while Berg climbed his way up to round out the top five.

Despite getting a few yellows late in the going, Jim Crabtree Jr. admitted not having anything for his son.

“It was probably a third place car both races,” the driver of the No. 63 Jim’s Automotive / Judy’s Apartments Chevrolet said.  “The first race was kind of trying to save it to make sure I made it to the second race, and the second race I wasn’t going to be able to beat JP.  His car was just turning so much better than mine.”

Nevertheless, for Jim Crabtree Jr. and family, it was perhaps icing on the cake having it all occur on the same night. 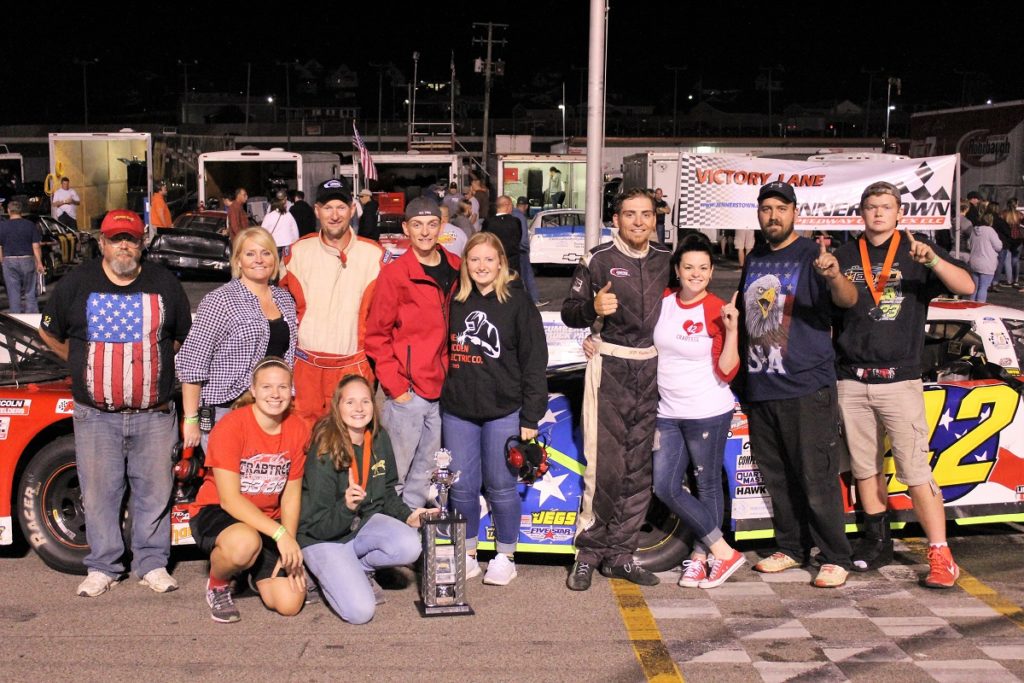 “That’s even better than me winning a race,” Jim Crabtree Jr. mentioned.  “For me to finish second and win the championship, the only other way I wanted it is if he would have won the championship.  I’m tickled to death.  It’s going to be a good ride home back to Muncie.”

The Jennerstown Speedway Twin 50s presented by United Tire will air at a future date on MAVTV, which premieres 2017 season episodes on Thursday, September 7. 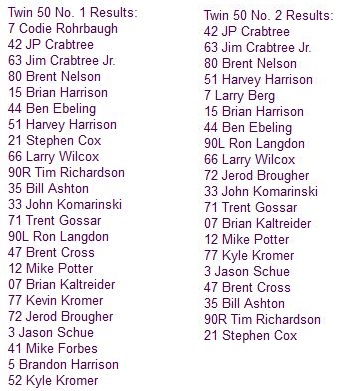