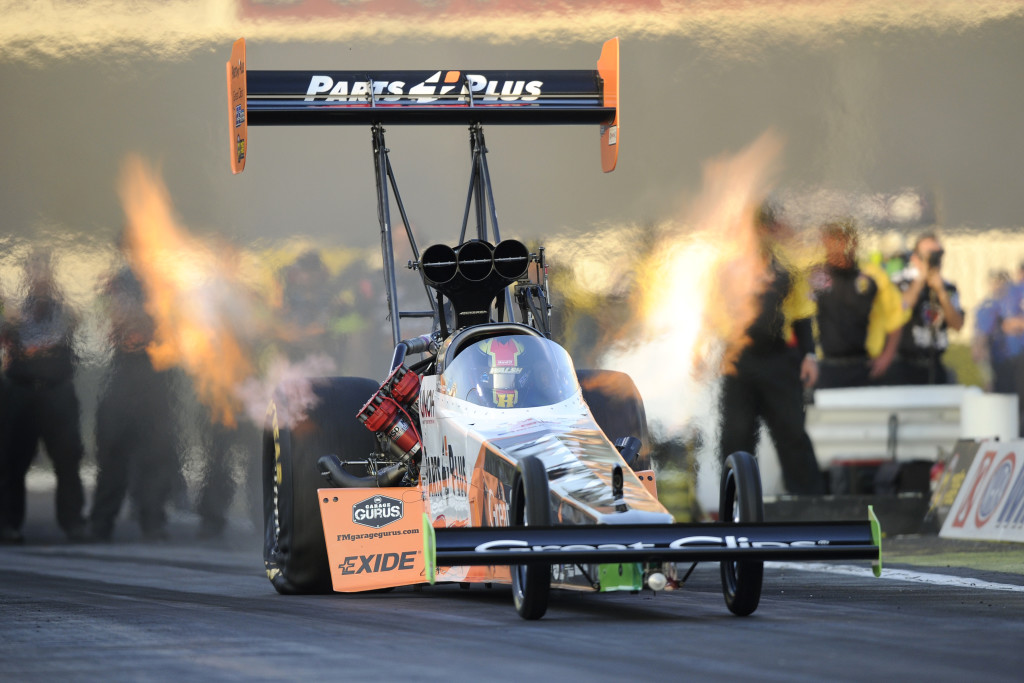 One of the NHRA’s fan favorite drivers is Clay Millican.  The personal Millican from Drummonds, Tennessee shows his southern hospitality naturally and race fans relate with his openness and welcoming personality.

Then there’s also that other side of him: the friendly and talkative Millican who will tell you that he’s also a verified fierce veteran in the NHRA Mello Yello Top Fuel series and to prove his point, check to see who’s fifth in the standings.  He’s ahead of J.R. Todd, Dave Connolly, Terry McMillan, Tony Schumacher, Leah Pritchett and Richie Crampton, being only 65-points out of the lead with Charlotte’s 4-Wide race up next weekend.

Crew chiefs of Millican’s Parts Plus dragster are former driver, David Grubnic and long time leader, Lance Larson.  Winning is definitely on the minds of these two as the producers of horsepower on the Doug Stringer Performance team.  Both are former winners and running a career best 3.722 second pass in Gainesville is definitely sending a message for other teams to take notice of this group.

“I’m going to give you Grubby and Lance’s game plan on their strategy to run this car this season,” said Millican.  “I drive it and Doug Stringer may own it, but they are still the coaches on the team.  Their goals are to hurry up, get that first win out of the way, and try to be in the top five in the points when the Countdown starts and so far, I would say, we’re on track. 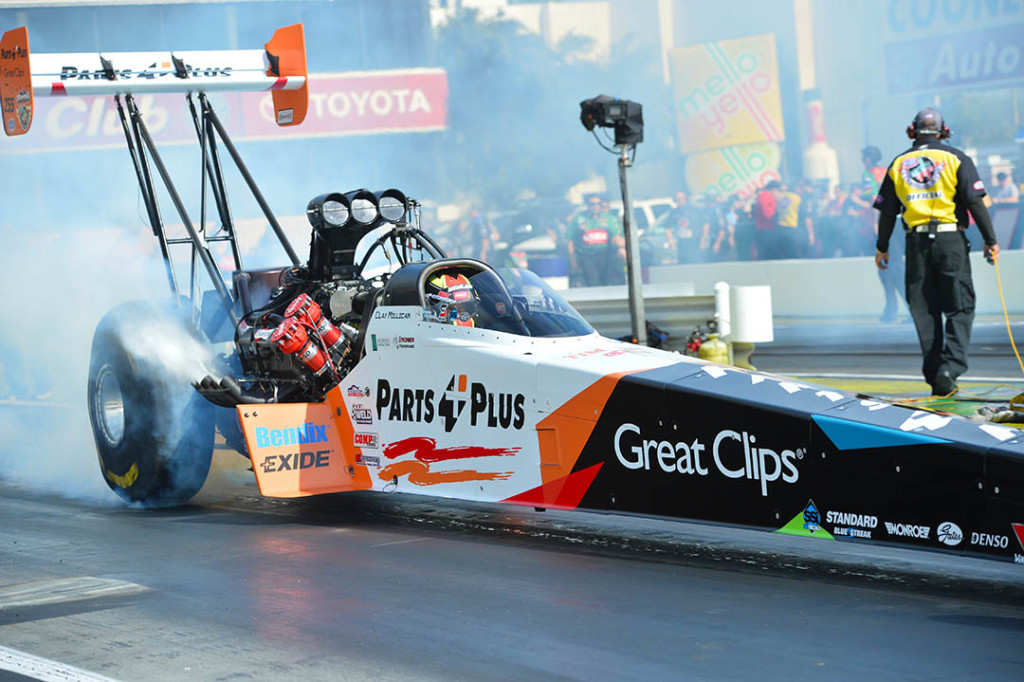 “We haven’t gotten that first NHRA win out of the way, yet, but its coming.  The car is running great.  Grubby and Lance are doing a super duper job and we already have had two semi-final finishes.  They would laugh at me because they want to get that first win out of the way and I would say ‘I will take semi-final and runner-up finishes all the way through Indy and then let’s just win the last six’.  See, that will take care of all of it, the championship and get that first win out of the way in one swoop, so to speak.  Seriously, I couldn’t be any happier with everything that has gone on so far this season.  This team is a year and a few months old.  We’re a single car team.”

Being a top five runner shows that his Stringer Performance team is consumed with doing well and it’s contagious throughout the whole organization.  According to Millican, it’s not how big your shop is, but rather how big your team spirit is inside the building.

“We talk about this all the time,” beamed Millican.  “We work in a shop right behind Doug’s house.  He calls it the nitro barn.  Therefore, we work out of the nitro barn.  I mean, it is a nice shop and we are happy.  The shop is based in a little small place called McLeanboro, Illinois and I’m still in Tennessee.  I go back, the shop and the town reminds me of a time when they see you, they know you’re part of the race team.  I really, really appreciate that.”

Millican would be quick to tell you that driving for a former winning driver like Dave Grubnic can relate to what Millican is saying after a run.  It’s a language of their own and I don’t mean just because Grubnic is Australian and Millican is southern born and bred.  It’s more of a seat of pants description from Millican telling the driver Grubnic what the car did or didn’t do.

“The fun part about working with Grubby, being a former driver, he’s always been involved with the tuning of his car.  We can make a run and I can tell him I felt the car vibrate the tires a little bit, but not really — tire shake that feels like tire shake.  He gets it.  He understands what I’m trying to tell him because simply, he’s been there.  He’s done it and he’s done it recently.  That’s been a lot of fun being so open.

“I don’t have to make any excuses to him for anything because he’s driven longer than I have.  We both laugh and he tells me all the time, ‘Man, this crew chief stuff is way more pressure than the driver stuff.’  How do you figure that, I asked him?  If we screw up, it’s on me, as a driver.  Either, I got beat on a hole-shot or I two-stepped it or I red-lighted whatever the case may be.  That’s pretty much the end of it.  Now, as a crew chief, if we go out there and smoke the tires, the crew chief has to spend a week until the next race figuring out why the car smoked the tires.  As a driver, you know immediately what you did wrong and you know not to do it again.  This crew chief thing is a lot harder than being a driver.  A driver has a lot of pressure on him for a very small amount of time.  Then, it’s over with for me.  For the crew chief, he has to get that car ready to go again whether it is next round or next race.”

Joining Grubnic, who is keeping Millican running in the low 3.70s, is Millican’s longest standing member of his team, the one and only co-crew chief of Lance Larson.  The pair have been working together now for over a decade and the bond of mutual respect is immense.

“Lance and I have been working together, I think for 11 years,” said Millican, who qualified second at the Gatornationals.  “Lance is kind of the big brother I never had.  He’s been tuning nitro cars for as long as I’ve been old and I’m old.  I’m 50 years old and that’s pretty unbelievable in just the amount of knowledge he has been a part of and what this guy has seen.  He’s been 25-years clean and sober and you have to commend a guy that can say that.  He’s just a good person and he’s a good man.  He’s an unbelievable teacher.  He loves tuning on these things but I think he enjoys teaching as much as anything else.  The group we have right now is a very, very young group of guys.  There’s many others that Lance has trained and got their start with him.  He’s an amazing guy and he is 100 percent pure nitro.”

The magic of Millican is his ability to connect with the fans and has built up numerous friendships over the years all across the county.  Fans find him approachable and open and he will strike up a conversation with you just as quick as he can write his autograph.

“I really don’t know [why he is such a fan favorite], but one thing I know is how lucky I am to being able do what I do.  My parents couldn’t afford to put me in a nitro car, so I was a fan at the races outside the ropes waiting for Eddie Hill’s autograph.  It was all the guys in the pits I used to look up to like Kenny Bernstein.  Now when I would look out there and see fans, I will go out and sign, if that’s what they would like.  There are times in between rounds when you don’t have time especially on race day.  I want to make sure they have fun and I want to let them know that I appreciate them spending their money to watch us race.

“When you look at social media, I do my dang best to like everybody I can.  I have a blast on Twitter (@claymillican).  I think I have ‘liked’ 96 to 97,000 people.  I get on there and chat with people that I know really well and some are new fans.  I’m just having fun talking with people and race fans.  I love the people online on Facebook and Twitter and the people who come out to see us race.”

Up next for Millican is the tricky 4-Wide NHRA Nationals at zMAX Dragway and it’s a one time, one of a kind event and no matter whether you’re a rookie or a veteran, this kind of racing with all the different procedures can cause other teams to have problems. 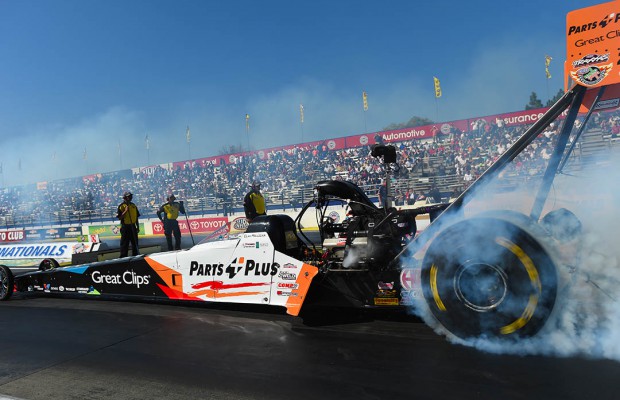 “It’s just different,” said Millican.  “I’ve done it every year with the exception of one, maybe.  The biggest hurdle for the team is trying to get all four cars started at one time and staged at the right time.  We have a limited amount of time the car needs to be running.  It’s burning a lot of fuel, so that’s hard for the team.

“For the driver, we have to make sure which stage bulb we’re looking at and once you get that figured out, then the real hard part comes on race day.  On a typical race, if you smoke the tires seeing your opponent driving away from you, you shut the car off.  Save all that money from an engine explosion.  At the Four-Wide, you are just not racing that other guy in the other lane beside you.  You cannot see them in the other two lanes, so that makes it hard for me being tied directly into the checkbook of the owner.  If we don’t have the funding to keep going, we’re in trouble.  It’s hard because you have to drive that car to the finish line because you can’t see the other cars you’re racing against on the track.  They take the top two on every elimination run.  You might want to punish your equipment.  From a fan perspective, it’s a one of kind event that is an absolute must see.  There’s nothing else like it anywhere.  Four times the nitro cars are four times the fun.”