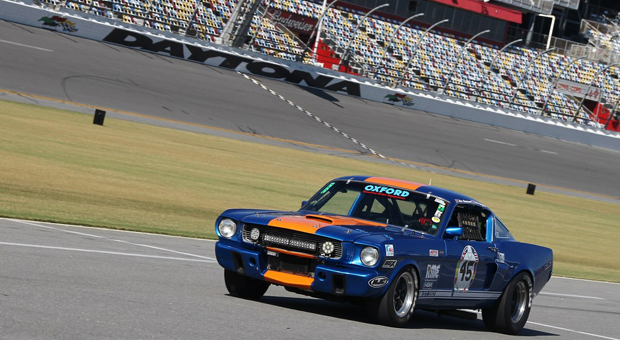 More than 130 cars – each set to run four shifts, in rotation over a 24 hour period, comprise six different era’s of sports cars. It is not a continuous race, but rather sports cars from different eras who take their turns via different classes, competing one hour at a time. Each of the six class winners, which are classified from Group A to Group F, will be determined by the number of total laps completed.

The overall plan was to celebrate auto-racing history. They certainly did that, but along the way, someone MADE HISTORY! Amy Ruman (#23 Red Corvette) became the first woman to claim overall victory in a professional automobile race at Daytona. It was her 5th career win (TransAm Series) and at 40 years young, is a second generation driver out of Ohio (Ruman Racing).

Group F – Paul and John Reisman, USA, ‘06 Porsche Boxster 3400 76 laps (not on the registry “A” must have been a late entry but note that they were entered and drove two cars!)

For the full gallery and write up, head to Hotrodhotline: www.hotrodhotline.com/node/6877/13713/1