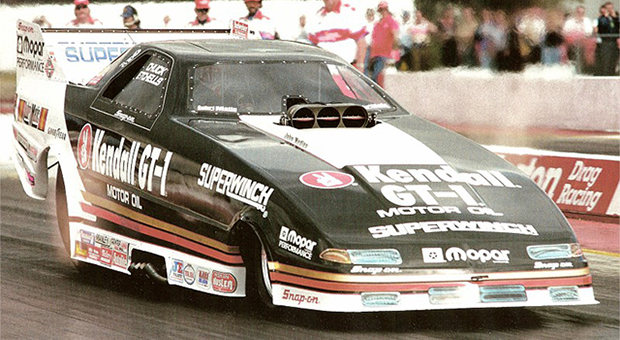 Victory is always sweet, but it’s even sweeter when it signals the success of an underdog in the face of a reigning champ. The 1993 NHRA Sears-Craftsman Nationals at Heartland Park Topeka was just that kind of event in  the moment when underdog Chuck Etchells snatched up the title of ‘First in the 4s’  Funny Car division out of John Force’s hands, as the Putnam, Connecticut native broke the 4-second barrier in drag racing.

1993 marked the Etchells’ first full year of competition on the NHRA circuit.  The sponsorship budget  was extremely limited.  New parts were a luxury not seen on the Etchells’ “flopper” that year, and the majority of their arsenal consisting of used pieces purchased from Top Fuel standout Joe Amato. But in spite of all that, Etchells made drag racing history, and earned himself $25,000 from Castrol. 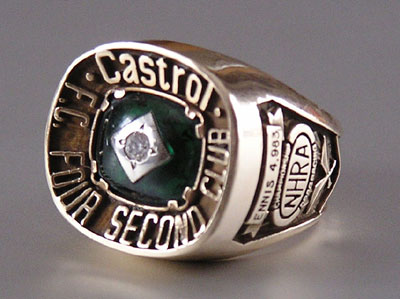 Force was the second pair in the qualifying line that Friday night, preparing to make his historic attempt. But brake problems at the starting line caused NHRA officials to shut his car down.  When it was Etchells’ turn, he calmly readied himself and marched on to a clean, record setting pass.  His run of 4.987 seconds at Heartland Park Topeka shattered the ET National event record of 5.01 at the time, deflating all of Force’s hoopla.

“To this point in time, that day absolutely remains the highlight of my racing career,” reflected Etchells.  “It is a milestone that can never be broken.  The only accomplishment I think could surpass it would have been winning the championship.”

“There was initially no reward for breaking into the fours.  But John (Force) couldn’t bear the thought of not having some sort of carrot out there for doing it.  He had already gotten so close, and had half-track numbers that showed he could get it done.  That’s when he convinced Castrol to put up the money, and they returned the challenge by having him cover half of it.  In the meantime, I knew our car was fully capable.  In fact, we had one run at Englishtown earlier that year where we ran a 5.01 after knocking the blower off at 1,100 feet.  I guess John and everybody else forgot about that one.  When we ran the 98 at Topeka, our numbers up to half-track were identical to that other run.  Who knows – if the fuse hadn’t been too short, we might have run the first 4 in New Jersey!”

Etchells was ecstatic when he got the news at the far end.  He began jumping up and down in jubilation knowing that he was the lone driver to deny Force the record. 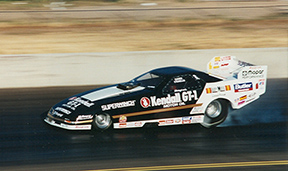 “There are two things I’ll always remember about that day,” stated Etchells.  “In the opposite lane was Gary Bolger driving the Creasy family car.  I’ll never forget him being in the other lane.  The other was after everything was over and we were back in our pits.  (Etchell’s crew chief) Tim Richards was inside the trailer, tapping his foot and chuckling as only the General does.  Then he said ‘I don’t believe it, old blower number 32.’  That blower was never any good on Joe’s (Amato) car.  When I asked him about it, he showed me how it was scored on the back of the case.  Apparently, Tim had sold that blower to Maynard (Yingst) the year before, and that ended up being the one we ran on the car when we went 4.98!”

Yingst, who served as Etchells’ crew chief at the start of the 1993 season had sadly passed away earlier in the year in his team’s pits at the Houston race.

Richards, who came on board as crew chief to work his magic on Etchells’ machine, has his own recollections, and puts the accomplishment in perspective.

“Basically, we weren’t trying to do it, but it was something we were fairly close to, and knew we could do it,” said Richards.  “When the weather took a pretty good turn for the cool, everything fell in place.  Force went out in the earlier qualifying round and didn’t get there, and I knew there weren’t too many other cars besides us who would have a shot at it.”